The Moon Is A Harsh Mistress - Robert A. Heinlein

I had been meaning to check out the work of Robert A. Heinlein for a while, but was a little unsure where to begin. Well, I took the plunge by checking out The Moon Is A Harsh Mistress, first published in 1966.

Basically, the novel is set in the latter part of the 21st century.  The Moon has been turned into a penal colony, to where Earth's convicts and "undesirables" are transported. A group of revolutionaries, with the help of a "self-aware" computer, seek to overthrow the authority of "Terra" in the lunar colony.

The story is narrated by one of the main characters, Mannie, and he employs a curious Lunar dialect, which may take the reader a little while to become accustomed to. However, once this minor issue is overcome, the book will absorb and captivate.

Only a short way into The Moon Is A Harsh Mistress, I found myself rooting for the characters and their aspirations, even if their methods were sometimes questionable. I had emotionally invested in their fate and their destiny.  A diverse bunch, and this engendered some friction, and a strange chemistry. 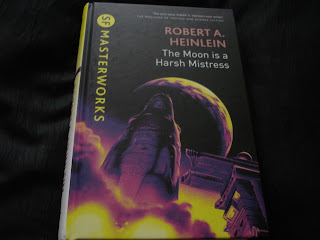 The scientific and technical aspects of the story were for me secondary in importance, although I am not sure that by 2075 computers will have advanced to the degree envisaged here. To be frank, I'm not sure that I would want them to, either.  In truth, I usually reverted to "auto-pilot" mode when elaborate telephone systems and the vagaries of "Mike" the computer were being discussed.

I was impressed by the way in which justification for the Lunar revolt was presented, not just in "abstract" matters of freedom and self-determination, but by bringing ecological issues, economic liberalization and free trade into the equation. This demonstrated a real confidence on the part of the writer,  and added depth and credibility to the story.

Much of the nitty-gritty of how the revolt was organized is not presented in exhaustive detail, and the reader is invited to use his or her imagination, and to read between the lines. From this perspective, the novel does require concentration and open-mindedness, to grasp the rationale and implications of some of the deceptions which are committed by the "revolutionists", for example. A similar approach may be necessary when comprehending the social structures and customs which are shown to have evolved on Luna.

This book has a reputation as a "libertarian" novel,  although I think that conspicuous "preaching" on ideological matters is kept to a minimum.  Rather than being obtrusive, such things are generally woven quite seamlessly into the text, and at appropriate points.

The climax to the novel I found truly gripping, largely because, as mentioned above, I had been drawn in by the characters and the subject matter, and the outcome mattered to me.  The moral questions posed by the story line are not straightforward;they are awkward but timelessly pertinent. My curiosity and my senses had been animated, a good barometer, I find, for how worthy and substantial a work of fiction is.

The Moon Is A Harsh Mistress is well worth a read, and not just for dedicated science-fiction fans.