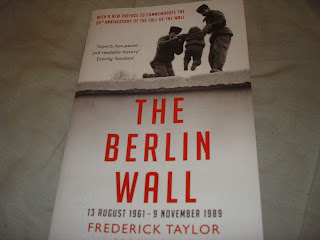 The Berlin Wall, by Frederick Taylor, is a very readable account of the existence of that infamous symbol of the Cold War.

The author is quite trenchant in his opinions and his sympathies, and throughout he puts forward vehement criticism of the East German regime in particular.

I liked the mixture of material contained in the book, which alternates the grand strategy and political machinations with more personal and intimate stories and case studies of how individuals were affected, and their lives shaped, by the Wall.

Of particular merit are the chapters which examine the build-up to the Wall's construction, the tense period which followed, and the dramatic events of 1989 which culminated in the fall of the structure.

Overall, I found this book to be a stimulating and forthright analysis, refreshing in its directness and its sympathetic inclinations.

Posted by Glenn at 14:33 No comments: Links to this post 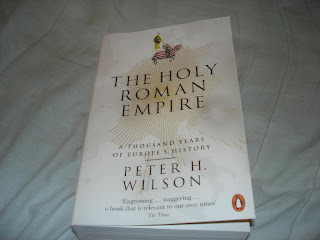 I approached this book with a good degree of anticipation, having been greatly impressed with the same author's work about The Thirty Years War.  It is an exploration of the structure which ruled over much of Central Europe for many centuries.

The first thing to stress is that this is not a straight chronological rendering of the story, but more of a study. This has advantages and disadvantages, as the book's structure might make it heavy going for some people. Nevertheless, it is remarkable for its level of insight and detail.

Throughout the work Wilson challenges many of the traditional historical interpretations of the Empire's role and its efficacy (or lack of it). He focuses on how various aspects of the machinery functioned, and how they adapted over time in response to circumstances, new ideas and threats.

I think that the author manages to get underneath the veneer, and gets to the heart of the Empire's nature, the reasons why it existed, and why it endured for so long.

Personally, I would have liked more material about Charlemagne, for instance. However, the passages concerning "imperial translation" are fascinating and illuminating, as are those which address the Empire's complicated relationship with the papacy.

Some persistence is required to cope with the surfeit of information contained here.  I re-read some sections, and found this beneficial. The trick is not to visualize the Holy Roman Empire as some fully rational, balanced, symmetrical entity.

One element which emerges is how some social groups felt that they fared better under the Empire's arcane arrangements than they would have done under more "enlightened" systems.

The closing sections of the book deal with the Empire's demise in the aftermath of the French Revolution and under pressure from Napoleon.

A very demanding but rewarding read.

Posted by Glenn at 14:27 No comments: Links to this post