It is a curiosity that, in reading about history, I have tended to skip over The Norman Conquest. Perhaps this is because when I was young, 1066 and all that, or at least the "official" version of the story, was constantly rammed down our throats. I recently sought to remedy this anomaly by reading a book by Marc Morris, simply titled The Norman Conquest.

There is some valuable and well-argued material concerning the years preceding the Conquest - the power struggles, the fluctuating fortunes of the various factions, kingdoms and rulers, and the social landscape which existed then.

The account of the "prelude" is highly entertaining, and helps to explain why so many people find this epoch so stimulating. The overlapping and inter-mingling of "Vikings", "Anglo-Saxons", "Normans" and "French" is also part of the draw. The dynastic squabbles and horse-trading, the strategic inter-marriages, the occasional ostracized rebel.

For my own personal tastes, I would have preferred a little more detail about the Viking/Norse origins of the Normans, and how they came to be so powerful and vigorous. In fairness, the author does stress what his remit is, in the introduction to the book. 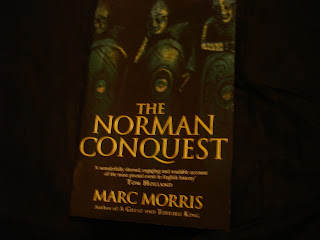 I liked the writer's fluid and economical style, which is erudite but accessible. A good deal of space is given over to assessing and comparing the reliability and motivations of the available written sources. One of the key skills required by a historian covering the Middle Ages is the ability to see through the propaganda and bias of those sources, and make informed deductions and judgments.

The author's interpretation of events feels very plausible and rational, and it passed a kind of test by refreshing my addled knowledge. The power-politics of medieval "France" are documented in compact fashion, and it is surprising how closely linked the fortunes of Normandy and England really were, even well before the Conquest happened. The 21st century may find many of the values and mentalities baffling or quaint, but it makes for engaging reading.

Whilst reading this work, I was reminded just how superficial and even misleading the "history" served up by the mainstream media (i.e. television) can sometimes be. We are regularly reassured that such depictions serve a purpose, by encouraging people to delve deeper, by reading books and studying. I hope so, but remain unconvinced.

The military elements of the story, such as tactics and weaponry, are not deal with in exhaustive detail, and I found this refreshing. The emphasis is on the politics and the grand strategy. In any event, clear and unambiguous information about the major battles has always been difficult to come by.

As a born and bred Yorkshireman, the suffering of, and defiance by, the North of England in the aftermath of 1066 was of great interest to me. Indeed, the chapters about the numerous rebellions against Norman rule were among the most interesting and absorbing sections of the book.

Naturally, the Domesday undertaking comes under scrutiny, particularly its true purposes. The author also employs the areas of architecture (churches, abbeys, castles etc) as a measure and symbol of the changes which were seen. The focus on the allocation and redistribution of land ownership struck a chord with me, as this is an area which has seized my attention with regard to modern times. In the end, a lot of life boils down to land and rents....

Morris undertakes an honest and nuanced appraisal of the merits and debit-sides of the Norman takeover, pointing out areas where the invaders were comparatively "enlightened", and where their impact and methods were less appetizing. It is rather facile to adjudicate on whether things were "better" or "worse", and the author wisely does not try.  How does one quantify such a thing, anyway?  Drawing up a simplistic balance sheet?

There is a lean, urgent and energetic spirit to the writing here. I found it enjoyable and illuminating, and was left feeling a strengthened appreciation of the age and the subject, and how it relates to what came before it, and what came afterwards.