Continuing my exploration of the works of Thomas Mann, I recently read his novel Lotte In Weimar, originally published in 1939.

This novel tells the story of a visit to Weimar by a woman who was the "muse" and inspiration behind the main female character in Johann Wolfgang von Goethe's novel The Sorrows of Young Werther. Charlotte has come to Weimar ostensibly to see her sister, but she becomes an object of fascination for the locals, and she has a reunion with Goethe himself. 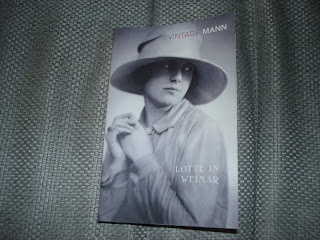 The early chapters are very much consistent with some other Mann novels, with their vibrant and engrossing character, and their richness of detail. The passages which explore the closing stages of the Napoleonic Wars and the parallel political developments in Germany, and their effects on Goethe's family and social circle, are riveting. Conversations between Charlotte and a series of visitors serve as a fascinating examination of Goethe's personality, motivations and world-view.

Subsequent chapters were less appealing for me. Some space is taken up with a conversation which Goethe appears to have with himself, and which is delivered in almost a stream-of-consciousness manner. There are some nuggets of interest in there, though.  The narrative and the focus pick up again when the aforementioned Goethe-Charlotte reunion finally occurs.

Throughout Lotte In Weimar we see evidence of Thomas Mann's social and political concerns, largely told through the person of Goethe and others. The author's misgivings about developments in Germany during Mann's own time find echoes in a critique of  the upsurge of German nationalist sentiment during the early nineteenth century. The fact that this book was first published in 1939/40 must have furnished it with a contemporary resonance.  The political points are eloquently and sharply observed and outlined here.

So this is an intriguing and rewarding read, different in content and atmosphere to what I had anticipated.


Posted by Glenn at 16:05 No comments: Links to this post

Thomas Mann has, in recent years, become one of my favourite novelists, perhaps rivalling only Hermann Hesse in my estimations. The prospect of reading Confessions Of Felix Krull was an enticing one.

Confessions Of Felix Krull is essentially the "memoir" of the eponymous character. Thomas Mann apparently intended to publish several volumes, but his death prevented these plans being realised.

The story is set in the late 19th and early 20th centuries. Felix Krull is a young man from an affluent German family. However, the family falls on hard economic times. Following his father's death, young Felix goes out into the world, to make use of his looks, his wits, his charm and his burgeoning abilities as a con-man.

Much of the early going is taken up with an exploration of Krull's formative years, and how his personality and outlook on life came about.

Some of my favourite passages in the novel concern his time spent in Frankfurt. We gain an idea and an understanding of the social conditions of that time, and we also learn about some of Felix's often lurid adventures and liaisons in the big city.  Felix then moves to Paris to work in a hotel.

I would surmise that the majority of readers will not find the character of Felix Krull very sympathetic, and may conclude that he is downright irritating. Mann may have been writing with tongue-in-cheek, and at the same time making some gentle, and occasionally not so gentle, social commentary. Although the author could have admired some of the character's qualities and talents, I doubt that their respective world-views would have overlapped much.  We are, however, left to interpret or imagine how the writer would have appraised the world in which Krull operated.

The moral ambiguity of the main character is perhaps what makes this book a less rewarding read for me than some other Mann works. The "philosophical" elements seemed more superficial and there was less depth to the characters and the narrative. Maybe the (unwritten/unpublished) subsequent volumes might have redressed the balance in this respect? On the positive side, there are still many examples of Mann's aptitude for detail, imagination and scene-setting.

As this story was "unfinished", the ending to this novel might seem enigmatic or anti-climactic. Mann had set very high standards with some of his previous offerings, but his writing is always formidable, absorbing and invigorating. Very much worth one's time.


Posted by Glenn at 19:29 No comments: Links to this post

This is an intriguing and sometimes unsettling film, directed and written by Chantal Akerman, and starring Aurore Clement.

The story follows a film-maker (Anna) as she journeys across Europe on business. Along the way she has encounters with friends, strangers, relatives, acquaintances and lovers. She listens to the other people as they tell their stories and their gossip, but she seems curiously distant and disengaged. This is a film about isolation, the personal price of success, and about the human condition in general, set against the backdrop of an economically and socially stagnant continent, rendered so by the energy crisis and its effects.

I would say that the world portrayed in this movie is dreary and impersonal, characterised by uniformity, routine and ennui. There is almost a surreal flavour at points, conveying the unnaturalness and loneliness. The relative sparsity of the dialogue heightens the unreality and the discomfort, as does the relative absence of bystanders when characters are interacting with each other.

Aurore Clement is perfect for the role of Anna.  Effortlessly elegant and compelling, but possessing the ability to maintain an impassive visage, which at the same time is curiously evocative.

The impression which emerges is of people fighting against the coldness and superficiality of their lives, seeking humanity and emotional contact amongst the torpor, their discussions fluctuating between the trivial, the profound and the incongruous. This leads to awkwardness, people struggling to be natural, relaxed or expressive. Communication, or genuine communication, is difficult.

Throughout, the writer/director appears to be essaying a commentary on post-war Europe.  The adults of that time are still affected by their experiences, and the legacy of, World War Two. Some of the routines and regimentation of the war, and the post-war epoch, are still evident.

Some of the unreality experienced by creative people is perhaps explored here. Anna struggles to express herself in everyday discourse, so maybe she leaves things to her films;easier that way.

The cinematography and backdrops are in accord with the general tone. Darkness, cold and overcast weather predominate, and they complement the illustrations of the grind and occasional futility of life, the feeling of being powerless and on a treadmill.

Viewing this picture provoked ruminations in me about how much has really changed since the late 1970s. I have a feeling, or more specifically a hope, that things might have changed in another forty years from now, but I fear that even then this work will have a heavy contemporary pertinence.

The dialogue sometimes hints that work blocks out, or assuages, some of our dissatisfaction or disillusionment, at least for a while.  One might enquire what sort of life that is, or is that what life is actually supposed to be, all along?

We are all searching for something, usually fruitlessly.  The sense of transience may persuade some that life is a series of moments, and that we must extract the maximum possible from those moments.

I wouldn't necessarily describe this as a life-affirming film, but it is one which powerfully illustrates forces and factors which we constantly need to be aware of, as they have the potential to damage us, or define us.

Posted by Glenn at 16:24 No comments: Links to this post

This is a movie which I had been wanting to see for some little time, and I was glad that I did.  The work tells the story, set in the late 1970s, of a group of people living in East Berlin, very close to the East/West border. Indeed, the street on which they reside is "bisected" by the Berlin Wall itself. Some have friends or relatives living in the West.

The younger people are obsessed with "forbidden" Western rock and pop music.  One of the characters devotes much of his time endeavouring to obtain, by "unofficial" means, a copy of the Rolling Stones' Exile On Main St. album.

The main character, Micha, is preoccupied with his efforts to win the heart of the beautiful Miriam. Alexander Scheer excels in the role of Micha, and it is his performance which helps make Sonnenallee so endearing and entertaining.

As I watched the picture I found myself trying to work out which parts of the script were satirical and which were intended literally. The writers were undoubtedly poking fun at some of the GDR's shortcomings and absurdities, but I also gained the impression that they were seeking to get across the notion that the state had its plus points.  They may have been hoping to go beyond stereotypical portrayals, and in places could actually have been satirizing the West's often simplistic depictions of East German society.

There are some great "set piece" scenes in the film, some revolving around music, others looking at peculiar or noteworthy aspects of life in the GDR.  I enjoyed the parts which examined the issue of the smuggling of contraband from West to East.

Quite apart from the historical and political sub-texts, this is simply a very engaging and enjoyable film. I am admittedly highly receptive to the subject matter here, but I found this much funnier than most Western films of its type.
Posted by Glenn at 19:14 No comments: Links to this post