Wicked Beyond Belief - The Hunt For the Yorkshire Ripper - Michael Bilton

Wicked Beyond Belief - The Hunt for the Yorkshire Ripper, by Michael Bilton, is a sobering and detailed account of one of the most infamous criminal cases in British history.  The edition which I have was published in 2003. 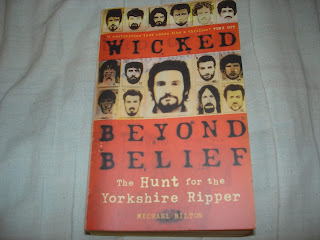 The book is unsparing in its depiction of the terror which unfolded in the North of England from the mid-1970s onwards, the social problems which were prevalent, and the evident shortcomings in the police investigation.

Bilton goes to some lengths to illustrate the nature of the police service in those days, for instance including potted biographies of some of the senior figures in the inquiry.  The thing which comes across concerning the police operations is how overwhelmed they were by paperwork and the sheer weight of information. There was little space to develop distance and perspective.

One trusts that investigative and operational procedures have improved immeasurably since the Ripper case, but we must still be vigilant and inquisitive about those who are tasked with protecting our liberty and our society.

In referring to the social problems which the book portrays, I would say that many of them have not gone away;they have just assumed new guises, and their causes have shifted subtly.

It is easy to despair of the human race when reading of events like those chronicled in Wicked Beyond Belief, but we have to be realistic in seeing that there are no instant remedies. We can only learn, employ reason, and be sincere and honest with ourselves. Some compassion and broad-mindedness about the vulnerable would also not go amiss.

As someone who was a child in Yorkshire at the time of the Ripper murders, Michael Bilton's book brought back for me some of the fear and strain of those years.

Posted by Glenn at 21:53 No comments: Links to this post