I find that reading about exploration is a very good way of restoring some perspective, whilst at the same time allowing a little escapism. Stephen Bown's biography of the great Norwegian explorer Roald Amundsen is both highly readable and illuminating.

I was already aware of Amundsen's thorough and meticulous approach to leading expeditions, so the main revelations for me from this book were the complexity of his character and the turbulent and often precarious nature of some aspects of his life.

Much emphasis is placed not just on the Norwegian's rational and diligent methods, but also on the mentality which he brought to his endeavours. In contrast with the "romanticism" of other explorers of that age, one of Amundsen's major priorities appears to have been to achieve an objective, but also to minimize the risks and dangers by leaving very little to chance.

As I worked my way through this biography, I found Amundsen and elements of his philosophy of life to be quite inspiring, especially his attitudes towards personal industry and its connections to motivation, harmony and well-being. Also, his thirst for knowledge and self-improvement serves as a great example, as a means of averting stagnation and complacency.

Although some definite strands can detected, I also found Amundsen's personality to be rather elusive and difficult to pin down. He was above all, either consciously or otherwise, modern in his outlook, pointing the way to the future in many respects. His attention to detail and willingness to embrace new ideas was combined with his gradual utilization of the media and publicity, although apparently he sometimes found the latter distasteful and wearisome.


The author's writing style I found entertaining and absorbing, if sometimes breathless. The enthusiasm for the subject is palpable, and this gives this work an edge, a zest and a vibrancy which elevate it above the ordinary.

One of the most curious facets of Amundsen's life was his perpetual financial difficulty, and it is a galling irony that he, the most competent and masterly explorer of his generation, was regularly in such dire fiscal straits, whilst others were generously bankrolled by governments and public institutions. This side of the story helps to construct the picture of a man whose life and career were not as orderly and perfect as the legend might occasionally suggest. He sometimes had to improvise in order to get the job done.

It is heartening that this book gives prominence to some of the expeditions which are perhaps less famous in the public consciousness as well as, for example, the race to the South Pole. I was particularly fascinated by the chapters which examined Amundsen's experiments with aviation, and his sojourn in Siberia.

I think that Bown presents a balanced and plausible portrayal of a complex and remarkable person. What emerged for me most of all were Amundsen's restless energy and his constant quest to cover new ground and surmount fresh challenges.

Posted by Glenn at 20:55 No comments: Links to this post

Memories of The Bear - A Biography of Denny Hulme - Eoin Young

I recently read Memories Of The Bear, by Eoin Young, a biography of Denny Hulme, the 1967 World Formula 1 champion.

If one of the measures of a good biography is whether it imparts an enriched understanding and appreciation of its subject, then this particular effort generally succeeds, although I would not regard it as a definitive study.

The book contains many amusing anecdotes, and enough to evoke a strong sense of the nature of motor sport in the 1960s. Much use is made of material from Denny's own magazine columns, and this gives the tales a flavour of immediacy, and of how things were done back then. His laconic humour is rather endearing.

One of the things which shines through for me is Hulme's no-nonsense and pragmatic approach to his chosen profession. He has perhaps been seen as something of an enigma, when compared to some of his contemporaries, but upon closer inspection he comes across as a determined and highly capable racer, who has been rather underrated by history.  His achievements were impressive and numerous, and on reflection we do not need to rely solely on the statistics sheets to assess these. 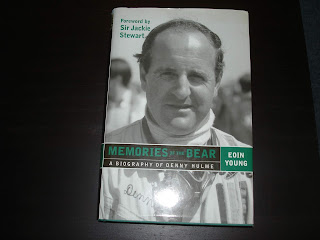 In part due to the era in which he participated, Denny Hulme can be viewed as something of a transitional figure. Old school in some respects, but also very modern in his views on the increasing commercialisation of the sport and on matters of safety.

Highlights of the book include a look at the controversial 1966 Le Mans race, and Denny's mixed experiences at the Indianapolis 500. Not surprisingly, there is major emphasis on the Can-Am series, which provided Hulme with some of his most notable triumphs.

The care taken to examine Hulme's early life, and the values instilled by his upbringing, help us to understood how he turned out as a racing driver. Very much a hands-on figure at the races, and unpretentious in his lifestyle, rather uncomfortable at times with the plaudits and the media attention. I think that some of these traits obscured his genuine merits, and contributed to him being under-estimated.

One area where I think that this biography is slightly lacking is in putting flesh on the bones of his racing career.  What was the background and the motivation behind some of his important career decisions, such as switching teams?  I would have liked more material to join together the racing seasons, and to place them in context. In that sense, the accounts of the racing seasons are a touch dry.

An enjoyable read, but one which left me wanting a bit more.

Posted by Glenn at 16:33 No comments: Links to this post