Led Zeppelin's "concert movie", The Song Remains The Same, has not met with wholehearted approval over the years, often being labelled either lacklustre or self-indulgent, or both. Having not watched the film for quite some time, I recently gave it another viewing, and thought that I would commit my impressions to blog form.

Although the concert footage was recorded in 1973, at Madison Square Garden in New York, the finished product was not released until 1976. The musical content is interspersed and overlaid with behind-the-scenes documentary clips as well as "fantasy" sequences and other assorted visuals.

The first thing to say is that the concert sequences are visually excellent, easy on the eye and technically well executed. The stage lighting is beautifully captured too, in the form of various reds, oranges and greens, giving the images an agreeable warmth and luxury, particularly in the close-up shots. The relatively small size of Zeppelin's stage set also gives the performance an intimacy and a compactness often absent from films set in large venues. 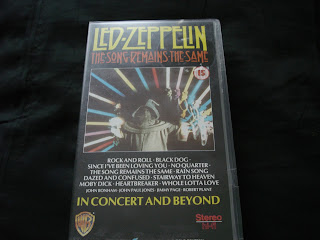 In some quarters I have seen the musical content of The Song Remains The Same uniformly dismissed. I think that this is slightly unjust. To me the quality of the performance is uneven more than anything else. It is true that the band was possibly at its peak as a live act in 1972, a year before this footage was shot, but there is still much to admire here. Even inconsistent and marginally below-par Zeppelin is well worth watching and/or listening to...

The version of "No Quarter" here is perhaps the stand-out piece in the movie. It is more aggressive than the studio version, with a great Jimmy Page guitar solo. Some memorable visuals are super-imposed on the music, including owls and sinister men on horseback. All "very Seventies", but quite effective and diverting, the cliches notwithstanding.

The longer, more "prog"-orientated tracks, especially those from the "Houses of the Holy" album, lend themselves more readily to outlandish visuals and story-telling, possessing a more "cinematic" quality. "The Song Remains The Same" (the song) is another example of this trend, as is "The Rain Song". This portion of the concert set is well suited to the "Arthurian" imagery which accompanies much of it. Actually, watching some of the "videos" produced for the film makes me wonder why Led Zeppelin did not explore these avenues more thoroughly in subsequent years.

The non-musical portions of the film are very much "of their time", but to my eyes they also have a period charm which is rather endearing. The sight of John Bonham driving a tractor is one of the highlights of the whole thing!  The backstage and documentary-style clips very much convey the extravagance, excess and egotism of Seventies rock, which may go some way towards explaining why some "critics" have traditionally found fault with this film.

The sound is pretty good, although some may contend that John Bonham's inimitable drumming is not captured as prominently as it might be. The separation allows the immaculate bass-playing of John Paul Jones to be properly appreciated, and Jimmy Page's Gibson Les Paul and double-neck guitars sound terrific throughout, organic and earthy, sometimes ethereal.  Admittedly,  Robert Plant was perhaps not on peak form vocally here. Was this the period when he was beginning to experience some voice problems?

Some of the performances towards the conclusion of the movie are very strong. "Dazed And Confused" is loose but incisive.  "Stairway to Heaven" is interpreted in an understated but affecting way, with an excellent solo by Page. "Whole Lotta Love" is performed in its familiar format, with more improvisation and ad-libbing in the middle section, although not as much an extended "medley" as on other live renditions.

In spite of this film's reputation and its flaws, I find it quite entertaining and slickly put together, especially when taking into account the various difficulties which were encountered in its production. It is a pretty evocative document of its era.