I often find it illuminating to revisit the films, music and books which I admired during my youth, to see whether they still warrant that praise when subjected to the scrutiny of my older, more analytical and critical mind and worldview.  One such example is the 1962 war movie The Longest Day, which I recently watched in its entirety for the first time in years.

As a teenager, I tended to regard The Longest Day as in some ways the definitive war movie, but looking back the reasons for this viewpoint were quite superficial.  The film's big budget and impressive cast seemed to my callow mind to automatically confer greatness on it, and I did not delve beyond these factors to analyse things in greater detail. So, how did my now more discerning, forty-something eye see things?

The Longest Day tells the story of the Normandy D-Day landings of June 1944, from the point of view of Allied and German servicemen, and French civilians and resistance fighters. The whole theater of operations is covered, from paratroops and glider-borne forces, to fighter pilots and those men landing on the invasion beaches.

One of the first things to observe is the impact of the black and white stock used. This lends proceedings a certain gravitas, as well as conveying in places a sense of pathos and foreboding, and the grim and scary truth about war and combat.

Another wise touch was the decision to have the dialogue in German and French as well as English, with subtitles being employed. This imbues the film with a touch more authenticity. 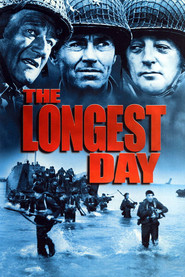 The format of the movie, whereby the story is related from the point of view of various participants, in a multiplicity of roles, helps to bring across the sheer scale and magnitude of events.  I suppose one could argue that this may leave the picture feeling more fragmented, and less intimate, than other ones of this genre.  However, the skill and care employed in characterization and editing means that this is not a massive drawback overall.

This movie by necessity places more emphasis on the preliminary and preparatory phases than most other war films. We gain a hint of the apprehension, excitement and stakes, as well as being introduced to the various characters. These days I tend to find these aspects more interesting than the battle scenes themselves...

Despite the big-budget "Hollywood" status of The Longest Day, I did not get an impression of any major sensationalism, or excessive embellishment or over-inflation of characters. Their trepidation and insecurities seem very "human" and natural.  The general atmosphere is, I would suggest, mildly understated, rather than gung-ho...

It is significant that, on the Allied side especially, the film pays most attention to those at the "sharp end", including both commanders and the rank-and-file "on the ground", as well as civilians.  The scene portraying the conference involving Eisenhower, Montgomery and company is almost an afterthought, with relatively unknown actors playing the relevant parts.

One thing which I pondered on after watching the film was whether it overplayed the extent of German "complacency" and surprise concerning the landings, particularly among the higher echelons of command. On the other hand, there is some attempt to illustrate the nature of the German command structure, the degree to which localised autonomy was constrained from the top, and the recriminations which all this provoked.

The scenes in the hours of darkness, during the early stages of the operation, are perhaps the most evocative and gripping in the entire movie. The monochrome works to powerful effect here. We can begin to get some impression of just how bewildering and frightening it must have been for those people involved.  The sequences featuring  the parachute and glider troops, and special forces and commandos, are very dramatic and compelling.

There is vivid depiction of the improvisation which occurred in the formative stages of the operation, when the best-laid plans had gone awry.  Snap decisions having to be taken by commanders on the ground, and stragglers, or those who were simply lost, joining up with other units. We also see how the Germans reacted to the confusion of those early hours, as the scale of events began to dawn on the high command.

The battle scenes in The Longest Day are not particularly graphic in comparison with more recent war movies. They are though frenetic and intense, admittedly.  There is also some clever and inventive camera-work, with long and wide shots affording a panoramic view of some of the engagements.

Of the acting performances, one which stands out is that of Richard Todd, as Major John Howard. Quietly authoritative and purposeful.

One of the notable features of this film is the number of what might be described as "cameo" or relatively minor parts undertaken by major stars.  The likes of Richard Burton, Henry Fonda and Rod Steiger are among those who perform these roles, and their presence and talent helps to instill real authority and weight.  Another example of this phenomenon which stands out is that of Kenneth More, as an eccentric but fearless beach master.

Of the more substantial roles, a couple really linger in the consciousness.  Robert Mitchum is superb and plausible as an American infantry commander embroiled in the chaos on Omaha beach, showing determination, presence of mind and humanity in his efforts to extricate his men from their predicament.  John Wayne is in his element as the injured parachute commander, being wheeled around on a cart, but displaying a kind of laconic determination and persistence.

I feel that the dialogue in The Longest Day still stands up reasonably well.  There is plenty of dark humour and bathos in there, alongside the standard military discourse, but it rarely descends into the realms of being corny or trite.

A few of the scenes in the picture stand out.  There is a memorable sequence where a group of nuns walks through the middle of a savage battle in order to render medical assistance to Free French soldiers.  Towards the end, there is an encounter between an inexperienced American soldier and Richard Burton's character, a wounded RAF pilot who has killed a German infantryman.  Their conversation, in a relatively tranquil setting towards the end of that momentous day, helps to place the events in some kind of perspective.

The Longest Day has a real scope and sweep about it.  It therefore does not quite have the emotional pull, or pose the distilled and condensed moral or philosophical questions which are characteristic of movies such as The Bridge On The River Kwai.  However, it is a superbly polished and compelling piece of work, with many poignant and fascinating moments.