Recently I have been going through a concerted phase of reading about the Olympic Games, and middle-distance running in particular.  This led me to delve deep into my "archives" to re-read the book "Sebastian Coe - Coming Back", by David Miller, published in 1984.

This is not a biography as such, but it documents that phase in Coe's career from the end of the 1981 season through to the aftermath of the 1984 Los Angeles Olympics. It examines the runner's recovery from two years of illness and injury to retain his Olympic 1500 metres title. 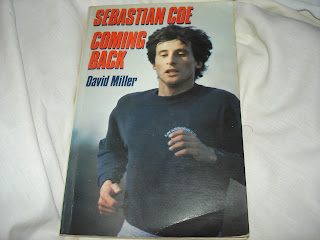 What makes this work doubly interesting is that it covers a period when the sport of track and field athletics itself was going through a time of transition, when commercialism was being allowed to rise to the surface, and when inevitable growing pains were being encountered. Indeed, there are several instances here where those commercial pressures seemed somewhat at odds with the long-term interests of certain British athletes.

Coe was dogged by misfortune and setbacks in 1982 and 1983, and his often turbulent relations with the British press are examined here, as he is written off, and parts of Fleet Street revert to their traditional practice of knocking sports stars when they are down. A hardening of Coe's attitude reached its culmination in his famous gestures to the press box after crossing the finishing line in the 1500 metres final in Los Angeles.

This focus on his dealings with the media is just a part of a wider look at the Coe psyche and temperament. He displayed a resilience and a resourcefulness which many were unaware he possessed, in overcoming adversity to regain past glories. By the time of the '84 Olympics, one becomes aware of a serenity, almost, mixed with a confident resolve to succeed.

Another interesting aspect of this book is its close look at the training methods employed by Coe and his father/coach Peter, and how these were modified to suit the special circumstances of 1984. It becomes apparent how consummately he had peaked for his second Olympics, although I am left wondering how much the problems of 1983 might have actually played a role, by dictating the time when the athlete could begin serious running again.

Reading a book published in 1984 allows one to be "wise after the event.".  The author, for example, assumes in his calculations about the post-1984 athletics landscape that the Soviet Union and East Germany would still exist by the centenary Olympics of 1996. Also, Coe's proposed move up to the 5000 metres event, much discussed within these pages, never really materialized.  Also, he did eventually capture that cherished major title over 800 metres (at the 1986 European Championships in Stuttgart).

An enjoyable and interesting read, this one.

Posted by Glenn at 20:14 No comments: Links to this post

Further to my previous post, here are some additional photographs taken during my recent visits to Kirstall Abbey.... 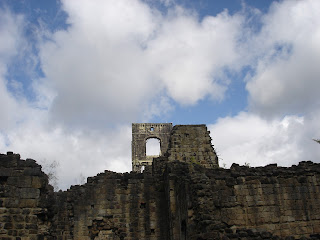 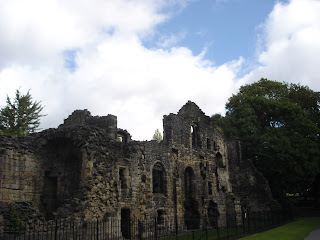 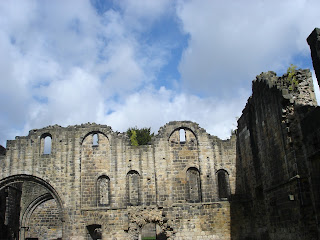 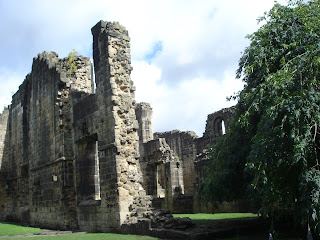 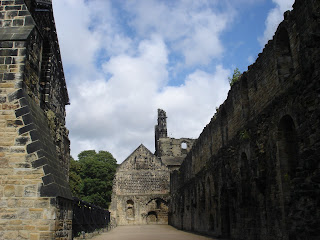 Posted by Glenn at 19:55 No comments: Links to this post

For reasons which need not detain us here, I have recently been in a position to visit Kirkstall Abbey in Leeds a couple of times. Despite the place being in reasonably close proximity to the area where I live, this was my first time there since my school days (the early 1980s, to the best of my recollection), when it was a popular destination for day-trips of an educational and enlightening nature. 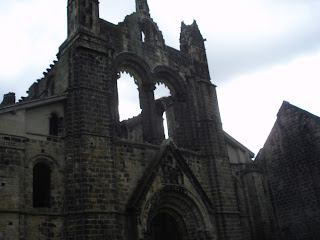 Kirkstall Abbey is a monastery which was founded in the Middle Ages, and it is situated in the northern suburbs of Leeds. Although today's tourist attraction is basically a set of ruins, it is still a fascinating and thought-provoking place to encounter, exuding some eeriness, but also considerable grandeur and spirituality.  The abbey and its grounds are now surrounded by ordinary residential streets and the normal hubbub and noise of modern commercial activity, and this apparent incongruity only makes the tranquility (both then and now) of the former monastery seem more welcome and desirable.... 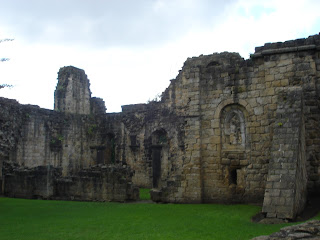 As I slowly made my way through the various sections of the abbey, what crossed my mind was how the scale and intricacy of the architecture and structures, impressive as it is/was, throw into sharp relief the achievements of other, earlier civilizations in terms of engineering,building, logistics and sheer human effort, ingenuity and endeavour. On the face of it, the things constructed and operated by the Greeks, Romans, Egyptians and so forth, hundreds or even thousands of years before, were scarcely less advanced or complex than what was created there at Kirkstall Abbey. 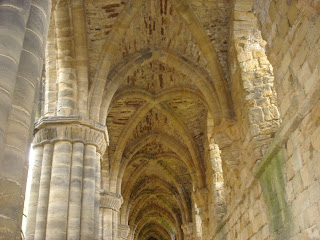 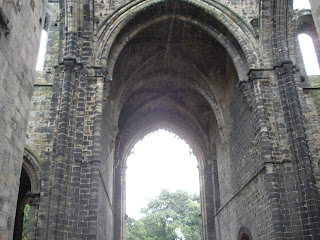 The abbey is yet another of those places which makes me wish that I could have my time again, in order that I could train and work as an archaeologist or a historian! It was quite easy to visualize, looking at the ruins, what the scene would have been like all that time ago, as the monks went about their daily tasks and rituals. The state of some of the ruins also leaves plenty to the imagination, as one speculates what function such and such a row of stones might have fulfilled back when the monastery was active and vibrant. 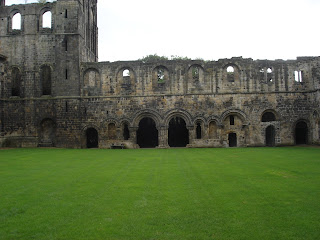 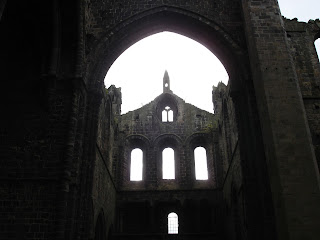 My recent strolls around the ruins brought back memories of my childhood visits, and I sought in some respects to reproduce the atmosphere and spirit of those times, even to the point of buying myself an ice-cream (complete with chocolate flake!). Looking back, as a callow and somewhat shy youth I was insufficiently inquisitive or outward-looking to fully appreciate what I was seeing, or being told, about the abbey and its history. These virtues have only come to me in comparatively recent times. Better late than never, I'm forced to admit...

If you are staying in Leeds, or even just passing through, Kirkstall Abbey is well worth a quick visit.

Posted by Glenn at 20:44 No comments: Links to this post

One of the staples of my childhood television viewing was the British/European version of the multi-sports competition "Superstars". Just recently I have been revisiting the history and the essence of this programme, and I was reminded what an entertaining, worthwhile and intriguing show it was.

I have vague and misty memories of watching the likes of David Hemery and John Conteh appear on "Superstars" when I was very young, and of course the Kevin Keegan cycling incident from 1976 is almost etched into the collective consciousness of the British nation.

The BBC's "Superstars" coverage was presented by David Vine and Ron Pickering, two of the most capable and likeable sports broadcasters of that era. Vine was authoritative, urbane even, and could paint great pictures with words. Ron Pickering, on the other hand, was enthusiasm personified, and his passion for sport and its benefits always shone through in his contributions.

For the uninitiated, "Superstars" pitted competitors from various different sports against each other in a succession of events, including sprinting, cycling, canoeing, weightlifting and the famous (or infamous) gym tests. Points were awarded according to the positions attained in each event. National series thrived in the USA, Britain and elsewhere, and European, International and World championships took place.

As a boy, the European superstars finals held a particular mystique and pull and, funny though it seems now, a taste of the exotic. Vine and Pickering were very adept at conveying the atmosphere in Rotterdam's Ahoy Stadium, where the European showpiece was stage. Special emphasis was placed on the banked cycling track there. Impressionable as I was, I almost gained the perception that "Superstars" was the most important and prestigious sporting event in the world, perhaps even surpassing the Olympics!

It has become a cliche, but a large part of the charm and appeal of "Superstars" was its propensity to propel comparatively little-known sportspeople into the spotlight, allowing them to exhibit their talents to a wider audience, way beyond the confines of their chosen speciality. Classic examples of this were Kjell Isaksson, the Swedish pole vaulter, Ties Kruize, the Dutch field hockey player, and the British judoka Brian Jacks. These men regularly outshone more famous and renowned athletes in this test of all-round sporting prowess.

I vividly remember the performances of Isaksson, the remarkable little pole vaulter. His feats in weightlifting were staggering from some one of his slight build. He was also formidable in the gym tests (parallel bar drips and squat thrusts).

Of course, Brian Jacks became a national celebrity in Britain in the late Seventies and early Eighties, and appeared to receive far more recognition for his "Superstars" achievements than he did for his accomplishments in the world of judo, which were themselves considerable. Jacks' counterpart on the other side of the Atlantic was the remarkable Canadian soccer player Brian Budd, who notched up three World Superstars titles, not to mention three Canadian titles! Budd was a formidable competitor in most of the events on the schedule, and he was also quite a character.

Another hallmark of the UK version of the show was in allowing older athletes such as Hemery, Lynn Davies and John Sherwood to prolong or extend their careers in the competitive arena. Many who grew up with "Superstars" possibly knew little of their respective careers and feats in track and field athletics.

It is interesting to analyze which sports appeared best suited to supplying successful "Superstars" participants. Pole vaulting provided Bob Seagren, Kjell Isaksson, as well as Brian Hooper, who shone at the tail end of the franchise's golden age in Britain.

What made pole vaulters so ideally suited to the challenge of "Superstars" and its format? I guess it had something to do with agility, "pound-for-pound" strength, speed, all-round athleticism and technical aptitude. This ensured that they were consistently good across most of the disciplines contained in the schedule.

Amongst football (soccer) players, the aforementioned Brian Budd was perhaps the exception which proved the rule. Generally, practitioners of "the beautiful game" seemed to lack the power and the strength to compete for outright honours, although they fared very well in areas such as sprinting - Malcolm McDonald famously broke the eleven-second barrier in the 100 metres in 1975. The extra power and muscle of rugby players (from both codes) appeared to make them more suited to the rigours and the nature of the "Superstars" test.

Were there any flaws in the make-up of the "Superstars" event? To me, the UK version seems to have placed undue emphasis on strength and brawn. More skill-orientated sports, such as racquet games or even something like ten-pin bowling or snooker, might have counter-balanced things in favour of those possessing finesse as well as muscle.

The rules barring or handicapping some competitors in their alleged "specialities" also seemed nonsensical and anomalously applied. Handicapping pole vaulters in sprints and 400-metre hurdlers in a steeplechase?  It made matters unnecessarily complicated and I think that a "swings and roundabouts" argument could be justifiably made here.

Allowing people to "opt out" of some events was also wrong in my opinion. I would have just required everyone to take part in every event. This was supposed to be a test of all-round proficiency, after all. Brian Jacks in the sprints and steeplechase would have been very interesting to watch!

But these are very minor gripes. To me "Superstars" in its prime was emblematic of its time, when the innocence of the era allowed such an enterprise to thrive. A great series!
Posted by Glenn at 19:43 No comments: Links to this post