Byzantium - The Surprising Life of A Medieval Empire - Judith Herrin

I have always been fascinated by the Byzantine Empire. It held a certain mystique, partly because I knew relatively little about it. Judith Herrin's book serves as a good introduction, and more.

This is not an exhaustive chronological history - the author examines various instructive aspects of Byzantium in a digestible and entertaining format.  I derived from it an appreciation of how the empire regarded itself as a continuation of the Roman Empire, as well as being the descendant of ancient and classical Greece, and how these factors, together with the co-existence of pagan and Christian elements, helped to carve out a distinct identity of its own.

The author is keen to emphasize the role of Byzantium in allowing "Europe" the time and space to develop and breathe, by constituting a "shield" in the East. She also makes some interesting observations about how the empire's participation in religious matters, for instance with the Slavs, helped to shape the future make-up of the world farther north. 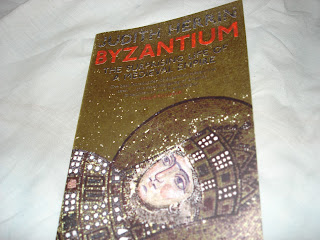 The ebb and flow of the relationships between East and West is deftly and accessibly outlined, even if some of the theological struggles and disputes seem obscure and bewildering to a modern reader. Above all, this book details how Byzantium constantly reinvented itself, and adapted to new challenges and to the emergence of new influences and threats.

Occasionally the legacy of the empire is placed in a modern context, and there is recurrent reference to archaeological finds, and to the signs, reminders and remnants of Byzantium's existence and vitality which still remain today. The author warms to the task of addressing and analyzing the vehement criticism which the empire was subjected to after its demise, especially during the Enlightenment.

As so often happens with these matters, my opinion of the Byzantine world has actually diminished as a consequence of learning more about it.  Dynamic and idiosyncratic it may have been, but the fact that it was influential and intriguing does not obscure some things which seem less agreeable. One is left feeling that the world had even regressed in some respects since the classical era. Byzantium did not seem to fully incorporate some of the more progressive features of the civilizations which it claimed to be the successor of.

Whatever one's personal opinion of the "goodness" or otherwise of the empire, though, this is a well-written and thoughtful introduction to the subject.

Posted by Glenn at 11:07 No comments: Links to this post