For a few reasons, I find that the "classical" and ancient worlds are a more interesting and stimulating field of research and study than more modern historical topics. Because of the relative lack of sources and direct evidence, there is more scope for imagination, debate and ambiguity. 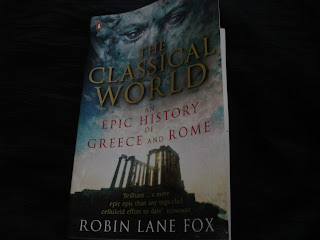 The Classical World, by Robin Lane Fox, is a vibrant, absorbing and at times passionate look at Greece and Rome. Faced with such a vast and complicated landscape, the author wisely operates within certain parameters, using 5th and 4th century Athens and the Roman Emperor Hadrian as benchmarks and reference points of a sort. The changes and upheavals through the centuries are examined through the concepts of freedom, justice and luxury, and how they were interpreted and regulated.

The most refreshing thing about this book is that the author is not afraid of making it clear where his cultural and political sympathies lie, especially where the zenith of classical Greece is concerned. In addition, he succeeds in knitting together the various strands and elements of the subject in a way which is seamless, coherent and plausible. The fragments, when assembled, become real, rather than distant, diffuse and unfathomable.

Lane Fox explores the origins of "classical" Greece, referring back to the time of Homer, and detailing how technological, military, economic and cultural factors brought about social and political changes, by altering the balance of power between the classes. The transition to Athenian democracy is also tackled, and how the democratic ethos benefited the city in its conflicts with its neighbours and antagonists. There is also a compelling look at the spread of Greek influence in both the East and the West.

Of course, no account of classical times, in their broadest sense, would be complete without a look at the Macedonians, Alexander the Great and the "successors". Again, this section of the book blends effectively into the big picture, analysing how the fallout from Alexander's exploits affected the wider world.

The secret to this book's allure to me was the blend of enthusiasm, knowledge and authority of the author. His humane, enlightened and principled approach shines through. The classical and ancient worlds are enchanting for the casual observer, but that is nothing compared to how they look and feel when studied and portrayed by a figure possessed of insight and understanding, not to mention a graceful and potent way with words.

The recurring passages about social structures I found pertinent on more than one level. They show how things were, and how flaws still remain in our time. Our generations have less "excuse".  One is also reminded about the pivotal nature and role of the ownership of land...

Often, the phases of history covered by this publication can seem abstract; unreal and threadbare. Lane Fox manages to make them appear as vivid and relevant as the Napoleonic Wars and the Reformation. It seems to me that this was achieved by a combination of admirable focus and plausible interpretation of matters which are subject to endless scholarly dispute.

There is some highly intriguing material about the periods when Macedon, Rome and Carthage overlapped. The odd myth or popular misconception is debunked or dispelled along the way, too. The author also entertainingly points out the differences between the cultural lives and political ethos which prevailed in the various city-states and regions.

The chapters on the Roman Republic, and what came in its wake, are excellent in their level of detail and their erudition. Roman times, in comparison with the earlier Greek world, arguably contained less to be idealistic or enthused about, but they are hugely instructive for students of history and human nature. Rome may have been more "exciting", in a visceral sense, but Athens commands more fondness and admiration.

Throughout The Classical World there is considerable focus on the artistic and cultural consequences and accompaniments of major events, and how the Greeks and Romans saw themselves, as reflected and depicted in art, ceremony, architecture and ritual. Of course, these forms constitute much of the tangible and retrievable evidence by which we appraise and interpret those years.

In summary, this work is hugely enjoyable, imaginative and heartfelt. A stimulating and illuminating read.

Posted by Glenn at 19:25 No comments: Links to this post

After thoroughly relishing two of Thomas Mann's novels, The Magic Mountain and Buddenbrooks, I decided to move on to Doctor Faustus, published in 1947.

Doctor Faustus tells the life story of a fictional composer, Adrian Leverkuhn, through the narration of his friend Zeitbolm. The narration itself is delivered against the background of the unfolding horrors of the Second World War, allowing much scope for parallels with the time in which the events of the story actually occurred, and with the fate of Leverkuhn. The composer's fate or destiny are not blatantly employed as a direct metaphor for those of Germany, or vice-versa, but the implied comparison adds depth and lustre to the novel. 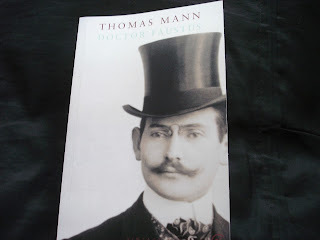 In the earlier chapters there is much musing on intellectual, cultural and socio-political matters. At first reading, these can seem like tangents or diversions, but they make sense in the end, both in terms of how the plot develops and in providing some background context on the times in which Leverkuhn, Zeitbolm and their contemporaries lived and worked. They serve too as indicators of how the composer was beginning to stand out from the crowd even in his formative years, in his outlook on life and culture.

In stating the above, I must confess to having found Doctor Faustus quite heavy going up until around the halfway point. Certainly when compared to the more "fluent" and accessible delights of The Magic Mountain and Buddenbrooks, it can feel like this one takes an inordinate amount of time to "happen". The writing style and language are more impenetrable and less flowing.The passages which abound with musical technicalities, theory and jargon may not be to everyone's taste. Concentration and persistence are required, but one is rewarded towards the conclusion, as the fog disperses.

My impression, rightly or wrongly, was that Mann (via the narrator) left the main aspects of the story, namely Leverkuhn's mental afflictions and his supposed pact with sinister supernatural forces, ever so slightly ambiguous, and up to the reader to weigh and interpret.

As with the other Thomas Mann novels which I have encountered, the characters have depth and plausibility, and the author goes to great lengths to illustrate and convey their traits and characteristics. As this story progresses, the social circle of the composer and his associates becomes more familiar and intriguing, more central to the narrative,  and there are a few notable sub-plots, which enrich and augment the picture considerably by vividly depicting the social mores and hang-ups of this artistic and academic "community".

So, not as immediately enjoyable as the other Thomas Mann novels which I have read, but an imaginative and stimulating piece of work, displaying all the hallmarks which make him such an important and powerful writer.

Posted by Glenn at 12:03 No comments: Links to this post

In the past three or four years, I have had the good fortune to read some wonderfully informative and entertaining books about history, predominantly covering the history of Europe. "Vanished Kingdoms - The History of Half-Forgotten Europe" by Norman Davies is a worthy addition to that list. In essence, the author selected a number of defunct realms and kingdoms, some of which, directly or indirectly, either had a sizeable influence on the future course of events, or represented a staging post, however obscure, on the path to what we have today. Others are just interesting for their own sakes. Each state is allocated its own separate chapter. 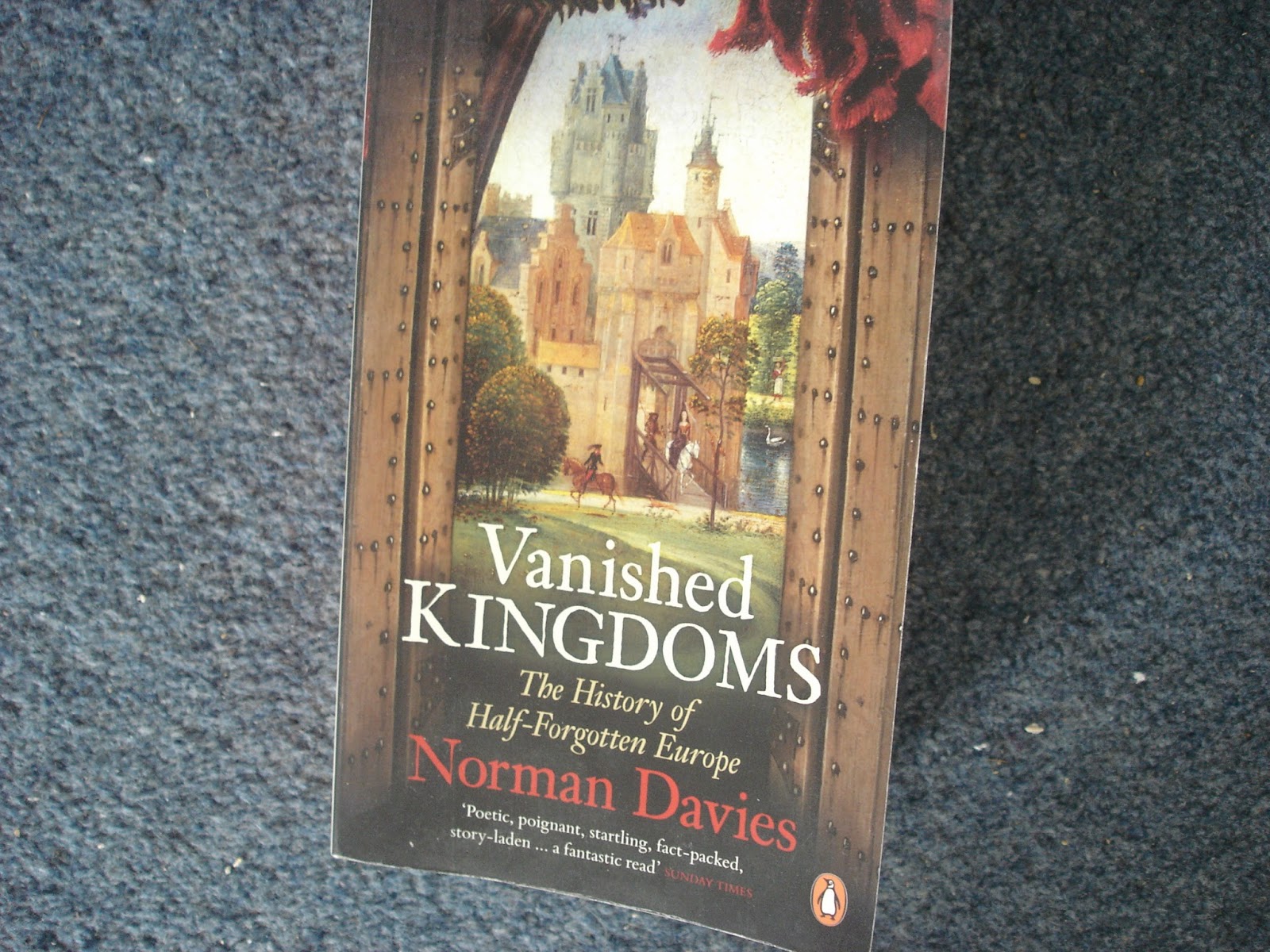 At first. some of the choices can seem a little off the beaten track, but they all are compelling and thought-provoking in their own way. Medieval (and early Modern) Europe can be a daunting tapestry, but this book helps to fill in a few gaps, and create perspective and an enhanced understanding. The "bite size" format is also an asset. "Vanished Kingdoms" doesn't just give us a portrait of a particular region or political entity, but also broadens and enriches our view of whole epochs. Times of transition, turbulence and change.

"Burgundia" was perhaps my favourite of all the articles, as it helps to clarify the post-Charlemagne carve-up, and how the beginnings of modern France, Germany and Switzerland took shape, as secessions, horse-trading and expansionism did their work . This section for me is the heart of the book, as it encompasses the early medieval period, through to the growth of the Holy Roman Empire, and touches on papal schisms and the Hundred Years War.  Also Burgundia played an oft-forgotten part in the European Renaissance, and the rise of the Habsburg family, and it has a certain enigmatic richness and dynamism about it.

The "Aragon" section incorporates the struggles against the Moors (Reconquista) and the eventual "unification" of the Iberian peninsula, as well as touching on several other strands of Mediterranean and broader European history. Many of the stories told in the different chapters overlap, but the sagas are detailed in such an interesting and imaginative way that they never feel repetitive.

I was surprised at how brief the chapter on "Byzantion" was, but that is one of the delights of this book. It does not conform to any set pattern, and is full of twists and pleasant surprises. One of my tips for enjoying a book such as this is to avoid putting pressure on oneself to photographically memorise dates, names and chronologies.  Just absorb the erudition and the words, and the general thread will make sense in the end. The mix is further leavened by the writer's occasionally whimsical and laconic style.

Davies is careful to illustrate how the remnants of the past are preserved and interpreted today. Also, he examines the often divisive and contentious legacies of these defuct states, and the passions and emotions which many of them continue to arouse at a local and international level.

In summary, "Vanished Kingdoms" is a charming, absorbing and entertaining look at some political entities and territories which have disappeared from the map over the centuries, and in its own way traces much of the story of Europe from around the time of the collapse of the Roman Empire through to the present day. One of those works which exudes the author's enthusiasm for his subject, and the diligence and scope of his knowledge and research.