Napoleon: The Man Behind The Myth - Adam Zamoyski

I have read several biographies of Napoleon Bonaparte, but this offering by Adam Zamoyski was one I simply had to check out, having enjoyed one or two of the author's other books. 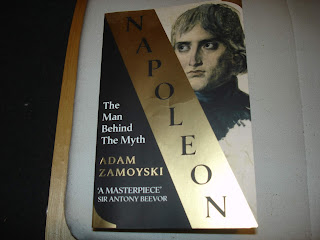 Napoleon: The Man Behind The Myth takes an emotionally detached view of the great man, and is outwardly quite "dry" when compared to such biographies as Andrew Roberts' Napoleon The Great. There is little of the hero worship or hyperbole which sometimes pervade chronicles of Napoleon's life.

The point which Zamoyski appears to be making is that Napoleon was very much a man of his time, who did have some outstanding qualities, but was not a superhuman. I detected a certain scepticism about some features of the French Revolution and its aftermath, particularly concerning how certain principles of the Enlightenment were implemented practically.  Having said all this, I would emphasise that this is a balanced and convincing account, and the author points out many instances where Napoleon was in the right or vindicated by the course of events.

One of the central themes in this book is the notion of Bonaparte "saving" the Revolution, and the tension between revolutionary ideals and the measures which Napoleon deemed necessary to stabilise France after he assumed power.

As hinted at before, the book is written in quite a sober, measured style.  However, what it possibly lacks in "fireworks", it more than makes up for in depth, and genuine insight into political realities and the merits of events and initiatives.  The book can seem to start slowly, but if the reader persists he or she will be richly rewarded.

The biography is strong on strategic matters, but it does not dwell on military intricacies. One will find that certain major campaigns or episodes are not covered in the minute detail which might be expected.  Even in "condensed" form, however, the chronicling of events in Russia in 1812 is still harrowing.

A feature which recurs is the "obsession", especially after 1804, with harnessing monarchical trappings. As someone who has grown very inimical to such things, I found myself very receptive to the author's observations. A lot of care is taken to illustrate Napoleon's exercising of power and how he interacted with those around him, including his often wayward relatives.  Another key aspect of the interpretation is how the subjects of "honour" and "saving face" loomed so large, and how Napoleon became trapped by some notion of being guided by destiny and his "star".

So to conclude this is a highly authoritative and balanced assessment of Napoleon's life and career, which is underpinned by the author's sure grasp of the big picture.

Posted by Glenn at 13:41 No comments: Links to this post

This movie, directed and produced by Werner Herzog, tells the story of a group of 16th century Spanish conquistadors who embark on an expedition in the Amazon to discover the "golden city" of El Dorado.  Klaus Kinski appears in the title role.

Some of the visual imagery in this film is quite spectacular, and reminded me somewhat of the content of some of Herzog's documentaries. Man's struggle with nature is strongly projected, as is his insignificance and helplessness when faced with the strength and pitilessness of the elements.

The plot basically centres on Aguirre's taking control of the group on the journey, in the face of mutinies, setbacks and tragedies. It is easy to conclude that the film becomes bogged down, or loses its clarity and direction, in its middle section, but these sequences are vital to understanding the narrative and the motives of the participants. With these dynamics thus absorbed, the conclusion to the work becomes more rewarding and digestible.

A large part of the fascination of this movie is its examination of power dynamics and personal megalomania, even when largely abstract and pointless, within an isolated group. A microcosm, perhaps, of human social structures and how they are affected by human nature. It also says something about the differences between real power and that which is symbolic or merely imaginary. Power can sometimes be desired and acquired for its own sake, as an end in itself, even where there appears to be no tangible objective or result.

Clearly, for a film set during the early days of European colonialism, one is forced to ask who were the civilised people, and what constitutes "civilised" behaviour. One can argue that the Europeans were self-appointed arbiters.

So overall this is a powerful, visually spectacular and engrossing film, with great, atmospheric music courtesy of Popol Vuh.

Posted by Glenn at 23:18 No comments: Links to this post