Fangio: The Life Behind The Legend - Gerald Donaldson

Furthering my campaign to revisit some of the motorsport-related titles residing on my dusty bookshelves, I recently re-read Gerald Donaldson's 2003 biography of the great Argentinian driver, Juan Manuel Fangio.

Fangio still holds a special fascination and a particular aura, matched perhaps only by those of Ayrton Senna, although they were quite different people. Fangio was revered by his peers, and still represents something of a benchmark, as much for his human qualities as his consummate skills behind the wheel of a car.

His upbringing was in stark contrast to that of today's stars, and indeed to most of his contemporaries. In addition, his racing apprenticeship was unusual, and may have helped to equip him with the qualities which separated him from his competitors when he embarked on his international career. 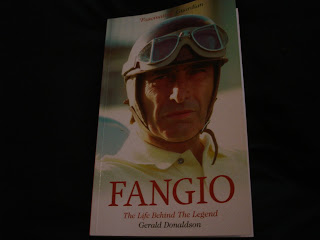 The early chapters are an intriguing window on the world of the early twentieth century, when motor vehicles were still a relative novelty, and in the infancy of their technical development. The picture which emerges is of an early life characterized by the inculcation of certain imperatives, such as the importance of hard work.  Even the early years suggest Fangio's hallmarks of mechanical sympathy, adaptability and resourcefulness.

A crucial part of the story is Fangio's participation in the epic South American road-race marathons. The author unfurls evocative  accounts of the sheer scale of these undertakings, the hardships which were undergone, and the perils and hazards which confronted the competitors. The range of emotions and environments which he encountered must have been character-building. Describing the dramas, the surroundings and the sensory experiences is a strength which is noticeable in some of Donaldson's other books, and those skills are well employed here.

This biography paints a picture of the tenor of an epoch, where improvised machinery and improvised racing schedules were the norm. Also, the comradeship and friendly spirit which prevailed among the drivers throughout comes across strongly.

Fangio seems to have been a self-made man, also self-taught to some extent. From humble origins, a strong work ethic had helped to instill a resilience of character which was crucial to his success. The author does not portray the man as some kind of saint, but his flaws and weaknesses were evidently less pronounced than those of most people, and a practical, pragmatic approach served him well. It also appears to me that Fangio combined old-fashioned virtues with the more entrepreneurial spirit of modern times. A more complex individual than is sometimes made out, perhaps.

The book contains some interesting material on that "lost" period between the end of the Second World War and the 1950 inception of the World Drivers' Championship. It is sobering to be reminded of the frequency of fatalities and serious injuries back then, both to competitors and spectators.  The stories of the Grand Prix races are related entertainingly but sparingly, and they capture some of the essence of what was still a "heroic" age. Indeed, some might contend that the "heroic age" came to a close when Fangio retired from racing.

There is a little insight into Fangio's character, and his philosophy of life, via quotes and anecdotes. These focus on his means of coping with danger and challenges, and with the nature of competition. An element which permeates these pages is just how much physical discomfort the drivers of that period had to withstand, whether through primitive, ill-handling machines or via the elements. Comfort was still some way in the future.

This biography is compact and balanced, although I don't think it is quite as fluent and impressive as the author's books about Gilles Villeneuve and James Hunt. It will, however, enthuse the reader about the man and the era in which he competed so ably and nobly.
Posted by Glenn at 09:28 No comments: Links to this post

Whilst sifting through numerous old books on my shelves, I came across "The Last Road Race", by Richard Williams, originally published in 2004, which tells the story of the 1957 Pescara Grand Prix.

The premise of the book is that the race represented the closing of an era, in that it was the last World Championship Grand Prix to be staged on a particular type of circuit, and in a certain set of conditions. It is a compact work, packed with details and anecdotes, and it contains several evocative passages.

Only a relatively small proportion of the book is actually taken up with the Pescara race itself.  Much of the space is given over to scene-setting, with portraits of some of the key participants in the event, and analysis of the key trends which determined its outcome, such as the emergence of the British constructors.  In some ways, "The Last Road Race" also functions as a brief history of motor racing in the period up until 1957, a chronicle of how that point had been reached. 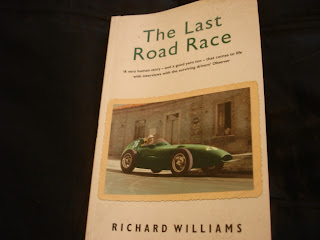 The tenor of the era comes through, such as the more relaxed, informal feel of less regimented times and even through the improvised arrangements for travel, accommodation and so forth. There are some amusing stories about these aspects.

Much of the story revolves around Stirling Moss, either directly or indirectly.  Whenever I read anything about Moss, my admiration for the man rises. His professionalism, his talent and his energy combined to make him a compelling study.  There is some illuminating material how about how he organized himself, and how his approach differed from some of his peers. Moss comes across as a transitional figure on more than one level.

In addition to Moss, another person who impresses is Tony Brooks. An intriguing character, whose opinions and frank observations about racing and life are always worth reading.

I discerned quickly that the drivers had varying views about racing, their motives and their anxieties. Some were at home on the classic, perilous natural road courses, and bemoaned the sterility which later infiltrated the sport. Others were candid in expressing their unease about some of the conditions which they raced under.  Less romantic than some of their contemporaries, they were more pragmatic and business-like. Not everyone later complained unfailingly that things were better in their day.

From today's vantage point, the 1950s feel like a fabulous period for racing. Post-war optimism and renewal, the rise of the British drivers and teams, and the beginnings of technological upheaval, overlapped with the remnants of the pre-war age. This book manages to capture much of that atmosphere and excitement.

The actual competitiveness of the racing was often lacking, but the spectacle was enticing, and that seemed to be enough. It was real theatre, this dimension being heightened by the greater contribution of the driver, and the manner in which that contribution was more immediately visible.  Yes, some things in today's world are better, but those far-off days had an innocence and a raw drama about them.

Also, the media and the public did not constantly agonize about "the show", and subject it to minute scrutiny. In some respects the audience, and expert observers, had a more nuanced and sophisticated view. Attention spans were longer, and there was less pressure to pander to some perceived requirement to "entertain".

In 1957, the world was already beginning to change, but old-world courtesies lingered, and some timeless values were scrupulously observed. The drivers from that era were a diverse but likeable and noble group. They were not perfect, and had their flaws like all of us.

"The Last Road Race" is an enjoyable and stimulating document on a place and a time, written with enthusiasm and some style.

Posted by Glenn at 11:18 No comments: Links to this post

The Amazing Summer of '55 - Eoin Young

Just recently, I surveyed some of the unread books piled up in a corner of my humble abode.  One which caught my attention was The Amazing Summer of '55, written by the late Eoin Young. This tells the story of the dramatic, tragic and turbulent motor racing season of that year. 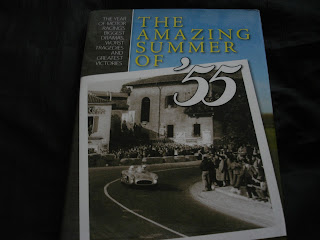 The book takes the form of a series of articles, arranged in chronological order, covering the pivotal racing events of 1955. Extensive use is made of quotes from participants and excerpts from diaries, giving many of the episodes a genuine rawness and immediacy. The individual articles are concise and breezy, and they cover not just the "obvious" topics and incidents, but also some more obscure and less-publicized things which occurred during the year in question.

Human interest stories are combined with technical details.  The informality and relative lack of regimentation of the mid-Fifties shines through, although doubtless the "old hands" of that period bemoaned how things were different from previous times.

This was an intriguing epoch, not just in motor racing but in the wider world. The remnants of the "pre-war" world were increasingly in collision with elements of modernity such as technological progress, scientific advances and social change. The stories concerning Ruth Ellis and James Dean help to illustrate and emphasize the latter.

The epic and momentous nature of the Mille Miglia never ceases to impress and captivate, and it is accorded due prominence here. There are some evocative quotes and passages, and amusing anecdotes.

A strong quality of this book is how it covers the broad canvas of motorsport, not just the Grands Prix, but also sportscar racing in all its facets, and also the Indianapolis 500. One can get a real flavour of the culture of racing back then, and the attitudes and motivations of the people involved.

Of course, the disaster at Le Mans in 1955 figures strongly in this work, and the horror is powerfully evoked. Some interesting material is featured relating to the aftermath, the ramifications and the investigations, especially on the response of Mercedes to the tragedy.  These sections, and also the chapter examining the Tourist Trophy race at Dundrod, highlight perhaps most acutely the differences between now and then.

I worked my way through this book through it very quickly, which is generally a good sign. It is the kind of book which prompts the reader to seek out additional information about some of the topics covered.  A lively and enjoyable read.
Posted by Glenn at 23:23 No comments: Links to this post