When the recorded output of the Beatles is discussed, the 1967 album "Sgt. Pepper's Lonely Hearts Club Band" is a touchy subject. Some rather lazily proclaim it as "the greatest album of all time", while others seek to distract attention from its (minor) shortcomings by emphasizing the record's cultural and social impact and importance.

I first heard "Sgt. Pepper" in its entirety about 25-30 years ago, when a member of my family purchased the vinyl version. I was somewhat underwhelmed, although admittedly my musical palate was woefully under-developed at that stage, and I had yet to appreciate the greatness of the Beatles in general. To my ears, it all seemed a little lacking in drama and "punch". In those days, anything which did not feature blazing guitar riffs and power chords I treated with a touch of disdain. 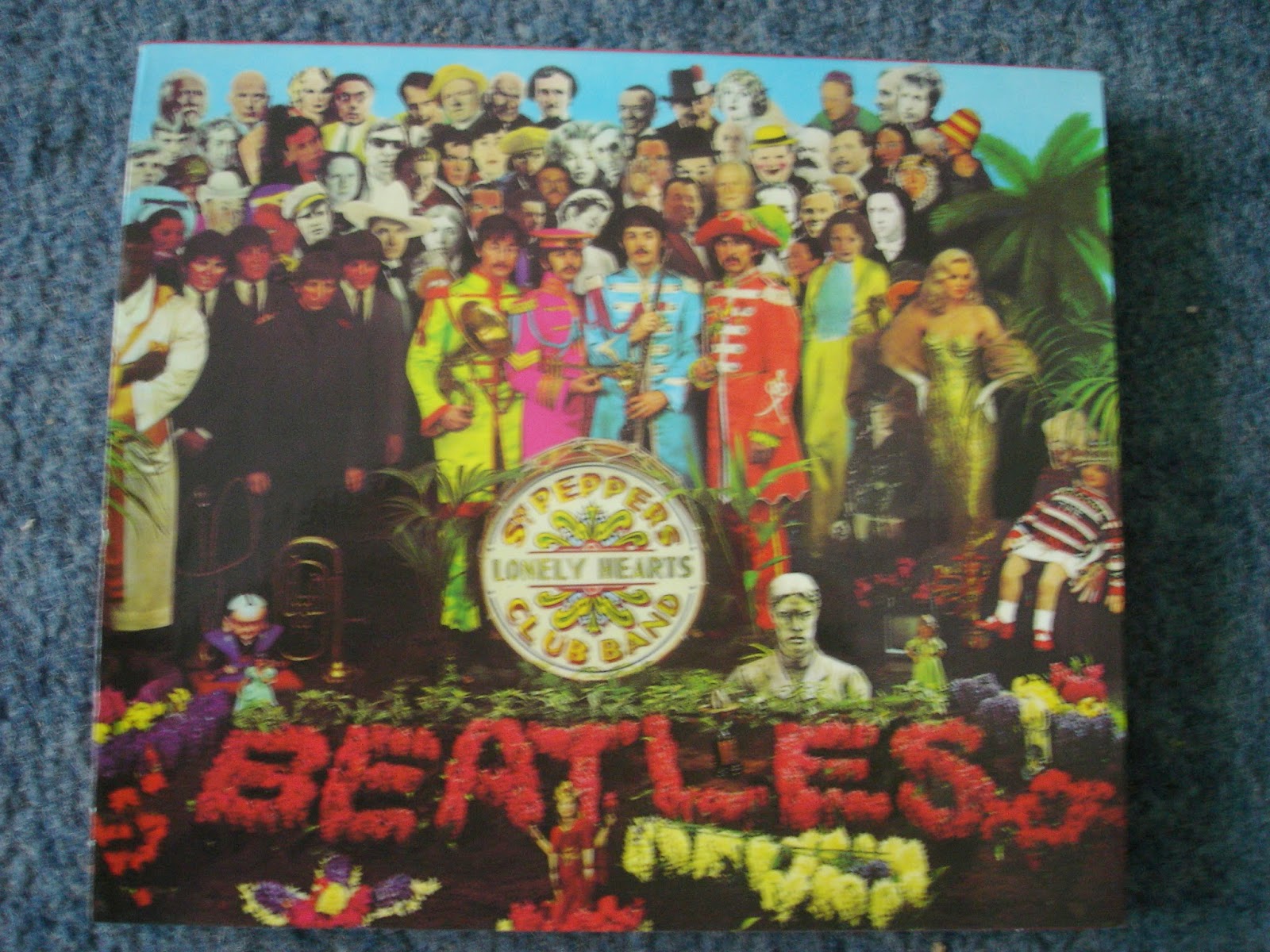 I re-appraised the album again in the mid-1990s, when the whole "Anthology" project re-ignited my interest in the Fab Four, and I explored their entire back catalogue. My assessment was more nuanced, and my by then more discerning ears were more receptive, but it still did not live up to the "the hype". In fairness, by that stage "the hype" was being counter-balanced by the surfeit of Beatles scholarship available, much of which placed "Sgt. Pepper" in its proper place, and tended to champion "Revolver" and "Rubber Soul" instead. One is tempted to wonder whether that line of thinking itself has now become tired and dated.  Personally, these days I prefer "The White Album" and "Abbey Road", but that's another story!

One thing I would say is that "Sgt. Pepper" cleverly "tricks" people into thinking that it is better and more substantial than it really is. This is partially due to the lavish packaging, the "aura" of a concept and the astute sequencing of the tracks.

Posted by Glenn at 19:06 No comments: Links to this post

Many of us, myself included, trace our existence via the music which we were listening to at various stages of our lives. This could either be a song which happened to be in the charts at a particular time, or tracks which for whatever reason have a certain resonance, reminding us of happy (or sad) times, or evoking our state of mind.
The first time that I can remember truly relating to songs, and seeing in them some semblance of inspiration or "meaning" was in my mid-to-late teens, when many different pressures and emotions conspire to give rise to a need to "belong", and find spiritual outlet, however imagined and superficial.
It makes me cringe now, but the first track which I, and my circle of friends, saw as a personal anthem, was "Livin' On A Prayer" by Bon Jovi. This may have just been escapism or peer pressure, and the blue collar romanticism in the lyrics now makes me nauseous. My social and economic situation bore very little relation to the characters depicted in the song. "I Just Died In Your Arms Tonight" by Cutting Crew fulfilled a similar role, both at the time, and in retrospectively evoking a sense of time and place. This was clearly the naïve optimism of a confused seventeen or eighteen year old mind at work, although in some respects it was healthy that I was latching on to such harmless if shallow subject matter. It was preferable to existing in some vacuum.

From my late teens until my late twenties, my life fell into a torpor, and music served primarily as an agent to fill the void, but acting as a neutralizer, simply cancelling out a negative. I had by this time begun to explore the work of singer-songwriters such as Neil Young and Jackson Browne, but the impact of their lyrics was generally secondary in importance to the melodic invention and subtlety on display. I was looking to the sound to anaesthetize me, not the words or messages to inform me.

Of course, when one's outlook and circumstances alter, music which previously appeared relatively innocuous and distant can suddenly take on a major piquancy and relevance. This began to occur in my case about fifteen years ago. I often think that the more introspective songs of Jackson Browne (Farther On, Sky Blue and Black, Sleep's Dark And Silent Gate, The Pretender, Fountain of Sorrow, These Days) are speaking only to me, and that they could have been written to document the course of my life and my mental state over the past decade-and-a-half. I could say the same about a few of the compositions of Gene Clark. Once the seed is sown, and we are "convinced", it is difficult to dispel such notions, even when evidence to the contrary looms.

Is this just wishful thinking, and intellectual dishonesty, a desperate and misguided attempt to avoid dealing with one's demons (and confronting reality), by taking refuge in somebody else's sentiments and inner thoughts?

I make take a (retrospectively) jaundiced view of the musical preoccupations of my late teens and early adulthood, but in seeking to "intellectualize" and rationalise my latter-day inclinations, I may be subjecting myself once again to delusions, if of a different type this time.

Perhaps the "soundtrack" to our lives should concern itself less with finding "poignancy" and "meaning" in lyrics, and more with the sometimes overlooked  and unnoticed capacity of music (i.e. the sounds themselves) to sooth and uplift us spiritually. This path also entails less anguish and pretence than the other approach....

Posted by Glenn at 13:17 No comments: Links to this post

One of the joys and satisfactions of rock music is being able to follow, and identify with, the thought processes of the artist, and chart their growth (or regression), and the fluctuating course of their personal fortunes and attitudes. This is easier when one is dealing with singer-songwriters.

The "singer-songwriter" genre can arguably trace its roots back to Delta Blues, or even further back to the days of wandering minstrels and troubadours, and the early days of rock n roll saw the emergence of such figures as Buddy Holly and Eddie Cochran. However, if we are thinking in terms of the modern "rock" scene then, like so many things, it began with Bob Dylan.

Not only did Dylan make it viable and credible for people to express themselves creatively entirely through their own compositions and ideas, but he also laid down many of the ground rules, by giving validity to the notion of such views and observations being poured out in a challenging and poetic way.

The mental stimulation in absorbing the work of singer-songwriters is to a large extent in the concentration of the thoughts and interests of one person. This is not really possible in the case of groups and bands, even those whose members write tunes prolifically, because the message is often confused and fragmented, reflecting the diverse personalities and outlooks of the people who make up the ensemble, and the compromises made in the creative process. With a single creative engine, the message can still be occasionally confused and contradictory, but leaves the listener safe in the knowledge that this is the psyche of a single individual, with all its idiosyncrasies and foibles.

Although there have been great singer-songwriters in more recent decades, the "genre" enjoyed a golden age in the period from the late 1960s through to the mid-1970s, on both sides of the Atlantic. Many of the foremost practitioners hailed from the folk movement, and folk's capacity for, and tradition of, storytelling and social conscience stood them in good stead in this new environment. Some of these figures achieved both critical acclaim and commercial success (Neil Young, Joni Mitchell, Jackson Browne), while others had to be content with admiration from their peers, long-term influence or royalties from cover versions of their songs (Laura Nyro , Gene Clark, Tom Waits, Nick Drake.).
The zenith of the 70s singer-songwriter scene probably occurred around 1974, when several prominent artists released seminal works. Jackson Browne's "Late For The Sky", "No Other" by Gene Clark and Neil Young's "On The Beach" are just a few which instantly spring to mind. All different in their own ways, but each representing a kind of peak. "No Other" and "On The Beach" are arguably untypical of their architect's general output, and partly for this reason stand out all the more.
In the mid-1970s the lustre of the "confessional" and "introspective" genre faded. Most of what was there to be said had already been said, and the artists naturally began to branch out and explore fresh territory.  The social climate was also less conducive to what some regarded as self-indulgent navel-gazing.
The appeal, though, of the singer-songwriter has never really gone away. The 80s saw the likes of Suzanne Vega and Tracy Chapman achieve both artistic credibility and bounteous record sales, and people will always be receptive to the vulnerable and earnest person wielding a guitar, or sitting at a piano, pouring out angst, anger or regret.
Many of my most rewarding musical experiences of recent times have been in discovering the work of the great  singer-songwriters of the past;the likes of Fred Neil, David Ackles and Jackson C Frank. The work of such artists remains piquant and stimulating, and is well worth checking out.
Whatever the caprices of musical favour, the singer-songwriter, in whatever form he or she takes, will never disappear.

Posted by Glenn at 17:50 No comments: Links to this post