In June 2012 I wrote a blog post about Robert Falcon Scott....Scott Of The Antarctic

Just recently I read Ranulph Fiennes' book about Scott, which addresses the explorer's legacy, considers the criticism from Scott's detractors, examining in detail the circumstances and outcome of his two expeditions to the Antarctic.

The book doesn't simply set out to redress the balance for its own sake, but to lucidly appraise Scott's exploits, taking account of the conventions and attitudes of the times in which they took place, and of course drawing on the author's own extensive experience of polar exploration and endurance.The informative and compact preamble is also valuable by way of setting historical context.

The enquiries are admirably dispassionate and unsentimental, dealing in facts, science and reason, and eschewing fabrication and spurious and skewed interpretation. Misconceptions are corrected utilizing hard evidence. Some reservations which the author considers valid are not obscured, but Fiennes courageously and eloquently takes to task some of the more dubious vilification which Scott has received in recent decades.

The chapters documenting the Terra Nova mission in particular are extremely absorbing and detailed, but the sections dealing with Scott's legacy and modern-day reputation are the most cogent and enlightening. The author dissects some of the "debunking" efforts of recent times.  Strident but measured, and a worthy addition to the library on this topic....

The Spy Who Came In From The Cold - John le Carre

One of the few types of modern-ish fiction which truly excites my enthusiasm is the spy thriller.  One of the high water-marks of the genre is "The Spy Who Came In From The Cold", by John le Carre.

Several factors combine to make this a special and memorable read.  The brilliantly conceived and thought-out plot, and the fact that it occasionally eschews standard spy thriller territory, are among these. I had seen the superb film adaptation, starring Richard Burton, before reading the novel. Whether this in itself was an advantage as regards my appreciation and enjoyment of the book, I am not entirely certain....

Here is a link to my brief blog post about the film.....The Spy Who Came In From The Cold (movie)

Certainly, some of the visuals from the movie were imprinted in the forefront of my mind as a I worked my way through the novel, added to some images which my imagination brought forth independently!  In book form, the at times brutal and unscrupulous nature of Cold War espionage came across just as, if not more, acutely.  The prominence given to the Berlin Wall in the story enhances the sense of foreboding and menace.

I think somebody approaching the book first would find it easier to grasp the narrative, and untangle the intrigue.  The descriptive text leaves fewer things "implied" than in celluloid format, and more tasty morsels are left on the table, inviting the reader to discern where things may ultimately be leading. The various themes and sub-texts are developed with some subtlety, and the whole premise of Alec Leamas's mission, and the elaborate plan which accompanied it, gradually become clearer.  The Leamas character itself is given real depth, and pathos, even allowing for the facade which he is instructed to construct by his superiors.

Just as a much as the monochrome of the movie, the prose here amply evokes the grim, cheerless and uneasy atmosphere which we are constantly told was pervasive in the late 50s and early 60s.  Another thing which struck me when reading this novel was the detachment of the masses from those who were nominally assigned to protect them, and from those with lofty if naive ideals.  This is alluded to several times in the text.

I find it difficult to imagine that in its field, "The Spy Who Came In From The Cold" has been surpassed since it was published.  A masterly piece of story-telling.

Email ThisBlogThis!Share to TwitterShare to FacebookShare to Pinterest
Labels: books, espionage, john le carre, literature, novels, reading, spies, the spy who came in from the cold

I have something of an aversion to much modern fiction, but in recent times I have become acquainted with some works which are widely regarded as "classics", going back as far as the eighteenth and nineteenth centuries, including those written by, among others, Johann Wolfgang von Goethe, and Alexandre Dumas.

The latter's The Count of Monte Cristo found its way on to my Kindle, but only recently did I have the inclination to tackle it.  I am glad that I did...

The first thing to say about The Count of Monte Cristo is that it is quite complex, and very long!  The former quality possibly makes it less than ideally suited to the Kindle format, as it might be necessary to regularly refer back to an earlier chapter to clarify a detail or two. This is more easily accomplished with one of those antiquated paper books in one's hand!

It is rather easy, whilst reading this book, to become a little over-awed and confused by the sheer amount of detail which one feels obliged to absorb and consign to the near-memory, but any such misgivings will turn out to be unfounded, because the story unravels in such a way that everything makes sense.

In a nutshell, the story centres on a young man from the south of France, who is wrongfully imprisoned, suffering from a conspiracy of sorts.  After dramatically escaping captivity, he decides to make good on his vows to exact revenge on those antagonists who engineered his misfortune.

The period in which the novel is set spans from the tail-end of the Napoleonic wars to some years later. Much of it takes in the intrigues involving several families who are central to the Parisian social scene, often on opposite sides of the feverish political fence of the times.

Part of the fascination of the book for me was its depiction of a particular period in history, one during which Europe was in a state of flux, where the foundations of the established order were being disturbed by the challenge posed by new ideas and forces.  The juxtaposition of high society with the seamier side of life is also quite affecting.

The way in which various characters and strands of the overall story unerringly converge on this social milieu may strike some people as a little implausible or far-fatched, but the increasingly rapid pace and air of suspense eventually render such concerns lightweight. I found myself trying to work out precisely how this was all going to end, and thought I had solved the riddle, but even when the answers emerged, they were still very dramatic, and not entirely anticipated.

It is tempting I guess to regard The Count of Monte Cristo as an allegory on "good versus evil", or the notion of "divine justice", but I think that would be an over-simplification.  For me, questions were posed which related to the issue of whether such things as revenge or retribution can ever occur in isolation, or in a vacuum,or be proportionate. Towards the end of the tale even the central character undergoes moments of self-doubt and remorse, realizing the distress which some of his actions have caused, and not just to those who were complicit in his unjust incarceration.

A long and demanding read then, but definitely one to be recommended....

Just a few words about a book which I have recently finished reading... 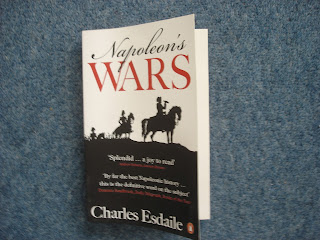 Many books about the Napoleonic Wars cover the familiar ground, with an often narrow, stereotyped view of the geopolitical and ideological aspects, and endless recounting of the famous battles.  Napoleon's Wars is slightly different, in that it devotes substantial attention and space to less obvious episodes and sub-plots.

The author dispels myths and challenges well-worn assumptions about some of the events of that epoch, particularly relating to supposed "popular uprisings" and the issue of Britain's financial assistance to some of the other combatant nations.

Also, this book focuses on less publicized areas of conflict in the Napoleonic era, such as parts of the Mediterranean and The Balkans.  Not only does this add extra interest and variety, but these episodes were in many ways microcosms of the dynamics and trends which were characteristic of the struggle as a whole.

It is also heartening to note that this book is largely devoid of much of the mythologizing about Napoleon which is all too evident in many histories and biographies.  Whilst recognizing Bonaparte's qualities as a military commander, and his charisma and appeal to the French people, it also takes him to task for his intransigence and delusions at various junctures.  Repeatedly, we see highlighted opportunities for Napoleon to have consolidated gains, and secured strategic advantage, which were then ignored or squandered due to the emperor's excessive ambition.

Some of the rhetoric and idealism emanating from Napoleon, often harking back to the French Revolution, sounds more and more hollow and fanciful as the story progresses. Whilst he did indeed espouse and uphold some genuinely noble principles, the overall conclusion which I harboured at the end of the book was decidedly ambiguous.

Not that other rulers and statesmen emerge from the tale with much credit.  The British establishment of the early 19th century comes across as very reactionary, even allowing for its disquiet about the French military threat. The helplessness and impotence of Austria and Prussia for much of the time is also palpable. Much of the narrative concerns itself with the scheming and agonizing of Tsar Alexander I, a fascinating and complex figure.

This book may not be a conventionally comprehensive and "definitive" chronicle of the Napoleonic Wars, but it is both challenging and evocative.  Well worth a read.
Posted by Glenn at 15:13 No comments: