A while ago, I much enjoyed reading Trevor Royle's book about the Wars Of The Roses. His work about the political upheavals which engulfed England, Scotland and Ireland in the seventeenth century is equally absorbing and rewarding. One of the strengths of Civil War is the way in which it brings together events in England, Scotland and Ireland, giving it scale and authority. 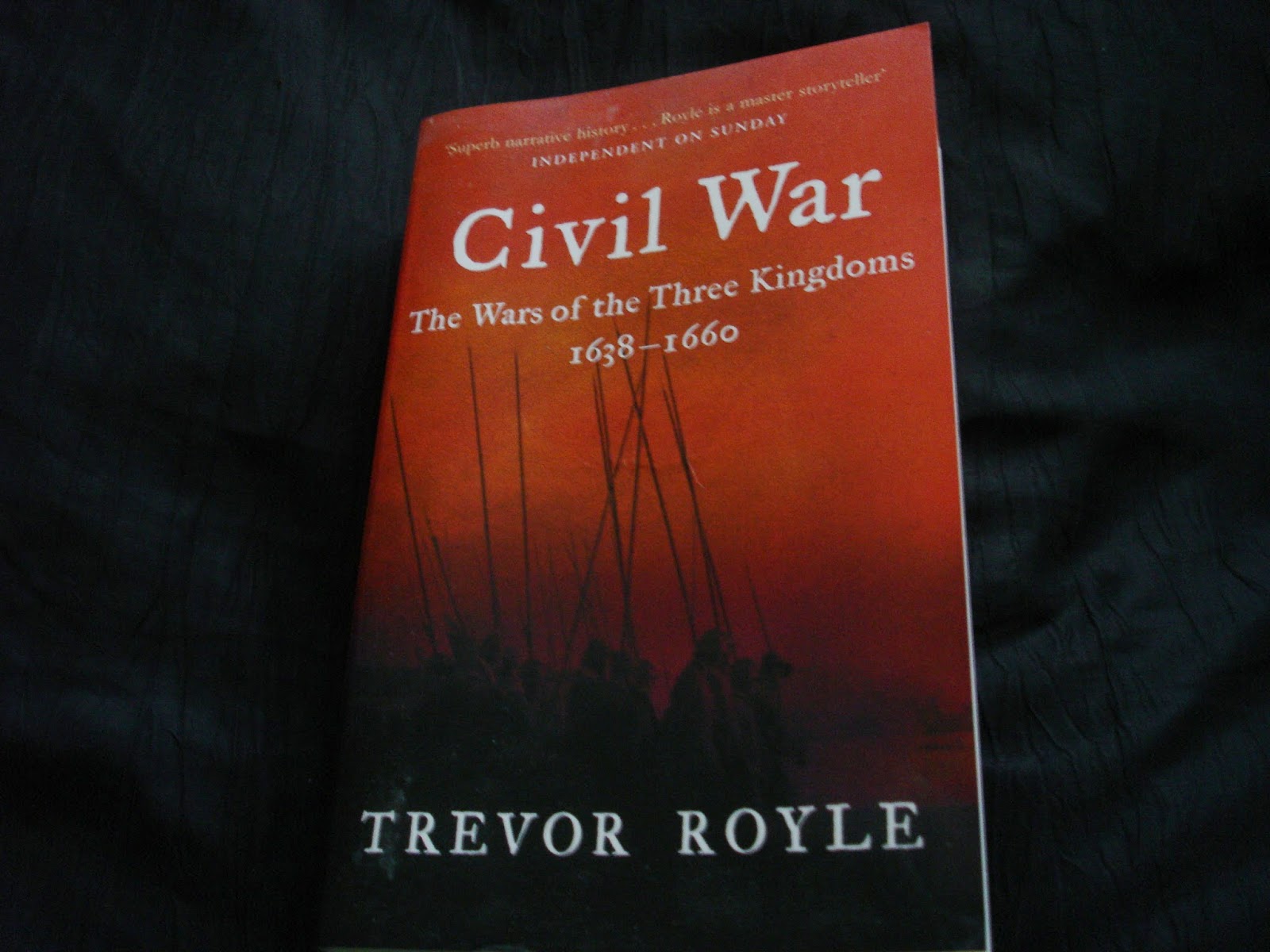 The religious intricacies leave me somewhat bewildered, but a rudimentary grasp of them is necessary to a full understanding of what occurred during those times. It is easy to make facile remarks about religion and politics; in those days, religion was inextricably inter-linked with politics, even if sometimes it was employed as a "Trojan horse" for the furtherance of other demands.
There is an illuminating, but brief exploration of the background to the conflict, and the formative years of Charles I. Did the peculiar nature of Charles' upbringing, conditioned to some degree by events in England and Scotland, have a bearing on the development of his character and the manner in which he conducted affairs later?
One aspect of the Civil War period which intrigues me greatly is the emergence, or not as the case may be, of the self-made man, of a more meritocratic order. Some of the senior figures on the Parliamentary side still relied on rarefied social connections to get into positions where they could influence events, but once there many of them made appointments on the basis of ability rather than birth. This applied to the New Model Army in particular. This new breed of man carried, in varying concentrations, idealism, fervour and commercial nous, and this proved a formidable combination both then and in later years.

Did a genuine revolution really take place, or was this just like many other "revolutions", in the sense that the population was simply exchanging one set of masters or overlords for another?  Was there any great change in the distribution of economic power and concentration of land ownership, for example?
The more radical elements, inside and outside of Parliament, were marginalised , and their ideas and demands disregarded. Also, the conservatives capitalised on the widespread desire for peace, tranquillity and order, and the attendant mistrust of grandiose and idealistic designs. People fell back on safety and certainties, which also often conveniently matched their own self-interest. Plus ca change....
Reading this book, it is noticeable how relatively infrequently "ordinary people" are mentioned, with the exception of the situation in Ireland. Power politics were being contested by competing factions of the ruling elites, and it is worth asking how much the masses benefited much in a material way, from an economic standpoint, from the upheavals and chaos. How much more "democratic" and just did England become?

Oliver Cromwell's rise to prominence is detailed, naturally, and it is worth remembering that he was not at the centre of events right from the start of the struggle. He ascended due to his own qualities, connections and tactical astuteness, and he also took advantage of favourable circumstances and the misfortunes and misdeeds of others.

As the picture unfolded, it occurred to me that Charles and the Royalists missed their opportunity, sometimes through military ineptitude, but more often because of vacillation and hesitancy, playing safe. At some stage, the initiative passed to Parliament as its key personnel began to assert themselves, and they displayed a greater sense of purpose and conviction. Parliament's times of adversity forced them to reappraise their organisation and methods. The Royalists seemed complacent by comparison.
Charles I showed intransigence, and an inability to recognise and appreciate the way in which the winds were blowing. In the early stages of the conflict it may even have been possible for some kind of compromise settlement to be effected. By the time that he made any meaningful concessions, however, he was doing so from a position of weakness, and the mood among his opponents was too militant, confident and single-minded for common ground to be reached. It still rankles to hear how often the king invoked the "divine right" and his supposed privileges and prerogative. That era was being cast away.

The author does appear to imply his unease about some of the methods employed by the Commonwealth and the Protectorate, and he also seeks to put into perspective some of the stereotypes which have built up over the centuries, notably the notion of the war as a class struggle and the portrayal of the Puritans as joyless and excessively austere. Another key point which emerges is that some key liberalizing and democratizing reforms were put on the back-burner for a century or more. The country had been more or less placed on the "right road".  The road would be a long and slow one, but at least it would be a comparatively peaceful and stable one.
The atrocities committed during the war(s) are mentioned here, of course, although the author cautions the reader to take account of the exaggerations and propagandist efforts which embellished many of the stories of excesses and abuses. He also highlights the occasions when chivalry was exhibited by the combatants.

Some of the most enlightening and revealing sections of this book deal with the constantly shifting sands of allegiance in Scotland and Ireland, the unrest within the Parliamentary army, the struggles between moderate and radical opinion, and the various revolts and mutinies which erupted across the territories.

I first read this book three or four years ago, and this time around I was much more interested in the political and social dimensions than in the niceties of military tactics. I see this as a good sign. The emergence of the Levellers and the Diggers I found especially intriguing, with their calls for more egalitarian laws on land ownership, and an emphasis on "natural rights". Were they the original left-libertarians?  My own views have been moving in a similar direction in recent times, and their idealism and courage inspire. They were way ahead of their time, and I am keen to learn more about them.
I found this book extremely enjoyable, informative and well-balanced. Stylishly written, with plenty of quotations from memoirs and literature of the time. Highly recommended.
Posted by Glenn at 11:54 No comments: Links to this post

Perhaps "Please Please Me", released by The Beatles in 1963, is not the greatest debut album in rock history, but it is an endearing work which merits close inspection, even if it is difficult to be totally dispassionate when assessing it, because of the "Beatles" factor.
One of the most well-known things about the record is that most of the tracks were recorded in one day. A mixture of Lennon-McCartney originals and cover versions, it has a touching and infectious naivete. Even so, it is daunting to think that less than five years later these same musicians were writing and recording "Strawberry Fields Forever", "Penny Lane" and "A Day In The Life".
The running order is adroitly arranged to spread out the stronger performances, and it expertly conceals the weaker material. "I Saw Her Standing There" and "Twist And Shout" serve as formidable bookends, and help to make the record seem better than it actually is. I sometimes think to myself that the Beatles must have been playing better songs in the clubs than a few of those which ended up appearing on the album. Was the inclusion of some "safer" fare a sign of the band's eagerness, and that of their manager, to reach as wide and mainstream an audience as possible?

The material may be less interesting than that found, for instance, on the group's sophomore effort, but there is a real unity and cohesion here, doubtless stemming from the compressed nature of the recording session(s), and therefore having more to do with overall energy and atmosphere than musical styles as such.  In some ways the strength of the individual numbers is less important than the overall effect. It is even arguable that when this LP was put together, Lennon and McCartney had not yet got fully into their stride as songwriters, separately or in terms of collaborative efforts. They only became truly prolific, in terms of quantity as well as quality, a little while later.

The opening track, "I Saw Her Standing There", still retains all of its freshness, joyousness and exuberance over fifty years after its appearance. It encapsulates that almost intangible magic which lifted The Beatles well above the nondescript, and fulfils this role much more potently than most of their later, supposedly more "mature" output. The main ingredients are the raw but likeable vocals of McCartney and Lennon, the semi-suggestive lyrics, and Ringo Starr's idiosyncratic drum fills. As a whole the song feels like a statement of intent, although probably not intended as such at the time.

In amongst the relative filler, there are some gems. The title track possesses many of the qualities of "I Saw Her Standing There", with the once again the contrasting voices of Lennon and McCartney blending to considerable effect.

Of course, "Twist and Shout" forms a rousing climax to the set, with John Lennon's searing vocal a consequence of the rigours of the legendary one-day recording session. The other members of the band perform admirably, in the knowledge that Lennon's voice might not have been able to withstand the strain of another take had any mistakes been committed.

"There's A Place" is often cited as a prototype of the more "grown up", confessional song writing which would become much in vogue in later years, but I think that its importance in this regard has been inflated, probably because this is The Beatles we are dealing with, and not some other group which disappeared into obscurity. Other artists were also beginning to dabble with the introspective around that time, anyway.

This record feels like a group effort, although George Harrison's contribution is perhaps more subdued, and less prominent, than the others. The competitive spirit, which might always have been there, did not emerge until the band had really broken big. Did the need to make that initial breakthrough breed solidarity and humility in the ranks, or at least ensure that those things were suppressed?

So in all honesty not one of the truly great debut albums, but immensely enjoyable on its own terms and as a period piece.

Posted by Glenn at 11:55 No comments: Links to this post