The movie Rosa Luxemburg, released in 1986, and directed by Margarethe von Trotta, is a biopic (of sorts) of the German-Polish revolutionary and activist. Barbara Sukowa plays the title role.

I say a biopic of sorts, because the movie does not cover the whole of her life, although there are a few flashback sequences, referring back to her childhood.

For much of this picture, there is a dark atmosphere of foreboding and oppression, often with a backdrop of snow and overcast skies. I personally found this to be galvanizing rather than discouraging. Some of the most powerful and effective imagery is of Rosa trudging around prison yards in the snow, accompanied by her poetic reflections and commentary.

In addition to the above, a good deal of the running time consists of Luxemburg arguing (often at the dinner table) with her "comrades" regarding strategy, tactics and theory. If some of the settings here are an accurate reflection, then it seems that Luxemburg and her friends and associates lived in a good deal of comfort and luxury, when they were not locked up in prison, that is.

I like this film, partly because it deals with European history and politics, and partly because it is imbued with the notions of learning, ideas and books. The period sets, costumes, decor and so forth, are impressively, if soberly and unobtrusively, done. The scene which depicted a "turn of the century" ball was nicely effected and presented - this is an area where many similar pictures fall down.

The theme for much of the movie, as I interpreted it, was that the subject was principled but headstrong, and often despaired of her older, more pragmatic and conservative colleagues, and their more measured approach. There is almost as much focus on her emotional and romantic entanglements as on the political arena, partly because such areas may illustrate some of the personality traits which helped to determine her destiny and her fate.

I was intrigued by her advocacy of mass action, rather then relying totally on the drudgery of party politics and parliamentary procedure and compromise. She kept receiving promises from her party leaders, but one suspects that they were empty promises, designed to placate her temporarily, though there is merit in the argument that a hasty or ill-prepared "revolution" might be self-defeating.

She was wrong, initially at least, to claim that there would be no mass support for the war which commenced in 1914, but was ultimately proved correct in many of her observations about the effects which the war would have. I thought that the film dealt with this stage of Luxemburg's life quite honestly and deftly, illustrating her despair,resignation and disillusionment at the nationalist fervour which helped to propel Europe towards war, and eloquently summing up her views on how developments in the conflict could slowly turn the tide of opinion.

The chronology might confuse a few people in places, but the main thing is the overall effect. This is not a blandly hagiographic account, but at the same time it does have the effect of making one think beyond the smokescreens and bland over-simplifications which tend to dominate (in my experience) mainstream 21st century discourse and comment.

Barbara Sukowa's performance is admirable. Many movies of this type are marred by cartoonish or over-inflated portrayals of the main players, but here Sukowa delivers a reasonably plausible and convincing picture.

A good movie, not excessively preachy or partisan.  It is visually pleasing, soundly acted and adroitly presented.


Posted by Glenn at 22:09 No comments: Links to this post

When I was very young, there were certain television programmes which retained a mystique, usually because I was never, or rarely, permitted to watch such programmes by my parents!  One of these shows was The Sweeney, the highly influential and acclaimed Seventies crime-drama series.

As I grew older, I was led to understood that The Sweeney had been "ground-breaking" and "gritty", but I had been unable to judge this for myself.  When the series was first broadcast, a combination of factors meant that I was not able to view the show.  The timeslot when it was shown, parental concern over violent content, and our family's mild anti-ITV snobbery were foremost. Whenever any discussion turned to the show, I felt somehow left out.

It was not until the recent past that I was able to watch The Sweeney in any concerted form. It was a revelation to me, although from a 21st century perspective it doesn't seem as innovative or as edgy as it must have done circa 1975/76. And of course some of the attitudes exhibited would not meet the approval of a modern audience. 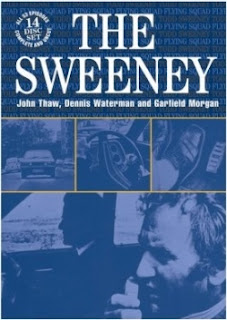 The series gives a very authentic and honest portrayal of the Seventies in London, and by extension of Britain as a whole during that period of time. An atmosphere of decay and gloom, maybe, but also a sense of community and certainty before technological and socio-economic developments began to change things irrevocably.

Regan is an intriguing and ambiguous character, superbly played by John Thaw. A proponent of unorthodox methods, he seems old-school, but in some ways he might be said to be ahead of his time. He is regularly at odds with his superiors, and even with his subordinates. The writing and the acting combine to make the concept and realisation of Regan very believable and credible, not just as some caricature. A man of contradictions, he appears cynical and jaded, but at the same time seems wholly committed to, and immersed in, his job.

Another key, in my eyes, to the success and appeal of The Sweeney is that it does not over-emphasize or excessively utilize some of the "recurring" themes. For example, Regan and his team are not uniformly at loggerheads with The Powers That Be. Sometimes they find common cause. This measured approach adds authenticity, and prevents the series from becoming stale and predictable. 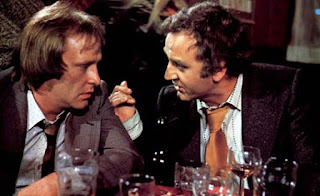 Dennis Waterman has perhaps not been accorded enough praise or credit for his performance as George Carter. I have always found Waterman likeable in whatever role he happens to be playing, and this series finds him in great, assured form.

The character of Carter perhaps represents the police in a state of flux, incorporating clear elements of the "old school", but also receptive to, and embracing, new methods and tools. Carter often questions Regan's excesses and his outlandish schemes, but is sometimes placated by his "guv'nor"'s self-confidence, his persuasive manner and his track record.

The episode "Hit And Run", in which Carter's wife is killed, provides a fine showcase for Waterman's talents, going way beyond the bravado and machismo for which The Sweeney is, rightly or wrongly, renowned.

It is tempting to see parallels between Jack Regan and Inspector Morse, another detective famously portrayed by John Thaw. An older, cynical, grumpy character, with a penchant for the unorthodox, partnered with a younger, ambitious, more "domesticated" sergeant.

The plaudits extended to The Sweeney are well deserved, but this is not to say that every episode is brilliant. Like other similar television series, it suffered from a lack of continuity and consistency, partly because different episodes had different writers and directors. The ambience and tenor of each story could vary greatly from the next one, with difficulties in maintaining "back story".  Some episodes bordered on comedy - "Thin Ice", "Golden Fleece" and "Messenger Of The Gods" spring to mind. Light relief is all well and good, but not to detract from the mood which is essential to the show.

Few punches were pulled in the depiction of an escalation in the ruthlessness and violence displayed by criminals. I can see how this would have been shocking for the people in the Seventies, raised as they were on a diet of shows featuring gentlemanly, even chivalrous villains, and correspondingly placid and reticent cops. Episodes such as "Taste Of Fear" and " Bait" have the capacity to unsettle and disturb, even after all these years. The rawness set new standards.

The impression emerged that the intricacies of detective work and police procedure had been thoroughly researched, and some things are left unexplained, leaving the viewers to work a few things out for themselves. One eventually gets used to the jargon and slang!

A few episodes did over-reach themselves, and look rather silly today.  One example is "Tomorrow Man", in which John Hurt plays a computer whizz-kid. The word is that Thaw and Waterman grew finally to consider that The Sweeney had run its course. Within the remit of the squad, it was inevitable that genuinely fresh ideas for storylines would dry up eventually. That said, I don't feel that the show went particularly stale or moribund. It ended on a suitably bitter and abrasive note in "Jack or Knave", with Regan feeling highly aggrieved after being investigated for alleged corruption.

Watching The Sweeney is still a rewarding and satisfying experience, sometimes thought-provoking. Dated in some respects, yes, but still quality television.

Posted by Glenn at 23:28 No comments: Links to this post