It is a curious thing that people in Britain know comparatively little about famous, or infamous, episodes in our history. The Crimean War is a case in point. Most of us are familiar with the stories about Florence Nightingale or the Charge of the Light Brigade, but ask the man in the street to give even a basic explanation of the geo-political background, or the strategic "reasoning" behind the conflict, and one is likely to be confronted with a blank expression.

Throughout my own childhood, the war was a constant subject of media references, and even of conversation amongst elderly relatives, seeming to conjure up a certain mystique and mythology. In order to remedy some of the gaps in my own knowledge and understanding, I recently did some reading, part of this process being Alexis Troubetzkoy's book on the subject (part of the "A Brief History Of.." series....) 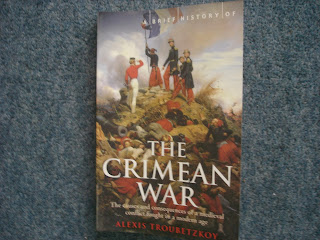 In the book, the scene is set against the backdrop of the Tsar's visit to England in 1844, which proceeded most amicably, although the seeds of later conflict were buried beneath the surface of the diplomatic exchanges which took place.

Reading about this period provides an important, and disconcerting, reminder of how deferential and reactionary a place Britain still was in the mid 19th century, and how many callous attitudes still prevailed. Different times, yes, but no more edifying for all that.

The time between the end of the Napoleonic Wars and the Crimean War often appears to me like a "twilight zone" in British history. It must have seemed to many like a period of tranquility and peace, but instability remained, and new grievances and designs were being nurtured.  The sources of potential were many and diffuse.

Troubetzkoy's book to me underlined the importance of Europe's years of revolution and upheaval (1830, 1848), and equally how incomplete and unevenly distributed the genuine change was. Some of the structures and movements which supplanted and succeeded the "ancien regime" were, looking back, hardly beacons of enlightenment. In some cases it was considered that the only way to consolidate power and prestige was to be strident and belligerent, and to curry favour with regressive elements.

Upon closer inspection, it becomes clear that the reasons for the outbreak of war, and the way in which it was ultimately conducted, are more complex than is popularly considered to be the case.  The role of religious privileges in Turkey, for example, although the extent to which this was employed as a smokescreen for the exercising of imperial pride and grandeur, and commercial interests, is open to debate.

The central role of Napoleon III is also clear, possibly determined by his need to assert and consolidate his domestic position. It seems like Britain was forced into a diplomatic corner by France and Russia, forced to choose between alliances and wars.  They may have sought to contain the Turkish difficulties, but the alternative would have been a Europe-wide conflagration.

As with so many major events around this time, one appreciates the leverage and power of independent and ambitious diplomats, with their own agendas, awkward to control in the era of rudimentary and primitive communications. Colourful characters they may have been, but their influence was often malign.

Many aspects of this war remain obscure to the general reader, such as the fact that Britain was gradually relegated to a junior role in the "coalition" as the fighting progressed, and the level of distrust between the military commanders, and between the military men and the politicians. The campaign seems to have been largely improvised, and been characterized by compromise, muddle, vacillation and misunderstanding. The Allies "won", but this could have been achieved at much less cost for all concerned. The war did lead to some calls for reform in various areas, but this was to be a long and slow process.

Learning about history is often cited as a means of ensuring that we humans learn from our past mistakes. I would also offer the thought that it can help us to appreciate that, for all our gripes and misgivings, the world has progressed in at least some respects.....