By 1977/78, Jackson Browne had established a well-deserved reputation as one of the standard-bearers for the singer-songwriter movement. His first three albums had virtually formed the template for this sub-genre. His 1976 release The Pretender had introduced additional musical diversity, as well as a broadening of the lyrical subject matter. The next record, Running On Empty,also embraced some of these trends, whilst maintaining many of the elements which characterized Browne's "golden" period, but against a fresh backdrop. 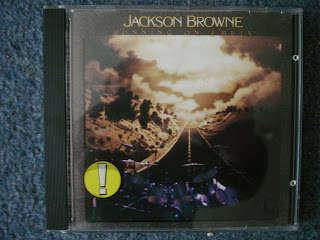 The album features tracks recorded in a number of environments, from the concert stage, to the soundcheck, to the hotel room, to the tour bus. There are even cover versions and songs co-written by Jackson with other people, another departure from the usual Browne formula.

It can almost be said that Running On Empty is a concept album, as quite a few of the numbers deal with the pressures, strains and delights of life for the touring musician. This is ideally matched by the rawness and spontaneity, which in turn is partly a reflection of the circumstances under which the recordings were made. The tenor of the songs also evokes the atmosphere of the times, one which is captured by the vague air of resignation and apathy.  The shallow hedonism of the rock lifestyle as a metaphor for the disillusionment of a generation?  None of the ten songs here contains much in the way of overt "social commentary", with the exception of the title track, but in its own way this collection eloquently conveys emptiness,disaffection and even retreat.

It has been claimed that some of the songs here are lightweight, trite even, and it is difficult to dispute that taken in isolation they lack the incisiveness and gravitas which people had become used to. However, the whole is greater than the sum of its parts, and the balance largely achieves the effect which the artist was seemingly aiming at.

Some backbone is provided by two tracks in particular, "The Road" and "Shaky Town". The former has a haunting melody, accentuated by David Lindley's violin. The lyrics depict a vivid flavour of the road life, and are delivered with the requisite amount of laconic and careworn cynicism. "Shaky Town" possesses a similarly bluesy, ponderous flavour which aptly complements the words.

The instrumentation and sound on Running On Empty are somewhat unlike that on the previous records, but primarily it is pleasingly sparse, economical and intimate. I hesitate to use the word "craftsmanship", but this is not over-laboured, being counter-balanced by the immediacy of much of the material.  For Browne devotees there are the comforting tones of David Lindley's lap-steel playing, both exuberant and delicate.

It would probably be inaccurate to say that this album was a major turning point in Jackson Browne's career;that would not occur until the early 1980s. However, it is one of the most intriguing projects which he has undertaken. Although we have hinted that the songs may not be as instantly memorable and profound as some of his introspective classics, the record has hidden depths and is relatively "undemanding" emotionally. An enjoyable and novel excursion....