Many biographies provide the reader with a detailed and colourful factual account of the life and times of the subject, but comparatively few manage to identify the person's traits and innermost motivations with great acuity. These things are achieved in great measure by Ian Kershaw in the first part of his two-volume work on Adolf Hitler. (A condensed one-volume version is also available).

I have read several books about the dictator and the Third Reich, but this first volume combines a chronological, if not exhaustive, account of this period of Hitler's life with coherent analysis of what made him tick, and how his character and beliefs developed, and perhaps most crucially how such a calamity came to befall a country such as Germany, with dire repercussions for the world as a whole. 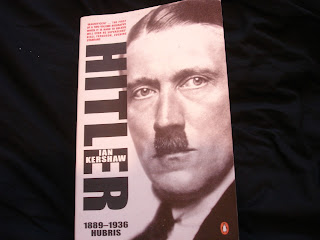 One of the most impressive things about Kershaw's work is that it goes out of its way to separate fact from reality, and to challenge many lazy assumptions and cliches which have gained currency over the decades. This applies especially to analysis of Hitler's childhood, family background and early adulthood. It would be very tempting to cite aspects of his formative years, and ascribe to them a significance which is flimsy at best. In reality, Hitler had a relatively mundane childhood, no more or less eventful than the average person, then as now, and any objective and honest view would find it hard to discern any signs which pointed the way to the dramas ahead.

Surprisingly little is given over to the period up until the end of the First World War, but I did not feel short-changed by this. The author fits in what were the salient experiences and turning points. There is a cogent and plausible reading of the possible roots, sources and origins of Hitler's antisemitism and other prejudices, and of Hitler's own portrayal of these processes.

As with his childhood, the early years of Hitler's adult life were thoroughly unremarkable. His life did not differ greatly from others of his background.  The author observes that Hitler was changed and "made" by his experiences at the end of the Great War, and by the atmosphere of ferment in Germany which accompanied those experiences.

Hitler is not portrayed here as an all-masterful figure, always in control of his destiny, and of people and events, but as someone for whom the cards often fell, and whose fate was often decided by accident, in spite of rather than because of his own actions. The way in which Kershaw explains and documents this phenomenon is one of the great strengths of his scholarship.

This book also challenges the frequently espoused view that Hitler was dominant in his own sphere and milieu at all times. Kershaw rightly stresses the complexity of the "volkisch" and nationalist scene in the 1920s, and the fact that the Nazi leader was often obliged to defer to other influential figures.

The account of the period during which Hitler was incarcerated in Landsberg is superbly detailed and enlightening, revealing a helpless and uncertain figure, unable to have much impact on the interminable factional manoeuvrings within his movement. It's a bit too easy to view of all of this as pre-determined strategic shrewdness on the NSDAP leader's part. The fragmentation and discord played into Hitler's hands in the 1923-24 period.  The weakness of the party at that stage, rather than its strength, favoured Hitler.

There is also some excellent analysis of the effect on the party of the relatively tranquil and stable mid-to-late-twenties, and how it reorganized itself, eventually being well positioned to capitalize on the seismic upheavals which curtailed that tranquility and stability. Kershaw goes down some avenues not usually explored in Hitler biographies, such as the divisions caused by cultural differences between activists in different parts of Germany (north and south).

We are also presented with a realistic assessment of the chaotic and fluid allegiances which were prevalent in German politics, and society as a whole, in the early 1930s. Kershaw is quick to pick apart generalizations about who did or didn't support the Nazis, paying particular attention to the attitudes of the business community.

One of the fascinations for the me about this period is the tension within the NSDAP about economic matters, with Hitler anxious to project a moderate image, to the chagrin of the more revolutionary and socialistic elements in the party. It is interesting to note how many tycoons and industrialists were initially deterred from lending their support because of the perceived "red" tinge. One would have thought the the "corporatist" aspects of the Nazi programme might have attracted some of the big corporations and concerns, but for a long time it was the smaller operators who were more amenable. Interesting when we think about how "fascism" has traditionally been defined.

The import of the 1932 Presidential election is also emphasized. Though technically a defeat for Hitler, it also gave him a wider platform and stage, and enhanced credibility and legitimacy in the eyes of the populace, making him less of a marginal or "cult" personality.

The passages which deal with Hitler's accession to power are, it goes without saying, among the most disturbing and perplexing. Widespread fear of Communism, and the fixation with erasing the structures of the Weimar Republic in favour of an old-style authoritarian regime, undoubtedly aided Hitler.  These factors, fused with a complacent assumption that he was innocuous or malleable, ensured that what resistance there was to a Hitler chancellorship slowly but surely melted away.

Although giving prominence to the naivete and irresponsibility displayed by the German "bourgeois" political establishment in its dealings with Hitler, the author also shows how Hitler managed to downplay the more unsavoury elements of his movement at strategic points.  But even allowing for this, it seems reasonable to state that any percipient observer should have been able to discern the true agenda and world-view of the National Socialists; there was ample evidence of illegality and barbarism. The suspicion that many of the key players were aware of these things, and proceeded anyway, makes the episode all the more unsettling. Hitler and his colleagues had committed many errors, but were saved by the all-pervasive atmosphere and misery and desperation in 1932/33, and by the inclinations of the power-hungry, the jealous, the deluded and the misinformed.

There is some attempt to cite constitutional alternatives to what transpired on 30 January 1933.  Hitler had reached something of a plateau in popularity, and the movement may even have begun to disintegrate in a short while. The competing groups and parties backed themselves into a corner, however.

To be honest, I found the parts of the book dealing with the period after January 1933 more fresh, interesting and revealing. They outline deftly how once he was installed in the "hot seat", Hitler's appeals to the vanity and self-interest of various sectors - the Army, big business and so on - helped to consolidate his position. Not unqualified support, but sufficient to placate them, and to persuade them that there was no more desirable option available.  Many were therefore onside and cocooned when the real onslaught commenced. By then, it was too late. They had been co-opted, and were more or less subservient to the regime.

We also see that many of the initiatives and programmes for which the Nazis received credit were already in the pipeline, or in draft or prototype form before Hitler assumed power. The author does acknowledge that Hitler's presence in many cases acted as a catalyst and facilitator, galvanizing the bureaucracy.

In this portion of the book, Kershaw also expertly describes how Hitler had to strike a balance in those early months, when he was still vulnerable;again, belying the assumption that he always held unchallenged and impregnable power and control. Hitler had to adopt a pragmatic and circumspect course on occasion, whilst always being aware of the propaganda value of actions, and quick to seize "low-risk" opportunities.  The author does not shirk from pointing out times when Hitler exhibited some savvy, good timing or canny judgement, for example on foreign affairs and disarmament issues.

There is a lean and stark account of the Summer of 1934, when Hitler's position was rendered secure, if not unassailable. It is clearly and unfussily explained how the SA had turned from an asset in opposition into a major liability in power. In appeasing the concerns of the Army, Hitler also succeeded in blinding them to how they would be manipulated and appropriated by the regime. It is hard to over-estimate how crucial those weeks and months in '34 were.

In the final chapter of this first volume, entitled "Working towards the Fuhrer", brilliantly illuminates how the machinery of government operated in the early years of the Third Reich. Kershaw manages to disentangle and simplify some of the confusing overlaps in responsibility;for example the evolution of the Gestapo and the SS.

The period of 1935/36 seems a pertinent dividing point between the two volumes of the story because, as the author points out, prior to the Rhineland operation, storm clouds were gathering, particularly on the economic front. Rhineland not only negated and obscured these difficulties, but it also made Hitler increasingly headstrong, and ushered in a time when foreign affairs assumed some primacy in the Fuhrer's list of priorities

This first volume is disturbing, chilling but magnificent, sufficient to prompt any rational person to focus all his or her attention on how we can do our utmost to prevent such a nightmare occurring again. The sort of book which can prompt people to become much less apathetic and blase about the world, and adopt a new perspective about ominous trends in our own times.

Thoughts on the second volume to follow in due course....