This book had been gathering dust on my shelves for many months, but I felt a strange reluctance to give it my full attention.  This may have something to do with the ambivalent and even uncomfortable feelings which for many, myself included, surround the 44-day Brian Clough reign at Leeds. 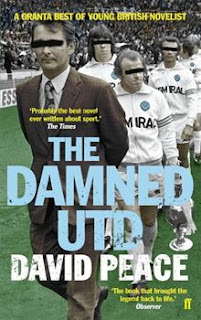 The first thing which will strike many readers is the colourful language, which does not relent throughout. Indeed, once one becomes accustomed to the expletives, they somehow become an indispensable feature of the book, without which it is difficult to imagine the tale having quite the same impact. At the same time, the sheer incidence of the industrial language tempers its shock value, but not necessarily its "value" to the fabric of the story....

As much as its concentration on the Brian Clough/Leeds saga, this book is also a window on the gritty and often bleak ambience of the times in which it is set.  The stark, almost minimalist tone and and style of prose serves to accentuate this. The Britain of the late 60s and early 70s, is made to feel quite sinister and dark, a place where the sun rarely shone, and menacing clouds were never far away.  I was a very small child in the early to mid 1970s, and any meaningful recollections on my part are therefore impossible, but the depiction of the Leeds (my home city) of that time pretty much tallies with other accounts which I have read and heard. Almost a dystopian vision, but not quite!

The format of The Damned Utd is novel, and by and large quite effective.  The relating of the "forty four days" is alternated with the Clough managerial chronicles up until his appointment at Leeds. Although very occasionally confusing (that may just be my own feeble attention span!), this method of telling the story helps to place the drama at Leeds in some kind of context, underscoring what Leeds were letting themselves in for, but also highlighting some of the essential differences between the environments which he had previously worked in, and that which he would be confronted with when he turned up at Elland Road.

I was heartened, but not totally surprised, to note that the Clough story, up until late 1974 at least, was presented in a complex, multi-faceted light, moving beyond the stereotyped and cliched media image of him at the time. Insecurities, regrets, and relationships are all explored, as well as the curious, shifting and evolving nature of his attitude towards Don Revie and Leeds United.

As well as this being a thoroughly engrossing read, I also learned some things about the tumultous events of 1974 at Leeds.  There is possibly a tendency for some Leeds followers to expunge some episodes from this period from their minds, or airbrush them from history. It was good to get a rounded account of those days, even by a less than fully orthodox route.  The feelings which come through are despair, dread and mistrust, and the grubby, cut-throat, dark heart of football, even back then.

From what I have gathered, opinion is mixed about how some of the protagonists are portrayed in The Damned United, but whilst making allowances for this, it is a compulsively gripping and raw documenting and interpretation of those times, both within football, and in a broader social sense.

I found it a less than comfortable read at times, but felt unable to put it down....