Of the albums released by Neil Young during his golden period of the late 60s and 70s, Harvest is perhaps one of those whose reputation has diminished slightly with the passage of time.  Its huge commercial success, and that of the single "Heart of Gold", seemingly prompted the singer-songwriter himself to explore new and more edgy territory in the ensuing years.  I suspect that many people's introduction to the music of Neil Young comes via Harvest.  It is a satisfying but relatively undemanding initiation.

Over my many years of listening to Harvest, I had gradually persuaded myself that it was a curious mish-mash, comprising country-rock, singer-songwriter angst aplenty, and a couple of orchestral-backed numbers.  Authentic Young classics cheek-by-jowl with some decidedly enigmatic fare, it increasingly seemed to me....

Just recently, and for the first time in a while, I listened to the album in its entirety, and it once again began to make sense, as a credible entity.

A few of the country-orientated songs, including the title track, are relatively prosaic, if undeniably pleasing to the ear. Whether it was the musical sterility, the lack of adventure lyrically, or the constraints imposed by fame and success,  which led Neil to visit new pastures, is not totally unclear; possibly a combination of all those factors. At any rate, the momentous fruits of this detour would justify it, both for the artist and the listener.

As has been said, Harvest is often the first album encountered by the Neil Young neophyte.  And it may be that many of those people imagine that the whole of the Canadian's catalogue is similarly "nice".  Little do they know what things lurk in that canon.  You either recoil in shock, or embrace his extraordinary body of work.  To my eternal joy, I did the latter! 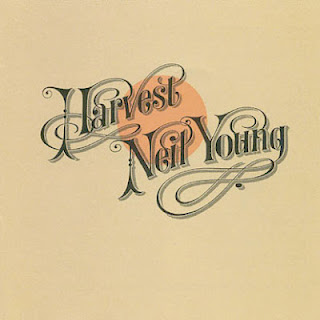 For all of Harvest's image as a laid-back and mellow work, there are some genuinely affecting songs. "The Needle And The Damage Done" is harrowing and chilling, and the rendering here is quite mesmeric. "Heart of Gold", for all its familiarity and over-exposure, is a superbly crafted and warm song.  More focused than most of the songs on this album, and not without its pleasing touches melodically.  "Alabama" appeared to take up where "Southern Man" had left off.

The opening track, "Out On The Weekend", sets the tone, with its almost supine rhythm, accentuated by a harmonica part, and some lugubrious words.  The almost soporific tone is evident in other areas of the album, both the piano work and the pedal steel contributing to this.

Perhaps the most contentious aspect of the track listing was the decision to include "A Man Needs A Maid" and "There's A World".  My experience is that the more one listens to the album, the less out-of-place and grating these songs feel. They certainly help to provide some relief from the relentless diet of country-rock material. Theories as to why these tracks were included:

1. Intentionally, to inject some variety.
2. They helped to alleviate a shortage of songs (unlikely, with the prolific Neil)
3.  Just Neil Young being Neil Young!

In some ways the most interesting track on Harvest is "Words (Between Lines of Age)", which contains elements of both the artist's previous work, and what was to come in the later 1970s.  Whether this is symbolic of a lack of direction at that time is open to debate.

Some have criticised Harvest for its alleged musical conservatism, following some already prevalent trends in North American rock. Yes, it has its weaknesses, and yes it may pale against the more "substantial" material which the great man was to create in the years which immediately followed, but by the standards of most people this is a very fine album indeed.