Some time ago I wrote a short blog post about the 2009 movie The Damned United. I recently watched the film again, and thought that I would put together a slightly more substantial and considered assessment.

The film chronicles the ill-fated forty-four day tenure of Brian Clough as manager of Leeds United football club in 1974, and is adapted from David Peace's book. 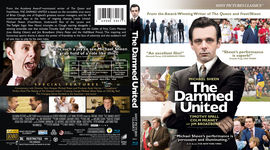 Michael Sheen delivers a superb performance in the Brian Clough role, although some may contend that the depiction of Clough's well known character traits and mannerisms is slightly exaggerated and lacking in nuance. However, as the film progresses the portrayal does become more rounded, showing frailties and insecurities.

The "aesthetic" of the picture to me brings across some of the gritty authenticity of English football, and indeed England in general, during the late 1960s and early 1970s. Images of terraced houses and so forth evoke feelings of "dark Satanic mills". There is not much sunshine and levity, but much honest toil and plain-speaking.  I find some modern films to be bland and clinical in their visual backcloth, but this doesn't fall into the trap as much as most.

A large portion of the movie is given over to "flashback" sequences which chronicle the relationship, and the animosity, between Clough and the long-time Leeds manager Don Revie. The football action sequences are deeply unconvincing, the actors being too old and not athletic enough, although these scenes do succeed in creating atmosphere and context for the overall story. The producers sensibly employed archive footage to help document the tale.

When I first viewed the film, I did not fully appreciate or take in the excellence of Timothy Spall's performance as Clough's assistant Peter Taylor.  In this depiction, Taylor was often the voice of reason and common sense amidst Clough's excesses and flights of fancy.  Assertive, pugnacious, but less egotistical.

Whether the characterization of Taylor presented here is an accurate representation of the true picture is another matter, but it makes for good drama, and occasionally even good comedy. The movie also acknowledges and emphasizes Taylor's input and contribution to the partnership - his eye for a player, his practicality, his contacts and his all-round knowledge of the game.

I won't ramble on about any technical or historical inaccuracies which spring up, because they always occur in films of this nature. Anyway, they are kept to a tolerable minimum, as far as I could ascertain.

As a supporter of Leeds United, I will try not to be overly paranoid concerning the film's portrayal of the club and of Don Revie. Overall, I would say there is relatively little to complain about on this score, and after all, some of the characteristics and tendencies which are highlighted are ones which we relish and glory in...

Michael Sheen has been lauded for his portrayal of Brian Clough's public persona, but for me the most impressive aspect of his performance was how he conveyed the sense of doom and helplessness, as the forty-four days unfolded, and as his position at Leeds gradually unraveled. Lonely, isolated and vulnerable, and missing the wise counsel and comradeship of Peter Taylor.

So, still a film very much worthy of  a watch, and praise also for the use of "Flight Of The Rat" by Deep Purple!
Posted by Glenn at 13:10