Recently, I have started re-watching episodes of the great British sitcom "Only Fools and Horses", and thought I would put together some articles on noteworthy or important episodes.

For the uninitiated, "Only Fools And Horses" followed the lives, loves, fortunes and misfortunes of the Trotter family from London. They eke out a living by market-trading and assorted black-market activities, engaging in various "schemes" which they hope will make them into millionaires.  The two main characters are Derek "Del Boy" Trotter (played by David Jason) and his younger brother Rodney (Nicholas Lyndhurst).

Starting from the beginning, let's take a look at the very first episode of the first series, entitled "Big Brother"..... 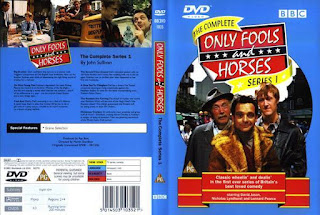 The first thing which I noticed was the state of the characters. Del Boy in particular is nowhere near as rounded and subtle an entity in these early days as he would later become.  Del even displays signs of "sophistication", and there is not always the requisite dose of bathos to balance things out. Traits which would become familiar are under-cooked and undeveloped. There were rough edges to smooth over before the character found its comforting, natural and pleasing equilibrium. The same applies to the character of Trigger. The path to the "polished" characterizations would be uneven.

It is perhaps unsurprising that these early episodes were erratic in quality and atmosphere, as any ambitious brand new concept has to be given time to find its feet and evolve. Even the talents of David Jason and Nicholas Lyndhurst don't always transcend the issues.

The tone in these early days was darker and grittier than the later seasons, and the humour was not as homely. As others have observed, some of the dialogue, and its delivery, seemed forced at times, at odds with the seamlessness, freshness and naturalness which would later become one of the hallmarks of "Only Fools and Horses".

Although the plot of this opening episode ostensibly concerns a batch of "dodgy" briefcases, it is really a vehicle for introducing us to some of the elements of the "situation" in the sitcom, and to the relationship between Del and Rodney in particular. Bits of exposition and back-story are liberally sprinkled amongst the narrative.

"Big Brother" invokes one of the strands which permeates the show through all its incarnations - Rodney's yearning to escape from the shadow of Del, to achieve more independence, in this case by running away. However, Rodney usually ends up returning to "the fold".  By the same token, Del, although on the surface confident and self-reliant, is somehow incomplete and lacking in zest without his brother as his sidekick. Expediency and brotherly love both have a bearing on this.

The "Grandad" character, so beautifully played by Lennard Pearce, hits the ground running, fully formed, more than the other participants, partly because of the nature of the actor's performance, and partly because the Grandad persona was less complicated and intricate.

Making some allowances, this is still quite a weak and unsatisfying episode, not as watchable even as some of the other episodes in the first season, which betray more of the OFAH charm and depth. This is "Only Fools and Horses" in raw, incipient, prototype form.

You would have been hard pressed in 1981 to envisage it achieving classic and culturally iconic status in the UK. It must have seemed like something which might be confined to a cult following or a niche. "Big Brother" is still worth seeing, for curiosity value, and as a measure of just how far John Sullivan and his creation traveled in the years which followed.