This book had been residing on my shelves for some time, but I had never read it properly, feeling that in some ways it outwardly appeared a little on the flimsy side. I am now more than happy to retract any such verdicts. 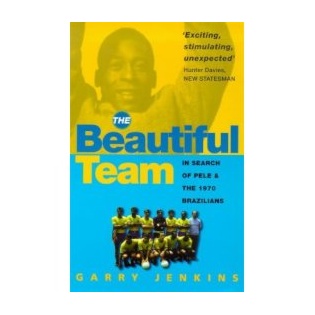 The Beautiful Team is essentially an examination of the celebrated Brazil team which triumphed so memorably in the 1970 World Cup in Mexico. As part of his project, author Garry Jenkins was able to interview most of the members of that famous footballing outfit, and also to take in the legacy and historical and cultural context of its achievements.

For some little time I have nurtured a feeling that the team of 1970 was a bit overrated, and increasingly became irritated at the "lazy", even corny, eulogies spouted by even seasoned and knowledgeable football pundits. However, this enjoyable effort has helped to partially negate some of those sentiments.

Although I think that the 1974 World Cup, and even the 1982 edition, were superior by many footballing parameters, my appreciation of the 1970 vintage Brazilians has been enriched and buttressed by learning some more about what made that team tick, and what made its collective heart beat.

There is much insight into the behind-the-scenes side of things, such as the meticulous preparation, the evolution of the team's tactical approach, and the personal dynamics within the squad. It is interesting to note, for example, the prominence of Gerson, both as a guiding influence on the pitch and as a prime mover in the cohesion of the ensemble overall.

Anyone wishing to learn a little something about Brazilian domestic football in the period prior to the Mexico tournament will also be rewarded. The cultural and social importance of the game is amply and capably illustrated.

It is worth mentioning that this work was first published in the late 1990s, so some of the observations and assertions about "modern football", and the game in Brazil itself  might not now hold as much currency or credibility, but still an intriguing read.
Posted by Glenn at 13:29