Fever Pitch the movie is a 1997 fictionalized adaptation of Nick Hornby's acclaimed autobiographical novel, with the screenplay courtesy of Hornby himself.

I first saw the film a few years ago now, and thought that it was alright, if nothing special. Recently I subjected it to another watch, to see whether my perceptions of it might have shifted at all.

The movie centres on the character Paul (played by Colin Firth), and his obsession with football, and more specifically his beloved Arsenal. His consuming passion does not always sit easily with his personal relationships and his interactions with the "real world". This is all set against the backdrop of Arsenal's challenge for the 1988-89 League championship title. 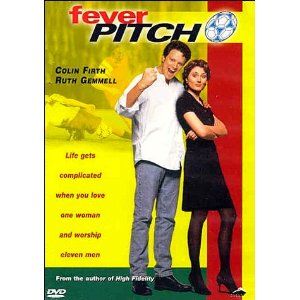 I haven't read Hornby's book, a serious oversight I admit, but at least this didn't mean that I was constantly comparing film to book, invidious though such comparisons would have been anyway.

For me the best thing about the picture is the performance of Colin Firth as Paul. I've generally not been a major fan of his, but here he is immensely likeable and endearing as an "everyman" figure, genial but, like all of us, flawed.

Paul's new girlfriend Sarah (played by Ruth Gemmell) might initially seem like something of a stereotype, but the character injects the "tension" which is essential to making the whole thing work. I am perhaps not qualified to comment on the performance of the actress, as I haven't known many people like her character! Holly Aird, who I have always been a fan of, provides some good moments as Sarah's friend Jo.

This movie is now a bit of a time capsule, largely set as it is at a time when football was still seen by many as an undesirable, murky sub-culture. The post-Italia 90 broadening of the game's appeal, and its attendant new-found respectability, make some of the dialogue seem quaint, and I'm not sure whether this would have worked as well if it was set in the 21st century football/cultural environment.

Like so many modern films, it is well-produced and comfortable in that bland fashion. The dialogue is relatively subtle, though, even oblique, and the "philosophizing" is well-pitched and quite credible, doubtless due to the involvement of Nick Hornby.  So many similar works overdo the "meaning of life" angle, but here it is done sparingly and adroitly.

There are some retro/flashback sequences, mostly set in the late 1960s and early 1970s, which help us to trace and comprehend the origins of Paul's obsession. These are quite sweet, and Luke Aikman does a good, convincing job as the young Paul, as does Neil Pearson as Paul's father.

I guess that the main themes of the film are those of "growing up", and the extent to which we need balance in our lives between the practical and the more "irrational" pursuits. Do we need both in order to be truly happy, content and fulfilled?  However much we kid ourselves, some of our impulses can never be truly suppressed. They endure, and perhaps what matters is how we manage them.

"Fever Pitch" does have very faint echoes of the romantic comedies which were so prevalent during the 1990s, but the vacuity and schmaltz are thankfully absent.  In its understated way, it is more like an art film, although elements of the ending border on the corny.

Not a masterpiece by any means, but entertaining and heart-warming.