Few, if any, artists can have created a run of albums of the consistent quality achieved by Can during the early Seventies. Perhaps the most striking and influential of those records was "Tago Mago", released in 1971 as a double album. I have seen it described by one or two critics as one of the greatest albums ever recorded, and to my ears this is no exaggeration of its merits.

Funnily enough, I did not really "get" the music of Can until comparatively recently.  They seem to be one of those acts whose charms take a while to impress themselves on the listener. Once my defences were breached, however, I found it impossible not to immerse myself in their work, especially that run of records from the period 1971 to 1973. The type of material which jolts one out of any musical inertia and complacency which may have amassed. 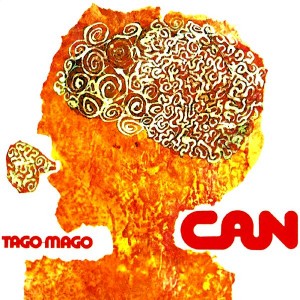 The astonishing thing about "Tago Mago" is that in 2015 it still sounds so fresh, pristine and "contemporary". Some of the music of that era which also falls under the umbrella of "experimental" has not aged anywhere as gracefully. This album, on the other hand, has an immediacy and a punch which are enduringly compulsive and enthralling, distinct in this respect even from the other ground-breaking music which was emerging from Germany at the same time.

Despite being categorized by many as avant-garde, the outward format of the Can group was very much that of a conventional rock group.  Vocalist, guitarist, bass player, keyboardist, drummer. The most immediately noticeable elements of their work, on this series of albums at least, are Jaki Liebezeit's astoundingly energetic drumming and the vocals of Damo Suzuki, who made his Can debut here. However, this should not make us overlook the contribution of the other instrumentalists, who were all integral elements in constituting the intoxicating Can sound during their best years.

Like so many great pieces of art, the draw and appeal of Can's best music is very difficult to encapsulate and convey in words. At their best, however, they were both rhythmic and blissfully melodic, often exhibiting these traits simultaneously. The terms "avant-garde" and "experimental" can serve to frighten off some people, but Can's music is ultimately as welcoming and comforting as any mainstream pop. Just cast off your blinkers and preconceptions at the door....

On such a uniformly strong record it is difficult to pick out highlights, but the track "Halleluhwah" is a particularly gripping and impressive creation, clocking in at over eighteen minutes, and for many representing the apogee of their journey. Liebezeit sounds like he has grown an extra set of limbs, the rhythm and tone are slightly more aggressive than elsewhere on the set, and the sheer length of the piece gives scope for diversions and more time for a mood and a groove to assert themselves. As elsewhere on "Tago Mago" the keyboards are not generally as prominent as one might imagine, but they are essential in engendering that peculiar ambience. This applies, if not as much, to the guitar work.

Having waxed lyrical about "Halleluhwah", it is fair to point out that the other numbers are almost all strong and interesting in their own right. Aside from "Halleluhwah", the other two more lengthy and "unconventional" pieces are "Aumgn" and "Peking O", the latter featuring some striking sound effects and vocal treatments. One gets the feeling that these two tracks more accurately embody the group's musical heritage than the more compact material. Can had the consummate knack of making such extended pieces seem accessible and benign, however.

Of the shorter items, the opener "Paperhouse" has a laid-back but insistent groove to begin with, before branching out, and it is something of a guitar showcase for Michael Karoli. It is followed by "Mushroom", which feels to me more austere and "minimalist".  One can easily see how this track and its character might have rubbed off on many musicians who emerged later.

"Oh Yeah" is an absolute delight and and an adventure, from the opening "explosion" sound effect, to the propulsive beat, to what sound like backwards vocals. As so often with Can, the rhythm is soothing rather than grating, and the keyboards and guitar both accentuate this flavour and lay textures of their own.

The closing song "Bring Me Coffee or Tea", at its outset at least, displays the mellower side of Can, and is an ideal way to bring us down to earth. There is even what sounds like acoustic guitar in there. More great drumming, if more delicate and understated.

I have not compared Can or their music to other artists, quite simply because there is nothing who they can safely be compared to, certainly among their contemporaries. It is unlikely that you will be open-mouthed with astonishment when first hearing them. More likely, you will eventually, after careful attention, find yourself muttering something like "my word, these guys were good".....