Another of the books which I have recently revisited after a gap of a few years is "The Habsburgs - Embodying Empire", by Andrew Wheatcroft, first published in 1995.

As the author is keen to stress, he adopts an approach of looking at the Habsburgs in the context of the dynastic entity, rather than simply as a series of individuals. Also, he examines the ways in which the self-image of the family evolved, and how this was conveyed via art, architecture, the printed word, ceremony and so forth. The methods by which the Habsburgs projected and perpetuated the "myth". The mystical and romantic elements of these impulses are explored, too. 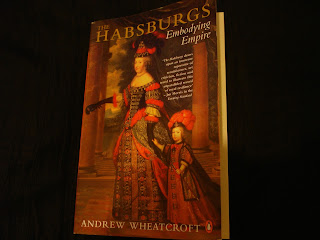 It is also one of the curious aspects of the story that the Habsburgs attained their influence and reach as much by strategic marriages and accumulation of wealth than via warfare. They themselves were often relatively impecunious, and their financial strength was precarious, sometimes depending on inheritance via marriage.

One of the things which readers might find surprising is how much this study concentrates on the Spanish branch of the Habsburg dynasty. To many, the family is most commonly associated with the German-speaking parts of Europe, bur in fact the focus on Spain is quite illuminating in painting the full picture accurately and vividly.

This is not really the definitive story of the dynasty, nor does it set out to be. Some of the most notable figures, such as Maximilian, Charles V and Philip II, are accorded what might be described as mini-biographies. These portraits are quite gripping, detailing the traits of these rulers, and how they themselves interpreted and propelled the Habsburg mystique.

Wheatcroft does not exhaustively chronicle each diplomatic initiative and military campaign, but instead he tends to concentrate on some phases which he feels are particularly instructive. Some episodes which are considered pivotal in European history are therefore given less attention than one might normally expect. This does not lessen the book's appeal;in fact, in many ways, it enhances it.

The seemingly endless references to the Habsburgs' religious piety and divine guidance may give the impression of an archaic age, but they are essential to an understanding of how the dynasty perceived itself, and what drove it on.

My impression was that relatively little was mentioned about the attitudes of the Habsburgs' millions of subjects, more specifically about the impact, or lack of it, of their rule on economic and social conditions. It seemed that untold resources were expended on opulent palaces, churches, and castles. What about education, healthcare, infrastructure, economic development?  The fact that they are rarely mentioned may tell its own story.  Then again, the remit of the book does not demand that such subjects predominate.

There is some protracted analysis of the various difficulties which afflicted the Habsburg succession, and how the furtherance of the line was engineered and secured. The author scores highly in his examination of the tension which sometimes sprang up between the generations, and how each new ruler put his or her own stamp on the office, whilst adhering to tradition and ethos. We also acquire a sense of how the geographical and strategic orientation of the empire continued to shift over the centuries.

The last one hundred years or so of the empire are documented in a condensed, but lively and readable way. The implication I think is that, faced with revolutions and new political and social forces, the Habsburgs adapted as much by changing administrative methods and presentational styles as by changing fundamental policies and beliefs. The effects on the family of the Enlightenment, and the upheavals which came after it, appear to have been uneven.

This book did not necessarily make me more sympathetic to Habsburg values and practices. However, it did deepen my understanding of why they thought and acted in the way they did. It is a thoughtful and easily digestible exploration of the phenomenon.