My journey through the works of Hermann Hesse continues apace, and next on the list was Narcissus and Goldmund, which in many ways has been the most affecting and thought-provoking for me. 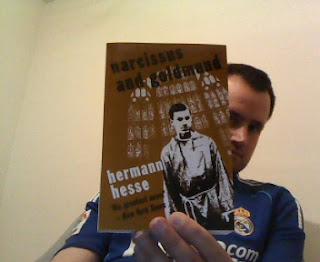 The work tells the story of two young males who attended a monastery.  Narcissus quickly rises to become a quasi-tutor, and the young Goldmund becomes, in effect, a protege of his. Once Goldmund experiences the pleasures of the flesh, he doubts whether it his vocation to be a monk, and the astute and perceptive Narcissus helps his younger friend to achieve an awakening.  Goldmund consequently takes his leave of the monastery.

The novel, as with other Hesse books, explores the Dionysian/Apollonian dynamic of "the thinker versus the artist" or "intellect against nature", but here ample attention is also paid to the idea of travelling "back to mother", of rediscovering the innocent and dreamlike path first embarked on during childhood.  Goldmund, with the assistance of Narcissus, comes to recognise his mother's qualities and influence, and that these had been distorted and misrepresented by his father, hence the steering of the youthful Goldmund in a monastic direction.

After his awakening, and his departure from the monastery, Goldmund sets out on a journey through the countryside, relishing the favours of women and savouring and feasting on other things to which the senses respond.  As this stage of the story unfolds, we are made aware that the "maternal" dimension of existence, although more varied, colourful, vibrant and intense, is also less secure, certain, logical and predictable.

Much of the imagery employed to convey this idea of the "mother" ideal, and also of Goldmund's delving into the torment of "the artist" is projected through the females who he encounters on his travels.  Female wiles, and in one sequence the act of childbirth, are used to illustrate the extremes of pleasure and anguish which, it seems, are revealed by similar physical manifestations.

As Goldmund moves from place to place, he finds that people are not exclusively welcoming to his wayward and itinerant lifestyle, as they are attached to a sense of roots and attachments. This makes him aware of the transient nature of things, and partly explains his urge to apply his artistic urges to create works of art which will be other than ephemeral.  Brushes with death, and witnessing the ravages of the plague, intensified these thoughts.

I interpreted this part of the tale, rightly or wrongly, as another "awakening" on Goldmund's part. He sought more of a goal, and sense of purpose, a focus for his endeavours. The subjects of his artistic efforts also yield much symbolism, with a compulsion to create figures depicting the Madonna and Narcissus. This may have indicated a growing realisation that he was beginning to combine the sensual and the practical.

Goldmund is eventually reunited with Narcissus, and both before and after this event further insight dawns on him.  My take on this was that he began to appreciate that life is a constant cycle of suffering and pain, alleviated by pleasure.  This pleasure or joy soon ebbs, and the agony returns. The cycle can be transcended by tangible realization of thoughts, images and dreams, combining elements of the "artist" and the "thinker".  Narcissus opines that in reaching this state, Goldmund has truly found himself.

After returning to the monastery with Narcissus to partake in further artistic work. Goldmund becomes restless again, after the completion of a project diminishes his sense of purpose. There follows a potent conclusion to the story. Goldmund seeks again to satiate his wanderlust, but finds that his charms are no longer as seductive, and his senses not as aroused.  Stricken by illness, and bereft of the drive to apply his thoughts and dreams artistically, Goldmund lacks the will to survive and exist which previously drove him on.  The conflict is at an end. He is ready to return to Mother....

During the final chapter, we discover that the outcome of Goldmund's meandering journey has prompted Narcissus to question his own approach to life.

Narcissus and Goldmund I found quite inspiring.  Another message which I took from it was that all our lives are a constant battle for peace and contentment, but factors, often stemming from childhood, cause us to approach this struggle in different ways.  However, we all constantly require re-balancing, re-nourishment and replenishment.  Being true to ourselves at the outset of the journey may be the most natural, honest and effective way to find some meaning....