Not so long ago I completed reading Fahrenheit 451, by Ray Bradbury, and posted my thoughts on this blog:

Suitably enthused, I then moved on to another of Bradbury's most noteworthy works, The Martian Chronicles: 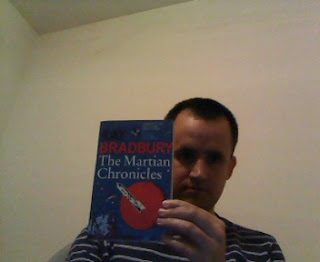 The Martian Chronicles is a fictional account of Earth's repeated attempts to colonize Mars, presented as a series of short strories, and examines the effects and ramifications of these events over a number of years.

Many themes are explored throughout this book, often pertaining to the dichotomy between Man's idealism surrounding his journey to Mars, and the intolerance, corruption and arrogance which he also brings with him.

Another message which comes through is that the inhabitants of Earth could learn from the civilizations on other planets, and that they ignore such lessons at their peril. Some human weaknesses could be our downfall in exploring space, including greed, sentimentality and hubris.

In The Martian Chronicles, people have widely differing agendas when approaching colonization of Mars.  Some see Mars as a potential refuge for lovers of liberty, tolerance and peace, while others wish to fashion the Red Planet for their own less benign and selfless motives.

The work looks at the methods employed by the Martians to address the influx of Earth men, from the subtleties of "telepathy" to less benevolent measures as the depredations intensify.  Some uncomfortable and probing questions are posed about what lengths a people should go to in defending their own "territory" and habitat.

Some of the philosophical strands in this book really resonated with me, particularly the desire of some of the Mars colonists to live a simple existence, for its own sake, and not to be in hock to some "end" or spurious "common good".  But at the same time, the question lingers, how far should we be permitted to go in order to secure and preserve our own liberty and richness of life?

Possibly the most fascinating chapters of The Martian Chronicles appear towards its conclusion, when issues of racial persecution, war and human relationships are very prominent. Those who suffer racial discrimination on Earth travel to Mars with hope, but may end up facing the same types of oppressors on their new home.

Many of those who boarded the rockets espoused some ideals about freedom, but acted just as unethically and immorally, and with as much avarice, on Mars as they had done on Earth.  There is an attendant danger that the colonized area becomes as authoritarian and over-regulated as the mother planet. Peaceful co-existence was desired, but on terms set by the former Earth dwellers....

When a major war erupted on Earth, many of the colonists return from whence they came. For all their determination to construct a new life, the pull of historic ties, tribalism and vested interests proves stronger, and they are drawn back to support something which they profess to abhor.

After the exodus back to war-ravaged Earth, the few people left on Mars try desperately to establish contact with each other, but in this context the journey proves more seductive than the cold reality upon arrival. The craving for human interaction proves to be delusive, with the inference that we are best left to reach our own equilibrium, and form relationships "organically". This struck a chord with me, I must admit!

The final chapter is more hopeful, with a group of humans finally severing all ties with Earth, and looking towards the future.

The Martian Chronicles was at times a demanding read, as there is comparatively little in the way of exposition, and intense concentration may be needed to get the most out of it, and interpret all of the imagery.  However, if one persists there is plenty at which to wonder, and with which to exercise the mind.