Bright Lights Dark Shadows is a biography of the Swedish pop group Abba, written by Carl Magnus Palm. The edition which I have was published in 2001.

After having browsed through it periodically, I recently worked my way through this book in its entirety. In conclusion, I would say that it is a highly readable, and illuminating effort.

A goodly portion of the book is given over to chronicling the period prior to the emergence of Abba, following the upbringing of the four group members and the development of their musical careers. This approach brought home to me how Abba was no overnight success, and that progress in those formative years was not uniformly smooth. 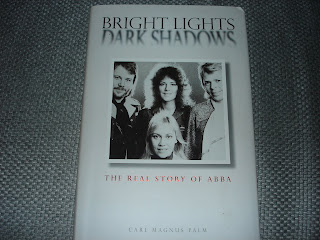 I think the book scores highly in its exploration of how the four people reacted to each milestone or setback in their careers, and how they viewed success and celebrity. The level of detail for me helped to convey how the real story is far more complex than the simplistic version often served up by the mainstream media. This is especially true where the characteristics and personality traits of the musicians are concerned.

Throughout the book there is extensive focus on the business and financial side of Abba's story, and in particular Stig Anderson's role.  We also get a sense of how the music business worked in those pre-internet days, and the struggle which Abba had in receiving "cultural" recognition, most of all in their native land.

From what I can discern the author has delivered a balanced and honest account of the Abba years. The negatives and the problems are analysed, the triumphs are celebrated.  I liked the author's style in discussing the merits of songs and albums, highlighting how the various tracks were born and developed. My own understanding of what made Abba tick artistically was considerably enhanced.

It is clear that, for differing reasons, the members of the group were not that keen on touring for much of the time. The documenting of the 1977 Australian tour, and the attendant hysteria, offers a convincing depiction of how touring was not always conducive to general wellbeing and harmonious personal lives. Indeed, a theme throughout Bright Lights Dark Shadows is how Abba dealt with the various pressures and expectations which encroached once fame and fortune arrived. I am sure it was occasionally fun!

There is some intriguing and thoughtful perspective on the Abba "revival" which commenced around the early 1990s.  The book offers some acute observations on the reasons for the resurgence in interest in Abba, and also some misgivings about certain aspects of the revival.

Overall, I really liked this book. It augmented my knowledge of and appreciation of Abba as artists, and offered a telling reminder that "stars" are also real people, with real feelings and emotions, and that all is not as idyllic, pleasurable or straightforward as the masses might like to imagine.