Timeless Flight Revisited is a highly detailed biography, published around 1997/1998, of one of the most influential of all rock groups. Rogan has written other books about The Byrds, both before and after this one. Much of the material in this one is based on interviews conducted by the author with group members. 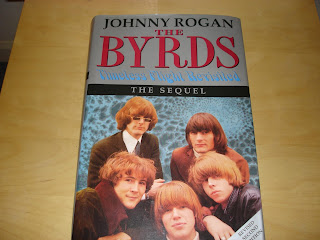 Looking at the chapters which cover the formative stages of the band, it is striking how amateurish those early days were.  Some of the guys had musical experience, but in terms of rock n roll they were virtual beginners. In some respects there was almost a punk ethos about the project at that point.

I feel that the author very occasionally gets slightly carried away in extolling the group's greatness and its position in the grand scheme of things as regards music in the Sixties.  And I say that as a major admirer of the Byrds' music myself.  However, this is counterbalanced by honest and forthright appraisals of the chronic instability which plagued the band, and how this both helped and hindered creativity.  The deficiencies and setbacks are discussed with some directness.

Some of the strongest parts of the book are those which examine the personal and artistic dynamics within the Byrds, and the alliances which formed between individual members and producers, management and so forth. A lot of space is necessarily allocated to documenting how people coped with the mercurial David Crosby!  The book makes a valid point in comparing the creative core of the Californian combo with its equivalents in The Beatles (Lennon and McCartney) and The Rolling Stones (Jagger and Richards).  The tensions and antagonisms within The Byrds frequently generated magic, but sometimes the outcome was less than healthy. Their structure was much more fluid and amorphous.

Each album is reviewed song-by-song, and the author demonstrates a shrewd musical ear in evaluating the merits, or otherwise, of the group's released  (and unreleased) output.  Whilst this book rightly celebrates the achievements of The Byrds, there is also a sense of what might have been, both artistically and commercially. The author shows an adroit feel for the real reasons for this deficit, looking at the (first) departure of Gene Clark as a crucial turning point.  The suggestion that Gene could somehow have been accommodated in a non-touring, "Brian Wilson" role is very intriguing.

Time is taken within the pages to bring out a full picture of the personalities and motivations of the key players in the drama.  I found these areas to be especially illuminating in the cases of Chris Hillman and Roger McGuinn.  Hillman is traditionally painted as "the quiet one", but he was perhaps more assertive and outspoken than is sometimes imagined. As the book progressed I began to feel twinges of frustration at how the egos and agendas within the group could not be subjugated to the cause of making The Byrds more commercially successful and enduringly vibrant as a creative entity.

Commendably the author devotes considerable attention to the years of "decline", from 1969 to 1973, with often withering assessments of the era's mis-steps and absence of inspiration. The squandered opportunities, petty jealousies and wrangles are all part of what makes the Byrds' saga so compelling, I think.

There is ample coverage of Byrds-related activity subsequent to the dissolution of the original band, including the numerous side projects and offshoots, and the reunions and get-togethers of various combinations of personnel.  There are also excellent obituaries of both Gene Clark and Michael Clarke.

Altogether, this is a highly comprehensive account of the group's turbulent story.  A lengthy read, but ultimately rewarding in getting a full portrayal, warts and all, of an important part of rock music history.