Testimony is a memoir by Robbie Robertson, best known as guitarist and songwriter with The Band. It is not a full biography as such, as it only takes the story up to 1976 or thereabouts, but it is an entertaining and enlightening read.

The book chronicles Robertson's upbringing, and his musical apprenticeship, as he cut his teeth playing countless gigs in small venues, soaking up knowledge and expertise along the way. The tales of his time playing with Ronnie Hawkins are especially amusing and occasionally lurid! There is also some intriguing material regarding Robertson's family background and his ongoing links with relatives and his roots. 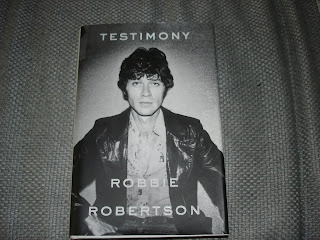 One of the things which strikes me most about Testimony is that it provides the reader with a ringside seat, so to speak, as the musical revolutions of the Sixties progressed, looking over the shoulder of someone who was a part of those upheavals and landmark events.  To me the journey feels real and organic, free of the cliches and platitudes which often characterize portrayals of that era. Above all, the love of music and self-expression permeates everything. The stories are told with genuine relish and enthusiasm.

The author is candid about the ebb and flow of his relationships with other musicians, particularly his band-mates. Also, I was fascinated by the chapters which cover his associations with Bob Dylan, such as for example the turbulent and momentous concert tours of 1965/66 and the recording sessions which gave rise to the so-called "Basement Tapes".

Robertson indulges in quite a bit of name-dropping, telling us how he used to hang out with the likes of Andy Warhol, Marlon Brando and Salvador Dali. This does, though, help to underscore the vibrancy of those times.

As an admirer of The Band's music, one of the most valuable functions of this work for me is the way that it offers some insight into how the group's acclaimed and important early albums took shape. We also gain an idea of what an impact those first two records in particular had on the music world, and on creative people generally.  Above all, that period just sounds like it was enormous fun!

The closing sections of the book are both interesting and poignant, as we learn how the rock n roll lifestyle began to sap the creativity and cohesion of The Band, culminating in their farewell concert (famously documented in Martin Scorsese's film The Last Waltz).

I found this book to be a riveting read.  It is well worth checking out for fans of rock music.