One of the first modern "zombie" horror movies, Night Of The Living Dead, directed by George A. Romero, has proved highly influential, in part because of the public domain status of the original film, and its consequent wide availability.

It seems trite to say this, but the fact that it was in black and white helped to "make" the film, at a time when most movies were being made in colour. This consideration I think applies especially to the opening scenes, including the one in the cemetery. Their monochrome cloak helped set the unsettling and disconcerting tone.

Consciously or otherwise, the black and white harks back to the classic horror films of the past. In more than one sense, Night Of The Living Dead has a foot in both camps, embracing aspects of previous works, but also helping to form new templates for the genre.

As others have observed, that scene in the cemetery, where Barbra and her brother are visiting the grave of their father, is integral to the film's impact. There is little or nothing in the way of exposition or back-story at that stage - we are straight into the fear and terror.

Equally, the opening "titles" sequence, showing the car driving along a lonely road, is hugely affecting, accentuated by the creepy music. This eeriness is maintained throughout the piece. 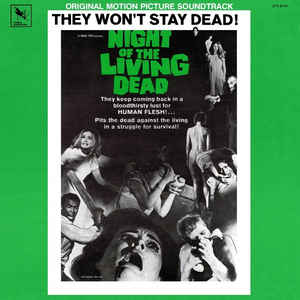 The sparse and underplayed production values and dialogue also assist in building up the "believability" of the scenario and events. Slickness all too often compromises and sanitizes horror movies. The camera angles add to the realism and the sense of anxiety and disorientation.

The violence and "gore" are not as graphic or as gruesome as would become almost standard in later horror pictures, including those directly inspired by this one. More is left to the imagination, and it is more about mood, anticipation, psychology, metaphors and imagery.  I wonder whether modern audiences might be slightly puzzled by the "slow" pace, and the relative lack of "action".

As for the acting, I think that both Judith O'Dea (Barbra) and Duane Jones (Ben) do a pretty good job. O'Dea makes her character's shock and vulnerability palpable. Some might question Barbra's behaviour after witnessing her brother's death, but I felt that a mixture of shock and the self-preservation instinct set in.  Some of the other acting is less convincing, but it is better than some people may associate with this type of film.

Part of the impact of the picture is the concentration of most of the running time in an isolated farmhouse. This way, in addition to the claustrophobia, we get to see the interaction of a group of disparate people, with their differing temperaments and fear thresholds. We see the "unity" of the zombies set against the fractious and individualistic people in the house

It is tempting to read various interpretations into the dialogue and the characterizations, given that this was 1968. Was the gathering in the farmhouse a microcosm of wider society? It is fascinating to observe and analyze the examples of human nature - co-operation, egotism, necessity, pragmatism.

Having been tense and unsettling, the film becomes much more disturbing (and graphic) in its closing stages, and the symbolism (intentional or not) becomes more pronounced.

Night Of The Living Dead is very much worth a watch.
Posted by Glenn at 10:42