If I had to make a shortlist of my favourite sports-related books, then pretty near to the top would be Bodyline Autopsy by David Frith, a beautifully written and carefully researched account of England's acrimonious 1932-33 cricket tour to Australia. 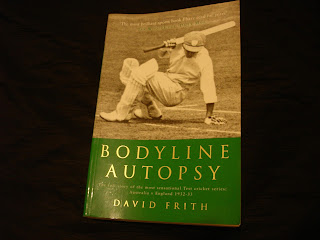 The book was originally published in 2002, and the game of cricket has changed a bit since then, but the erudition and sweep of this work are timeless. The author's love for the game and its history leaps from every page, as does an appreciation of the world beyond cricket.

Thankfully, this book does not overplay the political and social importance of the Bodyline series, but at the same time it stresses the context in which the controversy unfolded. The world was a different place in 1932, and the relationship between England and Australia was different to what it is in the 21st century.

Much of the early going is taken up with an exploration of the similar controversies and debates which preceded the infamous tour, and how the tactics of Douglas Jardine and his bowlers might have evolved. This all helps to place what happened in some kind of perspective.

Quite apart from examining the Bodyline phenomenon, this book gives us a lovely window on the world, and cricket, as they were back then. The haphazard and piecemeal nature of England's selection process for the tour, and the informal and leisurely nature of the tour schedule and the social scene, evoke great nostalgia. There are also some charming anecdotes from England's ship journey Down Under.

This was also a world which was only just beginning to grapple with the notion of mass communication, and it was also a time before attention spans began to ebb away and finesse in all things was gradually dispensed with.

Frith sets out to analyze the drama from all angles, dispelling some myths and misconceptions along the way, drawing attention to anomalies and contradictions in the cliched popular version. The level of thoroughness is admirable. A wide range of sources and evidence are drawn upon to paint a vivid and balanced picture. The use of photographs is very tasteful. They are integrated nicely into the text, and their character augments the scholarly texture.

The accounts of the Test matches are absorbing and well-paced, making the reader feel that he or she was really "there". Naturally, the pivotal Adelaide match is accorded special attention, and there is an exhaustive "forensic" examination of the leak of details of the dressing room exchange between the Australian captain and the England management. The fact that a "leak" such as that was so emotive in the Thirties again illustrates just how much times have changed.

Reading this book again, the thought "what was the big deal" springs to mind, but we have to place these events in the context of those times. Bodyline stood out because it was seen to breach unwritten rules. At the same time, it was not really a historical watershed either; it didn't signify the imminent breakdown of civilization, and normal service was resumed, for a while anyway.

One of the book's strong points is the depth of its analysis of the aftermath of Adelaide, the sentiment harboured in both countries, and the attitudes in the corridors of power. The relating of the diplomatic toing-and froing is rounded and realistic, not exaggerating the gravity of the episode, but emphasizing the role of statesmen and civil servants. The priority of the politicians appears to have been to limit the damage beyond the portals of cricket.  The precariousness of the economic and trade situation is also highlighted (these were Depression years, of course). In retrospect, one wonders what might have happened had fences not been mended successfully, given what was to transpire globally in the late 1930s.

A sizeable proportion of Bodyline Autopsy addresses the fall-out from the tour, including the efforts to conciliate the two cricketing cultures, and the machinations which affected Harold Larwood and Douglas Jardine in particular. Interestingly, there is also some effort to look at how perspectives changed in some minds over time. There is a look at the later lives of many of the key participants, as well as how Bodyline was perceived in later decades.

This is a beautifully written work, endlessly stimulating, meticulously researched and also thought-provoking. A perceptive and authoritative look at a seismic sporting controversy, as well as a revealing glimpse at how things were back then.