Of the records released by Led Zeppelin, perhaps none is more enigmatic than Houses Of The Holy, released in 1973.

The reasons for this status are varied.  This album is sandwiched between the first four, issued in quick succession, and Physical Graffiti, seen by many as their magnum opus. In addition, Houses Of The Holy has a curious flavour to it, containing more "progressive rock" than other Zeppelin efforts, and also a couple of "pastiches" which did not find universal approval. However, closer scrutiny reveals a fine record. 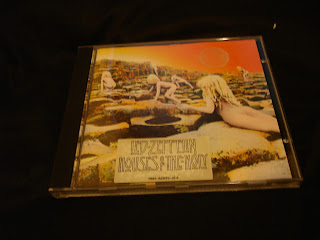 By 1972/73, the "wow" factor induced by the band's early efforts had begun to wear off, and many will see this album as lacking in the raw energy and power of the previous ones. For the reasons touched on above, it is often perceived I think as something of a stop-gap work, but that assessment does not do justice to some of the music within. Included are a few songs which have endured for longer than more "famous" Zeppelin counterparts...

This record has been seen as a departure of sorts for the group, in that it is more layered and less spontaneous than their earlier work, but hints of the direction in which things were moving can perhaps be discerned on the fourth album. Some might opine that they went too far on this one, and that some kind of happy medium or equilibrium, between "classic" bluesy, rootsy Zeppelin and more experimental impulses was only established on Physical Graffiti, with the space permitted by its four sides. That again pleads the case for "Graffiti" being the definitive Led Zep work, as it encompassed all facets of their output.

The new complexity is showcased on the opening number, "The Song Remains The Same", from which the title of the band's later concert movie was derived. Some pleasing tempo shifts hold the interest, and parts of the track have that distinctively hypnotic flavour which characterizes many Zeppelin songs.

"The Rain Song" is one of the group's most atmospheric and affecting tracks, with its elaborate, intertwining guitars, and an understated but expressive vocal by Robert Plant. The production's separation allows the various melodic nuances to be appreciated, and of course John Paul Jones's keyboards are an integral part of the picture.

For reasons which I find difficult to fully elucidate, "Over The Hills And Far Away" has never quite grabbed me or captured my imagination in the way which it has evidently done for countless other people. The folky, acoustic feel is endearing, but somehow it does not fully realize that early potential. As a basic, uncomplicated rocker, "Dancing Days" serves its purpose, with the augmentation of the guitar textures, and a meaty rhythm section constitutes a solid base.

"No Quarter" is another tour-de-force by John Paul Jones. The electric piano (?) sound is quirky but intoxicating, and the Jimmy Page guitar riff instills some real steel. This is the kind of track which demands an attentive listen, as it can easily wash over you. The "treated", eerie vocal from Plant completes the imagery, and is another case of the band's experimental zeal.

As the closing track, the simplicity and basic riffery of "The Ocean" serves partially as light relief, and the thundering clarity of John Bonham's drumming is a joy after the outlandish fare which preceded it. It was almost as if, by signing off with this song, Zeppelin were reminding everybody that they could still rock with the best of them, and the "nostalgic" feel of the coda was also in keeping with these sentiments.

Which leaves the two "genre exercises", which in large part cause the slightly ambivalent attitude which this album has inspired. "The Crunge" sounds OK, the drums, bass and scratchy guitar evoking a "funk" sensation, and it is not quite the "fly in the ointment" which I remembered from my earlier exposure to it. In fact, it is arguably superior to similar excursions by certain other rock bands.

I am less sure about "D'yer Mak'er".  The drums are obtrusive and heavy-handed, and the whole thing kind meanders to no great effect.  Again, my present-day mellower and more tolerant self is more willing to forgive than my more pedantic persona of twenty years ago. These two songs are on reflection not real pastiches, but they are more classifiable as "tributes", although this also leaves them sounding somewhat bland and indeterminate.  They are among the weakest items in the Led Zeppelin canon.

It is not fully accurate to assert that this was the transitional stage in Led Zeppelin's career, as "III" and "IV" exhibited the guys spreading their wings and going off on various tangents. It was just another part of their journey and evolution. It was not as visceral as the first two records, a "thinking man's" Zeppelin in many respects, and well worth a listen.