Much of the public's "understanding" and image of prisoner-of-war camps doubtless stems from watching movies and television dramas, or from sensationalist or one-sided documentaries.. It is always worthwhile to read a first-hand authoritative account, in order to separate myth from reality, and to obtain a grasp of the dynamics prevailing in the camps. A great example of such scholarship is "Colditz:The Full Story" by Major Pat Reid, a British officer who himself escaped from the infamous fortress. 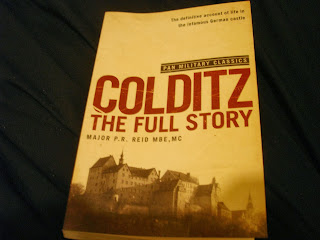 Reid's account draws on his own experiences and those of his fellow POWs, as well as the diaries of key players in the story, and benefits from research conducted in the decades following the war.  Where details or facts are contentious, the author often cites differing versions of events.

One of the first things which I took from this book is how much the truth is at variance with the romantic notions which some people have about Colditz. Down the years, I have heard it intimated that the conditions there were comfortable or benign. However, this account largely discredits such theories, documenting the hardships and travails which the prisoners endured, including food shortages, illness, and endless disruptions and upheavals. Also, the spectre of the Gestapo and the SS, and their brutality, was a constant fear....

Reid provides some enlightening and detailed background information about some of the key protagonists, which not only enriches the reader's appreciation of them as people, but also aids in a grasp of the nature of the times, particularly the troubled Europe of the early 20th century. To his credit, he devotes much attention to the activities and valour of the non-British prisoners, notably the Polish, French and Dutch. The sometimes awkward relations within the national groups are examined frankly.

From reading this history, I gained the impression of a diverse group of men, and while there were some common traits and factors which bonded the prisoners together, many of them were all the while fighting their own private battles of conscience, coping in their individual ways with the privations, the frustrations and the moral dilemmas which arose. Beneath the bravado often lurked some dark forces and thoughts.

An impressive thread which runs through the chronicle of the war years at Colditz is the principled stance taken by so many of the men, presenting a defiance and resolution to the enemy at all times. There was clearly a moral dimension to this, the Allies believing in the justice of their cause, but it no doubt also served as a coping mechanism for many, enabling them to feel as though they were continuing the struggle by another means.

The battle of wills between captors and captives in POW camps is regarded as a microcosm of war itself, although it could be argued that the playing field was more level. It was a contest of intellect, fortitude and moral fibre, and not just brute force, industrial muscle and absence of scruples.

There was also a discernible undercurrent of "give and take" at times in the relationship between the prisoners and the Colditz authorities, both sides tacitly accepting that an agreeable rhythm of life and some semblance of equilibrium had to be maintained. This is often cited as a pervasive phenomenon in penal institutions generally. This is not, though, to imply that a code of chivalry existed between the adversaries...

The dedication and diligence with which the POWs went about their escape activities, and engaged with their enemy, is a reminder of the zeal with which a generation united, put aside minor differences, and fought a virulent threat to freedom and civilization. Would the same happen today, if a malign force comparable to Nazism emerged?  I sometimes find myself wondering whether the world has changed too much, but remain optimistic that ultimately the values of humanity and decency remain much the same as they were back then. Hopefully, my theories will never have to be put to the test.....

Reading this work, it is remarkable how much initiative and autonomy the captives exhibited, partly a consequence of so many officers, serial escapees and robust, energetic characters being thrown together in the same place. The amount of planning, intelligence gathering and ingenuity involved in the escapes and general organization was staggering, combining savvy, patience and obduracy. Persistence and perseverance were also essential, given the likelihood that the bulk of escape attempts would not result in a "home run".

The chapters which deal with the closing months of the war are absorbing and sobering. Chaos reigned in Germany, and the POWs became acutely aware of what might befall them in such a scenario. It is often overlooked just how precarious and uncertain their position was shortly before Colditz was liberated by American forces in 1945.

Reid also underlines the role played by the Red Cross, neutral countries and voluntary organizations in supporting and advising the prisoners, these efforts regularly conducted in perilous circumstances. The people, including resistance movements and ordinary civilians, who rendered assistance, deserve enormous admiration and respect.

My chief emotions after reading "Colditz:The Full Story" were those of being humbled by the courage, finesse,tenacity and stoicism shown by the prisoners. Even in the direst of adverse circumstances, they rarely wavered in their resolve and focus. An example to us all.