Following on from my recent blog post about my attendance at Queen's 1982 show at Elland Road, Leeds,  I thought that I would take a look at the album which they had released shortly before that concert, Hot Space. 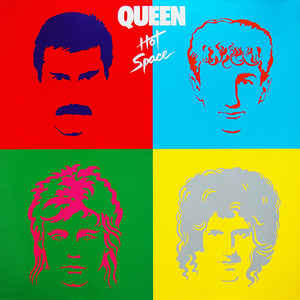 This was Queen's first "proper" studio album for two years, which in those days seemed (to me) like an eternity, but by modern standards this would be no big deal.

I can't really remember whether there were signals in advance of the musical direction which the record would signify, but in the end it turned out to be a mixture of decided funk and dance influences, with some more "traditional" Queen sounds alongside.  In some ways this was a more pronounced and decisive take on the blend which had been represented by 1980's The Game.

This album is sometimes seen as the album which triggered a period of uncertainty and soul-searching for the group. It met with a lukewarm critical (and in some territories, commercial) reception, and these factors may all have contributed to a crisis of confidence, and a lack of direction, which were not fully remedied until Live Aid in 1985.

Looking back now, to me the record stands up reasonably well. The sound, in its breeziness and exuberance, is very much "of its time", but the continuing excursions into more rhythmic styles met with mixed results. I think the inventiveness and stylishness of the production tend to obscure the lack of fresh and potent ideas in the songwriting department.

Of the "dance" orientated pieces, only "Back Chat" really works, not because it is an outstanding composition, but because of the atmospheric production, and the effort which was evidently expended on arriving at the finished article. "Staying Power" worked much better in concert, and "Body Language" remains as puzzling to me now as it was over thirty years ago.

The two Roger Taylor songs, "Action This Day" and "Calling All Girls" are likeable but minor.  "Life Is Real (Song For Lennon), has some intriguing lyrics, but comes across as rather "Queen by numbers".

"Put Out The Fire", a basic rocker, perhaps heralds the beginning of a shift in Brian May's songwriting efforts from the mainly introspective towards a greater emphasis on social commentary. The inclusion of "Under Pressure" almost occurred to me as a rather tired gesture, as it had always seemed to me as a "standalone" single, and putting it as the final track on Hot Space felt like an admission that the creative well was running somewhat dry.

So I would contend that Hot Space is greater than the sum of its individual parts. Although it is by common consent one of the weaker records released by the band, the freshness of its production, and the diversity of the material, make it an interesting listen to this day.
Posted by Glenn at 21:10