Another item in my library of motorsport books is "Working The Wheel", by Martin Brundle and Maurice Hamilton, first published in 2004. This is a series of recollections and analyses of Formula 1 circuits and venues, based on the words of the former Grand Prix driver and Sportscar World Champion. 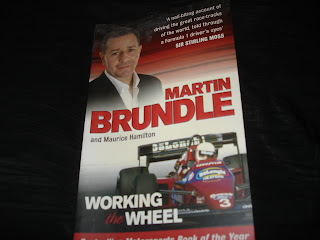 The text I think reflects Brundle's feisty but honest, no-nonsense racing persona. His views on some circuits are intriguing and hardly stereotypical, but his reasoning usually appears sound. He welcomes changes made to some tracks, which in other quarters have been decried.  He prefers a tricky or convoluted section of track to replace a flat-out section which represents little in the way of challenge to the driver, and with dangers ever-present.

A very practical and pragmatic philosophy emerges, although at the same time Martin underlines his respect for the traditions of motor racing and also his sense of history. He, for example, clearly relishes the atmosphere at places such as Monza.

"Working The Wheel" is liberally peppered with anecdotes from Brundle's time as a racing driver, many of these stories related to contentious or murky episodes, and doubtless made easier to recount by the passage of time.  It is fascinating to hear his own personal perspective on some epochal incidents and iconic personalities, and his own, sometimes peripheral role in how things unfolded.

There is lots of "local colour", and vivid memories of the individual flavour and atmosphere of the circuits and their environs. Some might think that a disproportionate amount of space is given over to amusing (and occasionally hair-raising) stories about Brundle's travels to and from circuits, but these add to the entertainment value, and also help to provide an insight into the pressures and the existence.

Some of Martin's observations remind us of his own narrow escapes from disaster, and his hard-luck stories, and also of incidents which have either been forgotten, or did not receive much coverage at the time when they happened. Minor triumphs and tragedies which combine to form a rich tapestry, and a window on the personal battles and "little victories" which constitute such a part of the racer's experience.  I was also delighted that he included chapters about Le Mans, as well as a few "defunct" F1 venues, such as Detroit and Adelaide.

In general, the Formula 1 circus comes across as an intoxicating place, and the enthusiasm of the author(s) shines from every page. That said, this tome does shine a light on the hardships which go along with the glory and the riches. I'm still envious of the lifestyle, though.

"Working The Wheel" is a rattling good read.  Some readers might prefer to scan over the more technical passages detailing braking points, racing lines, gear changes and so forth, but the contents are by and large candid, highly entertaining and in places enlightening.