Life At The Limit is a book written in 1996 by the late Professor Sid Watkins, then Formula 1 doctor/medical supremo. It is not a biography as such, but more a chronicle of his involvement in the sport. This is one of those books which the reader will breeze through quickly, and emerge with a happy, satisfied and illuminated feeling. 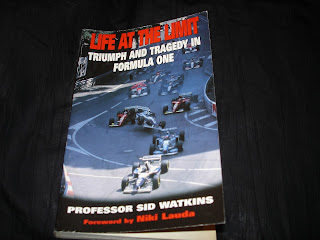 Although there are compelling accounts of some famous individual incidents, I was if anything more intrigued by the passages which addressed the struggles which Professor Watkins and his colleagues encountered in raising standards of medical back-up and safety, starting in the 1970s. In those early days it seems that arrangements were distinctly haphazard, and it is sobering to discover the gaps which existed before Sid and company, began to get to grips with the deficiencies.  Standardization and uniform excellence were still some way off in the old days.

In documenting his work and his experiences, Professor Watkins also shines a torch on the way of life travelling with the Formula 1 circus, and also what a small world he moved in. There are lots of amusing anecdotes and stories, and the author's dry sense of humour is a delight. In among the seriousness, the pressures and the grave matters at issue, it was still possible to have fun and be irreverent.

Some insight is given into various motor racing personalities, both drivers and non-drivers. Professor Watkins' friendship with Ayrton Senna is of course covered, and it is hard not to be moved by the chapters which deal with the events at Imola in 1994, as well as the accounts of Zolder 1982, Monza 1978 and so forth.

Life At The Limit is in places, and up to a point, a journey through the corridors of motor racing power, although the Professor is necessarily guarded, cryptic or reticent on some points. The remit of this book was really to tell the story of his own involvement.

Above all,  the reader will be lost in admiration and respect for Sid and his colleagues, for what they accomplished in helping people and in raising standards around the world. This is an entertaining and enlightening account of those times.