I recently finished the marathon effort of reading an abridged version of Edward Gibbon's The History Of The Decline and Fall of the Roman Empire.  It featured 28 of the 71 chapters in full, with summaries of the remainder. 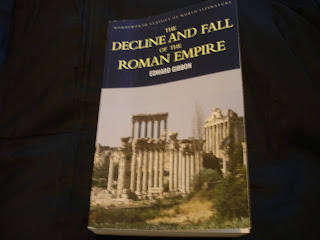 Even in an abridged format, this was a monumental tome. The work was written in the 18th century, so some views expressed seem dated, unsurprisingly.  However, it is hard to dispute that Gibbon could write, and his command, and evident relish, of language are startling, as is the confidence which the writing exudes.

As some have observed, Gibbon's trenchant opinions on certain matters, most notably religious topics, are often couched beneath sarcasm and irony, and it sometimes takes some attentiveness to determine precisely when he is being "literal".  Some of the passages in question only heighten the eloquence, whilst also providing some amusement.

The degree of vehemence, and level of sardonicism, are not uniform throughout, probably a consequence of the work being written over a period of some years. I was quite taken with his depictions of some of the religious fanatics of medieval times, and also with his less than glowing praise for the monastic lifestyle.

Basically, the period covered is from the 1st century CE through to the fall of Constantinople. The middle areas of this version of the book did become rather bogged down, for my tastes, with the theological disputes and conflicts of early Christianity, although once again the richness of the writing is difficult to fault, and helps to maintain the interest.

His views on Byzantium are perhaps what one would have expected of man of the Enlightenment, although they are somewhat at odds with much of the scholarship on that subject which appears these days.

Now that I have read this abridged version, I can definitely see what all the acclaim was about, and I am glad that I made the commitment.