Yesterday, prompted by the occasion of what would have been Freddie Mercury's 70th birthday, I decided that it would be a good idea to commit to blog form some of my thoughts about one of Queen's least remembered and appreciated projects, the soundtrack to the 1980 film Flash Gordon. 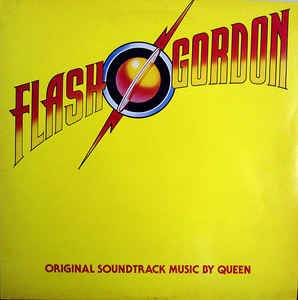 These days it seems to me that the album is regarded as an afterthought, almost as an aberration, and not really taken that seriously, a novelty or curiosity within the context of an overall body of work. However, whenever I go back and listen to the music, I am reminded what a compact and polished piece of work it is, within certain parameters.

I am not really qualified to comment with much authority on how the music complemented the visuals in the film itself, as I find it difficult to bring myself to watch the movie.  In fact, one or two critics have argued, rather persuasively, that Queen's music is one of the film's few redeeming features.

When appraising the Flash Gordon album, one must also bear in mind that it was recorded within a tight timeframe, sessions being squeezed in around the hectic schedule which Queen were pursuing around that time, and time had to be found alongside the band's myriad other commitments. The finished result is a quiet tribute to their resourcefulness and their talents.

Of course, the project represented a stylistic departure for Queen, with the preponderance of instrumentals and the heavy utilization of synthesizers.  The decision to make the soundtrack album "narrative" in nature, and to insert dialogue from the motion picture, was an inspired one. The whole "Flash Gordon" experience can be savoured without the need to subject oneself to the movie itself.

The songwriting and composition process must have involved different disciplines, too, with pieces written "to order" rather than coming from the heart. Many of the pieces do not make much sense outside the context of the soundtrack.  They were not seeking to make a magnum opus, but to create music to fit certain scenes, sequences and moods.

The title track and "The Hero" are to the clearly identifiable conventional songs, and they bookend the record.  Some of the instrumentals are "rock" with contemporary and modernistic embellishments, usually in the form of those synths, which Queen had famously shunned until not that long before this album was recorded.  There are some genuinely affecting and haunting melodies in there ("In The Space Capsule", "Ming's Theme" etc), whilst others are rather more prosaic.

So it is unfair to judge the Flash Gordon soundtrack album by the same criteria as one would a standard studio release. There are not as many accessible tunes as on the bland soundtrack albums which began to proliferate in the 1980s. This is, in many respects, a "true" soundtrack, in that the music is specifically designed to accompany and complement the visuals on the screen.

It is not a masterpiece by any stretch of the imagination, but it is highly enjoyable.