1971's Cahoots is often seen as continuing The Band's gradual decline in creative energy and vitality, but I do not necessarily endorse that assessment, seeing it more as the onset of a plateau. The album contains fewer "famous" songs than its predecessor, Stage Fright, but I don't see it as significantly weaker.

Stage Fright feels to me like a collection of distinct songs, mostly pretty good ones it must be said, if lacking the charm and mystique of those from the first two records released by the group. Cahoots is more impenetrable, enigmatic and dark, less straightforward to define and, on the surface at least, not as easy to love. Even the mix seems muddy, without the exuberant and sharp clarity of earlier works. 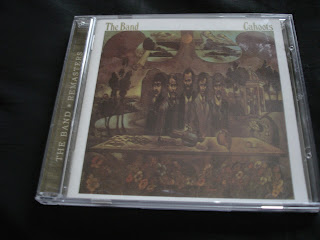 The two best known tracks are featured up-front at the beginning of the record, the New Orleans-flavoured "Life Is A Carnival" and "When I Paint My Masterpiece", composed by Bob Dylan.  The latter is a spirited and likeable effort, with some exotic hues, and elevated by an endearing lead vocal by Levon Helm. It evokes some of the mystery and the qualities which had made The Band so important and refreshing.

"Last Of The Blacksmiths" is a song which in style and tone might have sat comfortably on Stage Fright.  It is ideally suited to Richard Manuel's voice, and he is on fine form here.

Coming up next, "Where Do We Go From Here?" adds credence to the notion that in the early Seventies, The Band's songs were beginning to sound rather too similar to each other.  This may have been a symptom of diminishing creative powers. This number is harmless enough, but it does verge on the anodyne.

"4% Pantomime" is a collaboration with Van Morrison. It has a pleasant R&B character, and Van's contributions alone make it worthwhile, adding an extra dimension. The trademark "Band" organ sound is also much in evidence.  It is a shame that this combination (The Band and Van) did not join forces more frequently on record.

If one was feeling uncharitable, it might be contended that "Shoot Out In Chinatown" represents "The Band by numbers". It is hardly surprising that Robbie Robertson's ideas were less potent and inventive by this time, when one considers the extraordinary burst of fecundity in the period 1968-70.

Next up, "The Moon Struck One" stands out slightly, due to another heartfelt Richard Manuel vocal, and a more inventive, confident melody and arrangement, endowing the track with a more gripping, almost hypnotic atmosphere. Some passionate singing helps "Thinkin' Out Loud", along with Robbie's Robertson's understated but affecting guitar-playing.

Like many Band numbers, "Smoke Signal" has lyrics which are worth taking close notice of, even if the tune here is itself nothing out of the ordinary. As with much of the band's post-1969 output, the vocal harmonies have become too "regular", somehow eschewing the wonderfully ragged vocal style on Music From Big Pink in particular.

"Volcano" constitutes a welcome change, including some lively horns and a nice helping of Robbie's distinctive "brittle" guitar work. This song is minor, but entertaining nevertheless.

The record concludes with "The River Hymn", which is more cinematic in its scope than most of the other items here. A gospel feel is very discernible, with the occasional glimpse of the combo's former magic. It finishes the album on some kind of high note.

It would be erroneous to describe Cahoots as "uneven", because few of its songs really stand out for any reason. The intensity may be lacking, but the music is well-crafted as always, and it is also a document of where the group, and perhaps the world in general, was in the early 1970s. In its own way, it has a nebulous, quirky appeal.
Posted by Glenn at 14:44