In 1984, Queen released their album The Works, a record which warrants a little scrutiny.

At the time, this was regarded by many as a "comeback" record, after the band had gone on a mild hiatus, by the standards of the time. On the face of it, the album felt like a confident return to form and a more "classic" Queen sound, but it later transpired that this was a period of uncertainty, internal tensions and even a lack of self-belief.  The record is notable for containing more overt social and political commentary than Queen fans had become accustomed to. 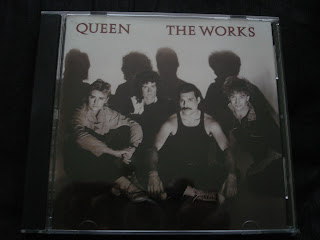 The reviews which cited a restoration of the traditional Queen style were not totally accurate. There are modernistic touches, and not a wholesale return to the multi-tracked ethos which had last been evident on 1978's Jazz. The sound is often "big", in a more 1980s sense, and this anticipates what would happen on Queen's remaining studio albums.

In mentioning the big production, I would assert that the production, and the temptation to dabble with the shiny new technology then coming on stream, sometimes masks the quality and impact of a few of the songs, such as "Radio Ga Ga" and "I Want To Break Free".  The songs from The Works often sounded better in the concert environment. By the same token, I can appreciate how the band was looking to experiment, and not just rely on the old techniques, the old sounds and the old gimmicks.

Whilst the sound on this record was more contemporary, I don't think that Queen can be accused of trying to be "trendy".  Yes, they were embracing new technology, but they were harnessing it to do their own thing, rather than attempting to appear "relevant" or hip.

The themes explored in the songs include nostalgia for a simpler, more innocent time ("Radio Ga Ga"), the dehumanizing effects of technology and machinery ("Machines") nuclear war ("Hammer To Fall") and Third World famine ("Is This The World We Created").  This subject matter was hardly original for the 1980s rock scene, but I don't think that it was a consciously orchestrated thing. It is not surprising that "baby boomers" would wish to express anxieties concerning such matters.

Although some of the songs address areas of concern, others have words which are more anodyne, not really saying anything of note.  "It's A Hard Life", "Tear It Up", and "Man On The Prowl" lack any real incisiveness. They do not possess the fire which would return to the band's work in the late 1980s.

The Works has a sound which is bright, clear and vibrant, and not quite descending to the characteristically irritating level which mars so much 80s pop/rock. Much of the recording was done in 1983, and the malaise of 80s music had at that stage not yet fully taken hold. On this record Freddie Mercury is in pretty good voice, and the deterioration in his vocals which surfaced on A Kind Of Magic is scarcely discernible.

This record exudes a self-confidence which may have been illusory, belying the atmosphere and mindset which prevailed in the Queen camp. On the surface, ideas seem to be flowing in relative abundance. Little in the way of introspection or self-doubt can be detected in the lyrics.  They are looking outwards, not inwards. Those looking for "clues" will find few. The fact that all four band members, with disparate personalities and temperaments, wrote songs on their own meant that it was rarely easy to detect a general mood (until the final two albums) - a contrast to the career paths of singer-songwriters, or bands with one dominant composer.

"Keep Passing The Open Windows" is an interesting song, musically sharp and ebullient and with a strong message. It has recently occurred to me that there is a Elton John-like feel to the piece.  Some Queen hallmarks are in there, but the tune is energetic and animated.

The album version of "I Want To Break Free" is much better than that released as a single, as the keyboards are less prominent and guitar more to the fore.

"Man On The Prowl" is for me one of the weaker Queen album tracks, and probably owes its inclusion in the running order to the fact that it is anonymously catchy as a genre exercise,  and that it is different to the more futuristic and profound material which surrounds it. Other, superior, songs may have been in circulation at the time, but were probably too similar to others which made the cut.

One song which did not make the original album, appearing as a B-side, was "I Go Crazy", a spontaneous and infectious number which sees Queen in "garage band" mode, singing some amusing lyrics. It is a mystery why room was not found for it.  Perhaps it lacked a certain polish.....

The Works is enigmatic, taking Queen in new directions whilst holding on to trademark elements. It still holds up pretty well, certainly in the the context of the group's offerings from their "later period".