There exists in the rock music world a "pantheon", reserved for those artists deemed to be the most influential, creative and innovative. The Beach Boys are generally in there, but I get the feeling that for some this is a rather grudging accolade, and they are in some respects still misunderstood and underrated.

Several reasons can be put forward to explain why The Beach Boys' image is nebulous. Their career was long, fragmented and frequently messy. There was little of the bookended tidiness which characterized the reign of The Beatles.

Some even accused them of being "derivative" of people like Phil Spector and Brill Building pop, and of course some of their early material contained riffs and rhythms reminiscent of Chuck Berry. Let's face it, though, most bands and singers wear their influences on their sleeves early in their careers.

The very name "The Beach Boys" didn't exactly help either. It propagated the idea, in the public consciousness, that they were inextricably linked with sun, sea and surf, and it was something of a millstone in that respect. Even relatively early in their career The Beach Boys were producing work, such as "The Warmth Of The Sun", "In My Room" and "Don't Worry Baby", which exhibited a reach and an outlook which utterly outstripped most of their contemporaries and also transcended the constrictions of whatever "scene" they might have been associated with.

One can see, with closer analysis, that these early gems were pointing the way forward towards "Pet Sounds", "Smile", an so forth. A view of human emotions and love which went beyond the cliched depictions which were so prevalent in pop music at that time, into something almost spiritual in nature, complemented by the sometimes otherworldly beauty of the music, especially the vocal harmonies. Direct comparisons are invidious, but I would say that The Beach Boys were at the very least "level" with their British counterparts in 1964 or thereabouts, both in technical terms and in the emotional and philosophical depth and maturity of their outpourings. 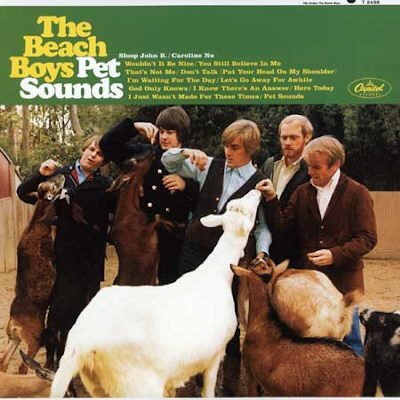 It is often difficult to escape the feeling that people do not really listen to Beach Boys records. They go into it with preconceived notions of what the music is, and what it represents.  The true nuances and charm of the music, the originality of the arrangements and the strength of the concepts, pass them by.

"California Girls" has been seen as a turning point, or a watershed of sorts, because of the circumstances under which it was conceived by Brian Wilson.  Some of the advances present in the song are subtle and almost imperceptible.  However, the wonderful introduction is striking to behold, and there is a sense of greater scale and sweep.  The Beach Boys were subject to the same influences and "revelations" which were expanding the horizons of rock's other principal exponents in the mid-Sixties. A certain spirit can be detected in "California Girls", as if a door was slowly being opened onto a new and more colourful vista.

"Pet Sounds" very much bears the stamp of Brian Wilson. It does have a coherent flavour, if we conveniently overlook the fly in the ointment that is "Sloop John B".  Brian does much of the singing on the record, and the arrangements throughout have a uniformity.  The power of some of the songs is almost overwhelming ("Wouldn't It Be Nice", "God Only Knows", "Don't Talk (Put Your Head On My Shoulder)", "Caroline, No"). It makes few compromises, and this contributes to its artistic weight, because it makes an overall statement about the auteur's view of himself and the world around him. Uncommercial, maybe, but the single greatest album released by The Beach Boys during their peak years.

Not long after "Pet Sounds", things began to fall apart, although "Surf's Up", arguably the group's greatest individual song, was originally spawned by the "Smile" sessions, eventually being completed and surfacing in 1971. The "Smile" songs and ideas display breathtaking ambition and originality, in advance of almost everyone else around at the time.  Of course, not all of these ideas were properly realized, and some would opine that the project was excessively experimental.  However, it is a sign of how far rock music had come, and of how visionary Brian Wilson had become.

So, for me a reappraisal of The Beach Boys is long overdue. I don't always think that they the general public admires them for "the right reasons". They should be revered for their sublime earlier masterpieces, and the fruits of the "Pet Sounds"/"Smile" era, but all too often the public (and the mainstream media) place excessive weight on the chirpy "surf" tunes.

The Beach Boys did not display the same consistency, stability and concentrated creative staying power as The Beatles and others, but at their very best they produced pop/rock music which has seldom been equalled.