Many years ago, when I was first getting into the whole folk-rock/singer-songwriter genre, Crosby Stills and Nash (and Crosby, Stills, Nash and Young) were an obvious port of call.  However, before too long, as my radar logically encompassed yet more artists and bands, the CSN sound suddenly appeared somewhat anemic and lacking in grit by comparison.

I have always felt that CSN/CSNY were at their strongest when the trademark vocal harmonies were based around either a basic acoustic folk foundation or a more "aggressive" rock backing. The "third way", prevalent on the debut album from 1969, doubtless buttressed the group's "counterculture" credentials, but it has not necessarily aged that well. 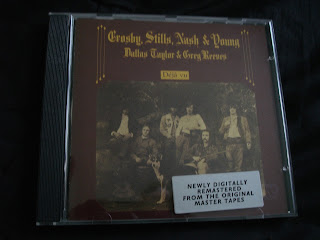 Deja vu leaves me with a good feeling. It is a satisfying work which although eclectic, packs a coherent punch. The impact of Neil Young might actually have been less than is sometimes imagined, but there is genuine substance to the end result. I would go so far as to say that Deja vu is a bonafide rock album, whereas the previous Crosby, Stills and Nash record was "folk-rock".

There is a harder edge to the performances, and also to some of the subject matter being explored. The material is pleasantly balanced in tone and content, and has more of a "group" flavour to it.

So what about "the Young effect"?  He doesn't appear on all of the tracks, but his guitar work enriches proceedings, and "Country Girl" has real mystique. On reflection, it may be that the mere hiring of Neil, and his presence, prompted a new dynamism, by causing the others to raise their game and find new impetus and inspiration.  "Helpless" is widely admired as a song, but frankly I have always felt it to be rather hollow.  Well performed, yes, but by Young's standards, unexceptional.

I had a tendency to view Graham Nash as a "junior partner", but the more I learn the more I realize what a vital role he played in making this combo function. His spirit and enthusiasm were crucial, and his instrumental contribution was greater than is often thought.  His two songs "Teach Your Children" and "Our House", with their simple melodic sensibilities, perfectly complement the more outlandish offerings elsewhere on Deja vu.

David Crosby's part was equally important;mercurial and quixotic, and occasionally sublime.  The title track is admittedly an acquired taste. "Almost Cut My Hair" has attracted some hostility and ridicule, it would seem, but I fail to see why. It contains some sizzling guitar playing by Stills and Young, and an expressive vocal, and it manages to be both coherent and edgy.

On Deja vu, each song has a strong and distinct identity. The sound is rich, warm and uncluttered, inviting the listener to embrace it. Considering the cultural context in which this record was made, there is comparatively little in the way of preaching and moralizing.

"Carry On" is a strong opening number.  I know that some people will see it as "CSNY by numbers", but it has a freshness and an unwavering incisiveness which permeate much of this LP. The cover of Joni Mitchell's "Woodstock" exudes commitment and intent, and is further aided by Still's bluesy vocal delivery and a nice, breezy production.  "4+20" is the one nod on the album to traditional, stripped down singer-songwriter folk, and it is a good showcase for Stills' talents.

Deja vu is a fine document of an era, and also a jolly good rock album.