Having thoroughly enjoyed two of Christopher Clark's other efforts, "Iron Kingdom" and "The Sleepwalkers", I was eager to see what his book about the last German Kaiser was like.

The book feels much more streamlined than the others, with little in the way of preliminaries, and we go straight into the early stages of the subject's life. The author emphasizes that his aim is not to present a straight biography of his subject, but to examine and weigh his relationship with, and exercise of, power. With this in mind, the book is not structured in a strict chronological order, but rather dedicates specific chapters to individual aspects of Wilhelm's reign and stewardship. 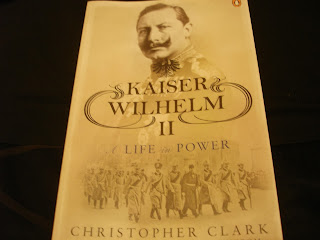 I detected the main thrust to be the fluctuations in Wilhelm's fortunes, and the ongoing battle of wills and wits with the Reichstag and with his ministers and advisers.

There is a look at court life, and Wilhelm's military tutelage and education.  On the surface, the latter would seem to have boded well for a balanced, relatively enlightened approach, but the author argues that it may have contributed to later failings, by encouraging disjointed and uncoordinated views.

Clark documents the shift in Wilhelm's stances, citing the influence of both his grandfather and his wife.  I would have liked to hear more about the precise reasons why and how this came about, other than the supposed rubbing off of certain people's attitudes on the future emperor. Was he just an opportunist, seeing as he got older the potential for carving his own niche?  Did this in turn make Wilhelm more susceptible to manipulation and intrigue by others, for their own ends?

The early stages of the book afford a tantalizing glimpse of how history might have worked out differently had Friedrich III not succumbed to cancer after a very brief reign.  The relating of Wilhelm's fractious relations with his parents is quite illuminating.  Even at a comparatively early stage, he was having to demonstrate and assert his independence from cliques and conspiracies, and the very nature of the German system of that time may have encouraged that sort of thing.

Clark does his best to explain how the idiosyncrasies of the imperial and Prussian systems impacted on the Kaiser's conduct of his office, and clarifies one or two misconceptions about how "absolutist" the situation was. One of the most valuable sections of the book is that dealing with his relations with Bismarck, and his part in the downfall of the "iron chancellor".

As regards Wilhelm's views, there is more evidence to support the notion that he disliked economic liberalism, although on the surface his stance on some social issues seems reasonably admirable. He may have been acting as a "chameleon", currying favour with various sectors of society in order to court popularity. A clever decision by Clark here is to use relatively "mundane" topics to demonstrate trends and traits.

The author has some interesting things to say about Wilhelm's apparent lack of closeness to the German military just prior to the 1914-18 war, and also the amount of control exerted by the civilian politicians during those crucial days. He may have been "militaristic", but Clark expresses doubts as to how much this translated into action before the war.

The closing chapters of the book examine Wilhelm's role in the war, his attitude to unrestricted submarine warfare, and his eclipse by Hindenburg. There is also an intriguing, if brief, look at his period in exile in the Netherlands, and his views on post World War One developments in Germany.

Not as intoxicating a read as a couple of Clark's other efforts, but a high quality read nonetheless...