In The Name Of Glory - Tom Rubython

Continuing my post-season reading efforts, I have recently completed another book which formed part of my Kindle "backlog".  This was In The Name Of Glory by Tom Rubython, a study of the momentous 1976 Formula 1 season, and more specifically the championship contest between James Hunt and Niki Lauda.

The author does have his detractors amongst racing enthusiasts, and it has to be said that the subtitle of this book (1976 - The Greatest Ever Sporting Duel) hardly inspired confidence.  However, I was prepared to give this one a chance........

The most noticeable thing at first glance was the brevity of this publication, certainly in comparison to the two other Rubython ones which I have previously read, The Life Of Senna and Shunt, the latter of which I blogged about here:-

Shunt - The Story of James Hunt

A couple of contentious assertions early on in the book rather set the tone for me, particularly the one concerning Lauda's supposed attitude to losing the championship in such circumstances.  What is said runs totally against the grain of the majority of perceived wisdom on the subject.  Also, it is stretching things to imply that the 1976 season was uniquely dramatic, exciting or eventful. 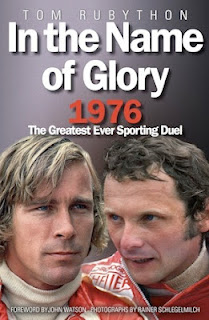 The book contains a few factual errors.  Lauda's debut in Austria in 1971 is not mentioned, and he did not win the 1974 Belgian Grand Prix. There was no Canadian Grand Prix in 1975, and Haiti is not in South America.  These things tend to grate after a while....

The thing which most perturbed me, though, was the tendency for hyperbole and exaggeration.  Personality clashes, or personality traits, of certain individuals are laboured excessively, presumably to heighten the sense of abundant frisson.Motor racing, like life in general, tends to be a subtle and complex endeavour, and therefore best seen in a million shades of grey.  However, here the author seems at pains to interpret things in extremes. Where the 1976 season is concerned, this is unnecessary, as the reality was in itself sufficiently remarkable...

To suggest at one point that Luca di Montezemolo was solely responsible for Ferrari's mid-1970s revival is also a novel interpretation of events.  I dare say that Messrs Lauda and Forghieri would have something to say about that.  This is an example of the author's "all or nothing" approach to some topics.

There is an appraisal also of the feverish politics which supposedly gripped the Ferrari camp around that time, especially when di Montezemolo became less involved in the Formula 1 effort.  Again, there may be a little embellishment, but one can gain a good idea of the backdrop to Lauda's campaign, and these passages should be of some value to those not previously familiar with the stories.

There is much prurient, if entertaining, focus on James Hunt's lifestyle.  Where the book did score some bonus points for me was in its efforts to detail Lauda's upbringing, and his early racing activities, including the way in which he raised finance, and incurred the wrath of some family members along the way.

Unsurprisingly, much of the Hunt-orientated material will be very familiar to those who have read Rubython's Hunt biography.

For all my reservations about the book, the raw facts of the story are enough to make this an entertaining read, if one takes some of the author's flights of fancy with a pinch of salt.