When it comes to motion pictures about the sport of motor racing, the record of success would have to be described as mixed at best.  Indeed, I have seen and heard a few observers venture the opinion that some of the worst creations ever committed to celluloid have been motorsport-related.  However, a few efforts shine like a beacon amongst the general mediocrity, and remain vaguely definitive.  One of these is the 1966 movie Grand Prix, directed by John Frankenheimer.

It was an opportune time to be conceiving a film about Grand Prix racing.  In 1966, the new 3-litre engine formula was instituted, and a new breed of more meaty and muscular machines entered the arena.  These cars looked and sounded more dramatic and imposing than their 1.5 litre predecessors.  The elegant European aesthetic of the mid-1960s was also a strong ingredient in the movie's appeal.

As well as taking advantage of circumstance, the producers carried off a master-stroke by enlisting the co-operation of the Formula 1 circus, or at least most of it.  By filming at the actual venues during the race meetings, they imbued the picture with an authenticity with most other examples of this sub-genre have manifestly lacked. 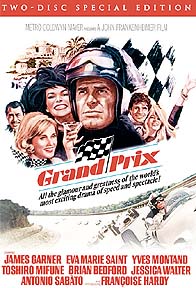 As for the plot, well if not totally implausible, then it errs decisively towards the "Hollywood".  Not that most of the events depicted have not occurred in real life, but not condensed into just a few months, and revolving around a few select people! To some extent, any misgivings concerning about the story-line are ameliorated by the movie's excellence in other departments....

One of the areas in which Grand Prix excels is in its cinematography, the race action sequences being highly accomplished and advanced for their time.  Indeed, these portions of the film even stand up to 21st century scrutiny. In a wider sense, the film is visually luxurious and sumptuous, trouble seemingly being taken to focus on landmarks and the opulent.

Of the actors involved, I find James Garner's performance as Pete Aron to be the most convincing and impressive.  Garner capably constructs Aron as something of an outsider, a strong and silent type.  Hardened and quite cynical, but at the same time a humane and sensible figure.  Garner's overall plausibility and impact in the role may be related to his apparent affinity for racing.

The other performance which I find both credible and accomplished is that of Jessica Walter as Pat Stoddard.  She comes across as what might have been the public's perception of the typical racing driver's wife of the time, but the character is believable, and as an added bonus Ms Walter is very easy on the eye!

Yves Montand is assured as Jean-Pierre Sarti, evoking the gravitas but increasing weariness of a Fangio-esque elder statesman. It has to be said that some of the other actors did not work quite as well in their roles, whatever those with rose-tinted glasses may say.  The poor acting in places is an irritant and a blemish, even if it is unlikely to perturb unduly the people who will view the picture.  Some of the acting by the racing drivers is cringe-inducing, but they can be excused!

Having said that the elegance and stylishness of 1960s Europe is an enticing backdrop to Grand Prix, it also sometimes strikes me that 1960s motor racing was quite conservative, "square" even, when compared to other arenas of cultural endeavour of the time.  The "dolce vita" ambience therefore could be viewed as a touch dated, whatever its seductiveness.

The film does convey the sense of community and togetherness which, by all accounts, prevailed in those days in the racing scene, and which is so often cited as one of the main ways in which the sport has altered in the ensuing decades.  At the same time, the increasing professionalism and commercial pressures are not totally overlooked.  It was not always about camararderie and chivalry...

As is obligatory in racing films, there is much philosophising about the dangers and risks, although in fairness this is not done to excessive lengths or in a sensationalistic way.  The dialogue on this subject, and related matters,  is comparatively mature and understated, rarely descending into mawkishness.  For example, the scene outside the pub after the British Grand Prix, involving Sarti and Louise Frederickson, is very well judged.

One criticism which I would level against the script is that there is occasional superfluous "fluff", mostly in the downtime when the cars are not on track.  Although it can be contended that these passages would appeal to the "general" audience, discarding them would also have made the film shorter in length.  Perhaps they should have made an "alternative" edited version, cutting out the more frivolous parts, for the benefit of petrolheads?

The movie's makers deviated from the real 1966 calendar by having the Italian Grand Prix at Monza as the final race of the season, and also by staging the race on the old banked circuit. For dramatic effect, these decisions were perfectly understandable. The Monza sequences are beautifully constructed, with the circuit  presented as the inspiring "cathedral" of motorsport.  Tension is created, and many of the strands and sub-plots coalesce.

Granted, the four-man championship showdown may stretch credulity for some observers, but the nature of the race itself was not too dissimilar to many Grands Prix which took place at Monza during that period! The final scene of the entire movie is one of its most masterly and evocative, with James Garner strolling down the pit straight at Monza, in front of deserted grandstands.  Spine-tingling stuff....

Despite the reservations, Grand Prix remains a great looking and sounding film, and to a large degree effectively captures the organic and analog F1 of the mid-1960s.  It remains amongst the most credible mainstream movies made about auto-racing, and the much-hyped and anticipated efforts of more recent times have almost without exception failed to hold a candle to it. It is still a benchmark of sorts. The conditions under which Frankenheimer's work was made will in all probability never be replicated, and this  militates against something matching it.  Technology and finances are no substitute for realism, passion, ingenuity, and that intangible "magic"....