The Day Of The Jackal - Frederick Forsyth

Some time ago now, I wrote an article on the superb 1973 film The Day Of The Jackal, based on the novel by Frederick Forsyth:

The Day Of The Jackal (film)


Well, I have just finished re-reading the novel itself, and thought that I would share some additional thoughts on it.

For the uninitiated, most of the plot deals with a fictional account of an attempt by a hired assassin to kill President Charles de Gaulle.

If you have already seen the movie, you will note some differences in the locations, characters and sequences of events.  The film's makers clearly decided to condense and streamline the "script" in order to cram the story into a manageable running time. However, these amendments are not to the extent of being confusing, or undermining the feeling of harmony between novel and motion picture.

Naturally, there is much more scope in the novel to flesh out and examine the political and diplomatic background to the events, and I found this aspect of the book fascinating, the author striving to strike a balance between appearing comprehensive and the need not to weigh things down with superfluous detail. Some of the characters, both those involved in the plot, and those in French government and law enforcement, are not portrayed in very sympathetic terms.  Many come across as much more reactionary and blinkered than is visible in the film, where we only see them fleetingly. 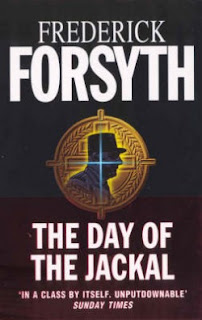 Some may sneer and view The Day Of The Jackal as in some way shallow and lightweight.  Granted, it is difficult to describe it as high-brow literature in the conventional sense, but that is to miss the point.  Judge it on its own merits, and on what it is seeking to achieve, and it is compulsive and engrossing, as well as representing a prime slab of "escapism".  Especially gripping is the way in which the subterfuge and suspense are built up, and how the Jackal's preparations and the frantic police inquiries unfold in parallel, even if the Jackal is usually that one step ahead of his pursuers.

One of the most immersive things about this novel is its cosmopolitan nature, the drama played out in numerous European locations, and we are given a flavour of what must have been the prevailing atmosphere and lifestyle circa the early 1960s, almost "dolce vita" in character, it seems., when the world still felt "analogue". In amongst this we also see ruthless, cold-blooded behaviour and plotting; a curious but powerful cocktail.

Another thing which occurred to me whilst re-reading The Day Of The Jackal was the level of internal squabbling in the corridors of power.  The general tenor of the novel supports the notion that the author's research was thorough and accurate, and that the tensions depicted therefore have a ring of authenticity.  One would earnestly hope that this kind of thing is not as pervasive in today's world, and that the pressure of events, and simple expediency have helped to dissolve some of the obstacles and bureaucracy, and instill a more streamlined and nimble ethos.  One is also reminded that even in the early 1960s, people were being required to forsake some freedoms and liberties on the pretext of combating crime and terrorism.

To me, the story seems plausible, and not inflated or sensationalised. The latter are not needed, as the central premise is gripping enough.  These, together with the way in which the tension, suspense and desperation of the protagonists are outlined and related, are the essential ingredients of the book's appeal and success.  The minutiae of the detective work undertaken will also enthrall those, like me, who relish that kind of thing!

On reflection, it might be preferable to read the book before watching the movie, as the latter will then make more sense, as one will be equipped with a fuller and deeper understanding of the underlying political issues which triggered the crisis.

Either way, The Day Of The Jackal is one exciting and pulsating read....